I'm in a big rush today, so I'll be doing this post using my new Microsoft Voice-to-Text Typing and Image System. It's great - all you need to do is speak and appropriate text and images appear like magic! The future is now, huh? Aside from a few kinks it's worked perfectly so far, so let's get started.

The Sharks finally know who their opponent will be for the Western Conference Finals: The Chicago Blackhawks.

It should be a great series!

The Chicago Blackhawks have been around for a long time, but for most of the years I've been paying attention to hockey they've been really crappy. The Sharks and Blackhawks don't have a lot of history and there's no great rivalry, so it's difficult to build up the necessary vitriol after playing the hated Avalanche

And as everybody knows, all the best writing comes from a deep pathological hatred

so I'm going to need to generate some animosity if I'm going to do any real quality writing (Editor's note: Why start now?).

Let's focus on our target here: Chicago. Computer - please display an image to represent the Blackhawks:

Sorry about that folks. I hope nobody was too traumatized or aroused. Moving on!

What do I know about Chicago, the city? Not a lot. So I did what I always do when seeking knowledge: go to Wikipedia and accept everything it says blindly and without context! Wheeeee!

Chicago's nickname is "The Second City," which is confusing. What could it mean? Either it means that Chicago was the second city founded in the United States, which is wrong, or that it's the second-best city in the country, which is wrong and pathetic.

Oh, here we go - it refers to how the city was rebuilt following the Great Chicago Fire. That's okay I guess. Although I'd say that Mrs. O'Leary's cow was just trying to do the rest of the country a favor.

Let's see, what are some notable things about Chicago? Oh, I know...

Hey Chicago, great job on the 2016 Olympics. Way to make our President look like a douche-bag. 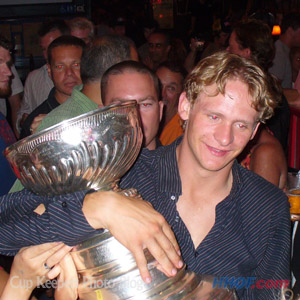 It's also called "The Windy City." What's the deal with nicknaming your city after weather? If we followed that logic here, every city in California would be "The Sunny City." Also, wind sucks (or blows, if you aren't pun-intolerant). Whoever came up with that nickname must have wanted smart people to stay the hell away from Chicago. And guess what? It worked!

But hey - at least it's not Detroit, right?

Turning our attention to the players on the Blackhawks, this is a team with a lot of talented forwards. I'm talking about guys like Jonathan Toews, 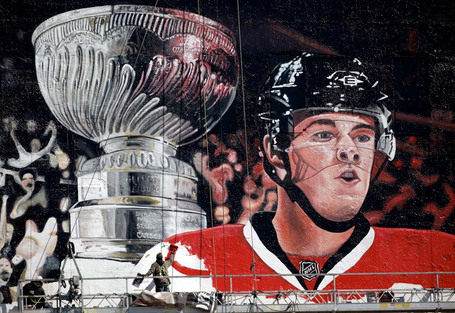 and the amazing twelve-year-old Patrick Kane,

and a solid (though new to the playoffs) goaltender.

This won't be an easy series with guys like that in the lineup. This post-season for the Sharks has been one challenge after another, and it's only going to get harder. Despite the prestige attached to the Red Wings, they are not as good as the Blackhawks. It's only natural that the Western Conference Finals will come down to the two true powerhouses in the West, San Jose and Chicago. Whoever emerges victorious will most likely be bruised and exhausted, but they will be battle-hardened and prepared to face whatever joke-of-a-team comes out of the East.

Prediction: Sharks win in 6. Five seems too few and seven seems too many.