1) The Brunette-to-Blonde Paradox.  I'm a brunette man myself, always have been.  Blondes are weird, usually dumb as hell and are probably Nazis so I don't mess with them.  And yet if you see a girl who is a brunette and then see her after she's dyed her hair blonde she looks way, way, way hotter.  Take Jessica Alba, for example.  Here she looks hot as fuck.  Here she looks HOT AS FUCK.  Or take Laura Prepon (she's a redhead but she'll work).  Here?  Ugly.  (Redheads are gross.)  Here?  Still not great, but better.  It's weird, and it doesn't make sense, but it's true.  It's... a paradox!

3) The Hot Blonde Eating a a Banana Paradox.  Hot blondes eating bananas gives me a boner.  ...Wait, that's not a paradox at all.  That actually makes a lot of sense when you think about it.  I guess that's a theory that requires more study. *unzips pants

Recently I have moved on from physics and am now concentrating on evolutionary biology.  Specifically, I'm concentrating on faces.  We all know Sidney Crosby, hockey player extraordinaire.  He's really, really good at the sport of hockey.  He's arguably the best hockey player in the world.  He's won a Stanley Cup and an Olympic gold medal at the age of 21.  He is truly a great hockey player.

And yet, everyone thinks he's a little bitch.

Ladies and gentleman, I submit it is because Sidney Crosby suffers from Hayden Christensen Syndrome. 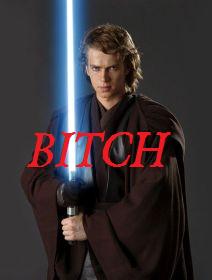 Hayden Christensen, as you know, is the little bitch that ruined the Star Wars movies.  He's also ruined Life as a House (where he's supposed to play a brooding teenager but comes off as a little bitch), Jumper (where he's supposed to play a brooding 20-something but comes off as a little bitch), and was surprisingly good in Shattered Glass (because the role he's playing is that of a little bitch).  Now, I'm sure Hayden Christensen isn't actually a little bitch; there are probably some unbitchlike qualities about him.  But his accentuated eyebrows, his puffy lips, and his rosy cheeks make him look like, well, a bitch.  Even his name, "Hayden," sounds like a little bitch name.  It's not his fault, it's just fact.  The reason guys like Sam Worthington, Vin Diesel and Ed Norton with a goatee can get roles isn't necessarily because they're great actors; it's because they can look mad without also looking like a little bitch.  It's harder than you'd think. 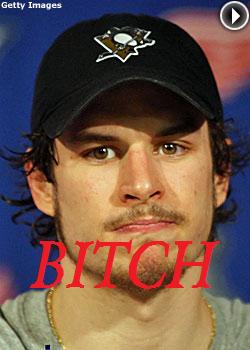 Sidney Crosby suffers from the same afffliction.  Like Christensen, Crosby has accentuated eyebrows, soft, pouty lips and flushed cheeks.  Like Christensen, Crosby has a girly first name.  And like Christensen, it's impossible to take Crosby seriously because he looks like, well, a bitch.  Think about when Crosby whines and compare him to two other big whiners, Ryan Getzlaf and Teemu Selanne.  Ryan Getzlaf looks like he's about to tempt Faust so his whine face is a, "What the fuck is wrong with you?" look.  Teemu Selanne raises his eyebrows in disbelief, like he's saying, "How the fuck could you make that call?"  Sidney Crosby's whine face looks like he's saying, "But I was going into Tashi Station to pick up some power converters!"  He just looks like a bitch.  In the macho world of hockey, that's a death sentence.

Of course, the big difference between Hayden Christensen and Sidney Crosby is that Christensen has to emote as part of his job; Crosby just needs to play hockey well.  I know it's hard because Jesus do I want to punch Crosby in the face, but you need to look past his elementary school teacher's pet appearance and notice the good hockey player underneath.  He's good.  Appreciate it.  And just try to ignore it when he whines to the ref and it looks like he's every youngster in a cowboy movie ever.