Sharks Gameday: The Life and Times of Joe Pavelski

Share All sharing options for: Sharks Gameday: The Life and Times of Joe Pavelski

The Sharks and the Red Wings play tonight (stupid Eagles, making me wait an extra day. Hotel California sucks!). Game one started beautifully for Team Teal before settling down into a nail-biter. I was happy with most of the play from the Sharks, and they definitely made a statement by taking game one. It wasn't a perfect game but it was the win the Sharks needed, and now the team needs to keep up the pressure and watch themselves defensively to go up 2-0.

Joe Thornton, Dany Heatley, and Dan Boyle all had strong games for San Jose, but once again the most dominant, outstanding, clutch, incredible, world-shattering, glorious, unstoppable player on the ice was THE BIG PAVELSKI. For many people not familiar with our boy Joe, it may seem as if he has come out of nowhere. Prior to this post-season, many believed he was a second-line forward at best*, and certainly nobody expected him to be THE impact player in April. As a service to those poor souls out there who might not know much about the Incredible #8, I present the following:

Who is Joe Pavelski?

Joe Pavelski comes from a long line of inspirational figures. His grandfather, Dawid Pavelski, was a Polish hero in WWII, working tirelessly in the screen-door submarine division before transferring to the air-force and working as a kamikaze pilot and flying 27 missions. His great-uncle Otto was the captain of the first ever Polish hockey team until the entire squad tragically drowned during Spring training.

Joe Pavelski was born on July 11th, 1984, which makes him a Cancer. Cancers are sensitive, introverted, and can be difficult to get to know. Cancers bond best with either Pisces or other Cancers. On the Sharks' roster, Pavelski is most compatible with fellow Cancers Joe Thornton and Dan Boyle, which explains why the three of them are often seen hot-tubbing together and walking on the street holding hands.

Pavelski's birthplace, Plover, Wisconsin, is famous for bring the first city in America to be named as the result of a typographical error. A quick scan of the town's wikipedia page reveals a bloody history of brutal battles over municipal incorporation. It also shows that Joe Pavelski is by FAR the most famous person ever to come out of Plover, and he would likely be elected mayor for life if he ever decided to return to the frigid hellhole of his birth.

Many people believe Joe started playing hockey at the age of two, but this is inaccurate. He actually started as a zygote, and his tough physical play caused his mother a great deal of distress during her first trimester of pregnancy.

Joe Pavelski has been a winner throughout his career, starting in high-school playing for the SPASH** Panthers and winning the State Hockey Championship. He was unable to escape Wisconsin's icy clutches during his college 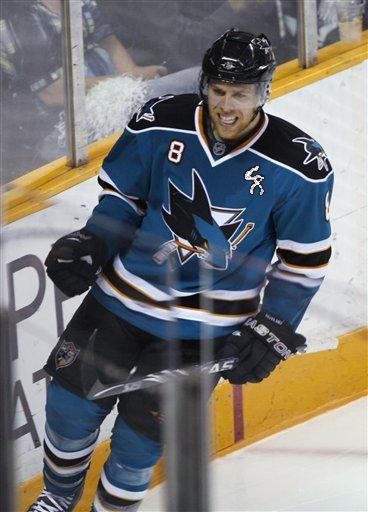 years, and the fury he felt at being trapped in that miserable state drove him to new heights, leading his team in scoring on the way to their championship in 2006.

The San Jose Sharks drafted Pavelski in 2003 in the 7th round, taking advantage of the league's well-known bias against Wisconsinese players. He made an immediate impact on the team when he joined the squad in 2006 before suffering an unfortunate leg injury  (a typical Cancer problem). Since then Pavelski has been making more of an impact each year, and this season he emerged as an Olympic and post-season star.

And finally, because I care about you, my dear readers, I'll share a little bit of information about the FUTURE of Mr. Pavelski.

I'm not supposed to do this - the President of Time got really mad at me last time for spilling the beans about the future - but I'll risk it for you people. The Sharks will re-sign Pavelski to a five-year contract and will want to reward him by giving him the captain "C," but the team will decide that isn't enough of an honor after Joe's playoff performance. Instead they will invent a new letter and symbol to place on his jersey, and Pavelski will be the first player in the league to have a "bleert" on his chest. Being the team's bleert will allow Pavelski to review all goals in the game to ensure they are sufficiently awesome. Additionally, he will be permitted to take all three shots during shootouts, for both teams.

* = not me, of course. I never doubted his abilities. I said a long time ago he is comparable to Paul Stastny. People called me crazy, but WHO'S CRAZY NOW? HUH? JUST BECAUSE I WEAR TOAST IN MY PANTS YOU THINK I'M CRAZY?