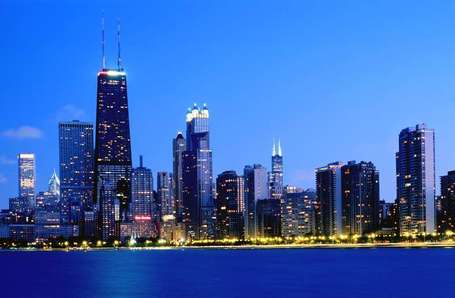 "A facade of skyscrapers facing a lake and behind the facade, every type of dubiousness."

"I think that's how Chicago got started. A bunch of people in New York said, "Gee, I'm enjoying the crime and the poverty, but it just isn't cold enough. Let's go west."

The Sharks come into the site of the 2016 Olympics the beautiful city of Chicago down two games to none in the series, and, predictably, the doom-sayers and Shark-mockers have come out in full force. These folks haven't had much to do so far this post-season, aside from being their normal wonderful selves early in the Colorado series and then rearing their ugly heads after the loss to Detroit, but now they've come out of their slimy holes and started belching their hateful halitosis all around the hockey landscape. They say the Sharks are done, the say that Thornton's a choker...yeah, we've heard it all before.

So far, the series has been a disappointment for the Sharks, but there's no reason to go into panic mode or start throwing players or the entire team under the bus. Be calm, my Shark fan brethren. This team is really really good, remember? They only lost three games in a row twice in the entire season. And they've actually looked BETTER in these two losses then they did during their early games against the Avalanche. Aside from some regrettable miscues and some soft goals by Nabokov (things the Sharks have been dealing with all season, even during winning streaks) the play thus far has been even. I know that wins are the only things that matter in the end, but there's a huge difference between being down 2-0 like Montreal was after their first two games, held scoreless and looking completely out-matched, and being in the Sharks' position, having kept games close when facing one of the most talented teams in the league.

Some quality analysis from Copper and Blue:

For San Jose, I don't know if there is much that Todd McClellan can change.  His lines are winning the chances battle and the Corsi is even.  Unless he can cast a spell on Nabokov or turn Thomas Greiss into Olaf Kolzig, circa 1998, the Sharks are in trouble.  If I were to show these two chances charts with names redacted and asked for a winner, the nearly universal answer would be the Sharks.  Copper & Blue favorite Logan Couture isn't getting a regular shift and has been a non-factor.

It's only a matter of time before things turn around for the Sharks. These stats and this kind of analysis is just what we saw against Colorado early on - the Sharks had the edge in numbers but weren't getting the wins.

I totally agree about Couture. I'd like to see more play from the Sharks 3rd and 4th lines. Everyone has been talking about how Chicago has superior depth at forward, but the stuff I saw from Nichol and Couture earlier in the playoffs makes me want to put them out on the ice more often. Couture has the skills and Nichol is on the team specifically because of the grit and edge he brings to playoff games.

Playing in Chicago the Hawks will get the last change, and that's fine. Don't worry about matching lines too much, since it obviously isn't producing results. Remember the early Colorado games, where the Sharks would look flat and then the Nichol line would come out and generate some awesome pressure, tiring out whichever opponents were on the ice? We need more of that. Nichol and Couture both had about 8 minutes of ice-time last game, which is a good start (far better than what we saw against Detroit). The Sharks are quality from top to bottom, as are the Hawks - let's just see what happens.

This guy is rapidly becoming my nemesis. He wrote another article for Puck Daddy that's full of random pronouncements not backed up by any facts - that's our job at BOC, buddy! He writes about Joe Thornton's frustration and how it's affecting his play, and basically the whole thing is a cliché smoothie. He even talks about what a great leader Sidney Crosby is* for channeling his frustrations in the proper ways that benefit his team. I can only assume he is talking about Crosby taking that dumb boarding penalty in game seven vs. the Canadiens - he really showed his composure and leadership sitting in the box like that.

Also, how hilarious is it to see the comments on that blog make the comments at BOC seem insightful and nuanced? We've got to send Spade over there to teach them how to write coherently.

Anyway, the Sharks will come to play tonight, and they have the talent and the discipline to win. One win completely transforms this series, and the Sharks can get it in Chicago.

Prediction: The Sharks win both of the Chicago games. Tonight the Sharks win 4-2, with goals by Marleau, Boyle, Nichol, and Couture.

* = See Rudy? I told you people say that all the time.