Share All sharing options for: Sharks caught in the typical conference finals jam 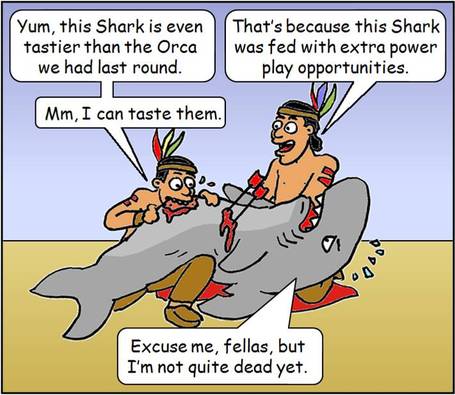 But while fate has played these Sharks into a mostly-insurmountable 3-0 hole, I suppose it's worth noting that it's not an uncommon predicament in recent conference finals.  In fact, since the lockout 60% of conference finals series have started with one team taking the first three games.

3-0 Conference Finals Leads since the Lockout:

This is not the same thing as building a 3-0 lead in an opening round series against a playoff pretender; all the teams in this table showed that they could regularly win through two earlier rounds in that playoff year.  I'm not sure why the 3-0 conference final lead has become so common lately -- is it a result of early round upsets working their way out of the system, or is it just a case of fatigue kicking in?  Maybe it's even just a story about building momentum through two rounds -- one team is better at carrying forward its winning habits.

Going on the precedent of results in the table above, seems that the Sharks are 80% likely to pull a win in G4 and extend the series; going beyond that seems really tough.