Share All sharing options for: Sharks Gameday: The Big Sleep 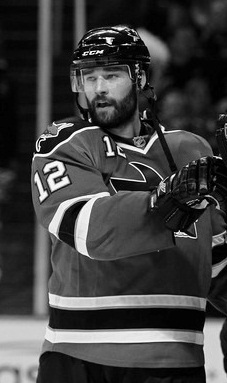 They say that Hell was a rough draft - Chicago is the final copy.

The moment my eyes opened I regretted waking up. The pain rushed through me again, not as intense as it had been the night before, but somehow made harsher and more bitter having simmered overnight. In my line of work you learn to expect this: the ache from a beating ages like cheap whiskey.

As I groaned and sat up I started to piece together what had happened Friday night. I sat on my mattress and stared at the wall, the faces of the Blackhawk Gang swimming in the sewer-water of my memory. I saw them all: that trio of punk kids, Sharp, Kane, and Johnny Toews. The silent Finn standing in the back, Mr. N. The smirking Davey B., and the massive figure they called "Buffalo Man." Their matching red jackets weren't just stylish - they also didn't show my blood when it came streaming from my nose and mouth.

I got to my feet and a few deliberate steps brought me to my kitchen. My hands made the coffee without my mind to guide them - it was still dwelling on that dark and ugly scene Friday night. As the smell of the coffee reached my nose and finally drew me back to the present I realized I was staring at my reflection in the flat steel of the toaster.

I looked rough even for me, and I'm not a guy who has ever looked smooth. They call me Patrick Marleau, P.I. Well, actually, they usually call me "Buddy" sarcastically before showing me the door or what their knuckles look like close up. It's a living - or close enough to one that it's hard to tell the difference.

I hadn't been alone against the Hawks, of course. I don't like involving others in my troubles, but I have friends that I know will be with me to the bitter end, which Friday nearly was. Little Joey had been there, and Dany Heat, and the Mad Irishman Boyle. They backed me, and we gave nearly as good as we got...for a while.

About a month back the people of San Jose had contacted me, hiring me to get this Cup they claimed was rightfully theirs. The case had a rough start, nothing but dead-ends and black eyes at first. But then I hit my stride, and things started falling into place. I had been so close...I still was close, even bruised and bloodied. But these damned Blackhawk punks were in the way.

This wasn't a job any longer - this was personal. This was about standing up for my reputation, and, yeah, I can admit, about my damn fool pride.

I needed a drink, I needed a lot of life insurance, I needed a vacation, I needed a home in the country. What I had was my jersey, helmet, and stick. I got ready and went out the door.

By the time I neared the United Center the sun was high in the sky, as if it wanted a front-row seat for what was about to happen. I saw the Hawks hanging out around the back entrance, looking as mean and ugly as ever. I stiffened my walk to hide my limp.

I wasn't done yet, but all room for error was gone. No more mistakes - I needed to be perfect.

I stood in front of the red-clad gang until they all noticed me. I nodded my head at them in greeting.

"Buzz off, Shamus," Kane said with a sneer, cleaning his nails with a pocketknife.

"Yeah, well if it's the same question as Friday you can forget it," Davey B said, puffing out his chest, "We don't know nothing about any Cup, see? So get lost."

Though none of the boys looked as bad as me, I could tell they were nursing bruises themselves. We had come close to beating them Friday night, after all, before things went bad. The Hawks had come out on top, but it had been by a slim margin.

"You know you can't win," Mr. N said, his voice soft and emotionless, "You can't beat us, Mr. Marleau. You need to face reality."

I gave him a half-smile. "It's reality that should get ready to face me."

My muscles were tense and tired, but they were ready to give it everything they had. Win or lose, nobody would be able to say I hadn't given it my all.