Check out my Junk

Share All sharing options for: Check out my Junk

In today's post I take a look at the random Sharks merchandise and junk I have around my room or that I found while cleaning out my closet. 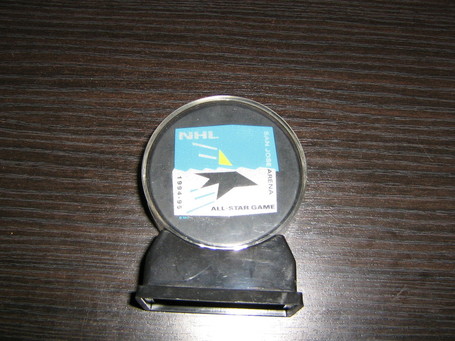 This is a puck commemorating the 94-95 All Star Game that was held in the San Jose Arena. This is the game where Owen Nolan, greatest man alive, scored his called-shot goal on Domink Hasek. Awesome.

Rudy gave me this puck as a present after he visited the Hockey Hall of Fame on a road trip. It's an awesome gift, and totally makes up for not taking me with him. Oh wait, no it doesn't - not even close. 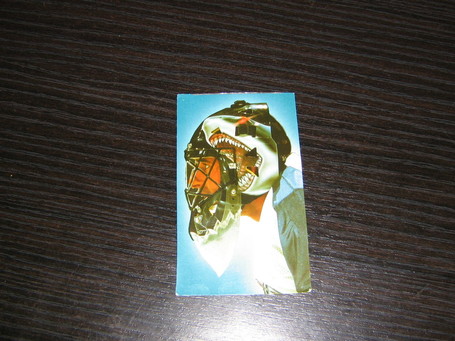 This is a magnet featuring Sharks goalie Steve Shields. It was part of a larger schedule-magnet thing that we had at home one of the seasons when my dad and I had season tickets for the Sharks. Following the season my dad cut this part of the magnet off to keep, and it's awesome. I had it up at work during the season but now it hurts too much to look at it, so I've taken it down until the Fall.

We had season tickets from 1999-2001, so I have a bunch of trading cards that I think they gave out those years at certain games. The first batch is some line of cards called "Victory." Check them out: 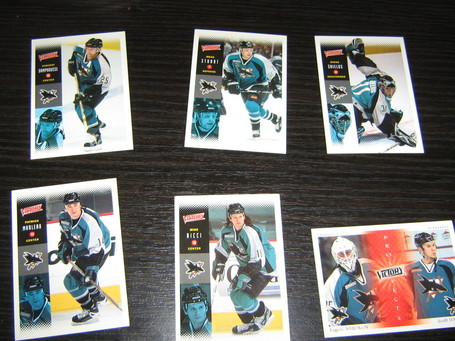 If you can't tell, the players are Vincent Damphousse, Brad Stuart, Steve Shields, Patrick Marleau, Mike Ricci, and a Prospects card with White-Mask Nabokov and Zoolander-Looking Scott Hannan. Let's take a closer look at that last one, shall we? 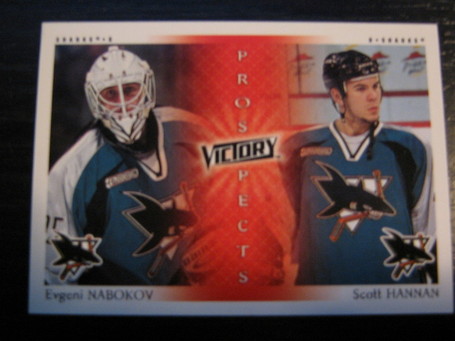 Hahaha look at Scott Hannan's face! Also of note is what is says about Evgeni Nabokov on the back of the card:

"Nabokov played well for the Sharks in his brief time between the pipes.His 2.17 goals against average shows that he is more than ready for more NHL work.

Impressive, no? This Nabokov kid sounds like he might be something special, but he's no Steve Shields.

Here's the next batch: 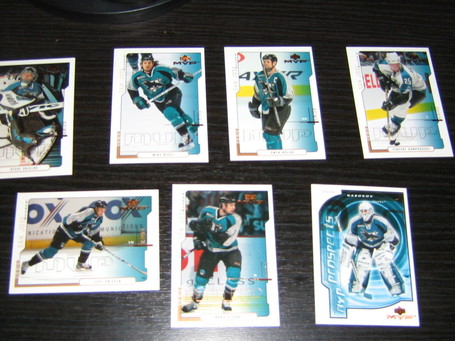 There's some great stuff on the backs of these cards.

Jeff Friesen: "A tremendous all-around talent, Friesen is becoming one of the top players in the Western Conference. He is lightning-quick and has great cut-back ability too, making him especially tough to stop in open ice situations. With Friesen's wealth of offensive talent, a 40-goal, 80-point season is definitely within his reach."

Brad Stuart: "Stuart has excellent speed and may soon develop into one of the top offensive forces in the league from the blueline"

Steve Shields: "Now squarely the No. 1 goaltender in San Jose, Shields will be looked to time and again this season."

That one is actually kind of sad, in retrospect. Shields hurt his ankle in the second game of 00-01 and never got the starting job back. 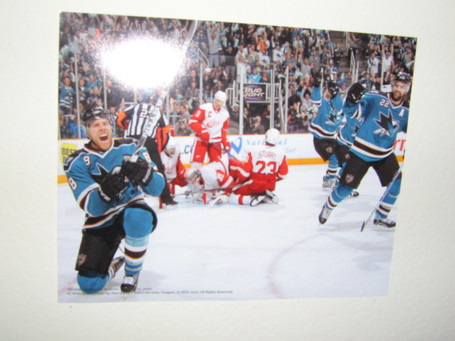 I just got this two weeks ago and it's great. The pure joy on Pavelski's face, the celebrating crowd, and the despair of the Red Wings right in the middle...it's the perfect picture. I would highly recommend the NHL photo store to all hockey fans, brought to you by Carl's Jr.

They used to sell these 8 1/2 by 11 glossy pictures of players at the stores throughout the Sharks arena. I think they were like 10 bucks. I bought Nabokov, Marchment, and Nolan, now sadly lost.

And no, I don't know why I got the Marchment one. Poor Bryan doesn't get to be on display - I had to dig through some old papers of mine to find him.

This is a Sharks model big-rig truck from 2000. Its awesomeness is only rivaled by its randomness. I'm sure whoever thought up the Sharks Truck went on to develop other great ideas like the Atlanta Thrashers Mini-Disk player and the Dallas Stars Contact Lens Case.

Well that's all for now. I hope you enjoyed this tour through some of the random Sharks-branded crap I've collected over the years. I encourage all of you to post pictures of your own junk in the comments.