Share All sharing options for: How Not to Play a 2-on-1

Prof. Kelly: Good morning, class.  Today we are going to discuss 2-on-1's; specifically, how not to play them.  Our real-world example will be from last night's San Jose-Detroit game.  If you'll recall from your homework last night, the Sharks won the game 4-3 in overtime on a 2-on-1 between Joe Thornton and Patrick Marleau.  Let's examine this play to see what the Detroit Red Wings did wrong.  First slide: 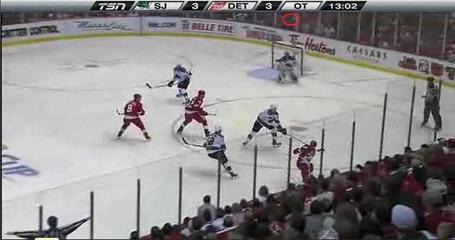 Prof. Kelly: 2-on-1's sometimes occur through luck, folks.  More often, though, they occur through stupidity.  Here you'll see the play that leads to the 2-on-1.  The Sharks had made an ill-timed change, leading to a quick break for the Detroit Red Wings.  The Wing center flipped the puck to Jason Williams on the right wing and then drove to the net, as he's supposed to.  You can't see him but there is a 4th Red Wing just out of frame on the left looking for a rebound.  Ideally, Jason Williams would put the puck at Evgeni Nabokov's right pad, creating a rebound.  Instead, Williams put the puck just underneath the "OT" marker, in a spot I have indicated with a circle.  This caused the puck to careen wildly out of the zone, leaving no possible rebound opportunity and putting the Wings out of position.  This created a 2-on-1.  Jason Williams, you are the 2nd worst person in the world.

Dylan: But Professor Kelly, couldn't he have been trying to score and just shot it wrong?

Prof. Kelly: What are you, retarded?  Shut the fuck up.  Next slide. 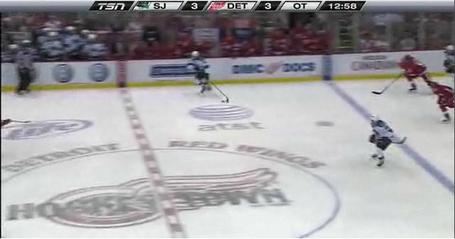 Prof. Kelly: Here you can see the result of Jason Williams' screw-up; the Sharks now have a 2-on-1.  The person with the puck is Joe Thornton, who had just stepped onto the ice.  Thornton leads the league in assists since the lockout.  The person to the bottom is Patrick Marleau, 40-goal scorer this season.  Now class, if you're an NHL defenseman who knows these two players, how do you think they're going to play the 2-on-1?

Jason: Uh, Thornton's going to pass it to Marleau, who is going to shoot?

Prof. Kelly: Right, Jason, you're as smart as you are supple.

Prof. Kelly: -So we have a pretty good idea of what's going to happen.  Remember that when we move ahead.  Next slide. 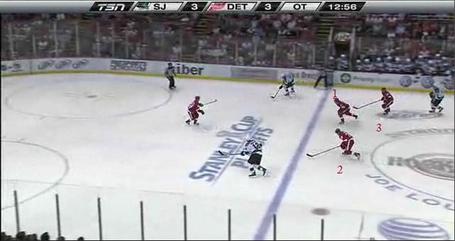 Prof. Kelly: Alright, so let's go over the basics.  How should the defenseman, Brian Rafalski, play a 2-on-1?

Wang: The defenseman should play the pass and give the goaltender the shot, I believe.

Prof. Kelly: Settle down, Wang, you're gonna blow a circuit.  Alright, class, what is Rafalski doing with his stick?

Roberta: He's telling the trailer to go after Thornton.

Prof. Kelly: Right.  The trailer, signified as Player 1, is skating as hard as he can to get back and can't really evaluate the play, so the defenseman already back has to direct him.  What should Player 2 do?

Jason: He should skate after Marleau in case there's a rebound.

Jason: Professor, are you making kissy faces at me?

Prof. Kelly: And what should Player 3 do?

Dylan: He should hold back and cover the trailer. 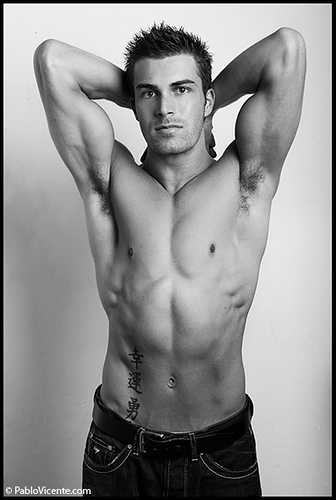 Prof. Kelly: Whoops, how did that get in there.  Haha!  Moving on: 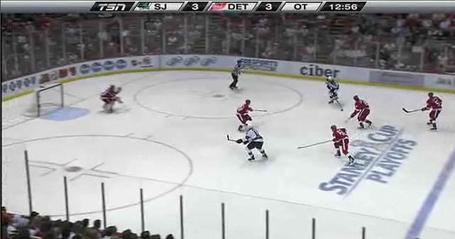 Prof. Kelly: Alright, we've moved ahead a little bit.  As you can see, the 3 trailing players have all done their jobs.  Rafalski is in position to cover the pass and Howard has come out to face the shooter.  The problem, though, is that Rafalski has his stick out of position.  For whatever reason he's still pointing out Thornton to his trailer.  I have no idea why.  Thornton is holding the puck and looking for a lane.  If we view the next slide... 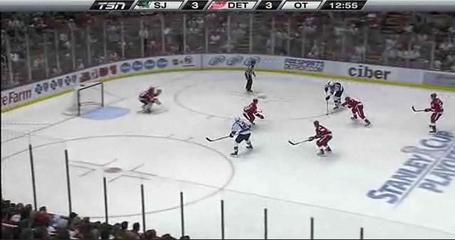 Prof. Kelly: ...We can see that Thornton has found that lane.  Rafalski is too deep and has his stick to the wrong side, leaving Marleau wide open for a skilled passer like Thornton.  Rafalski was in position to cover his man but he didn't actually cover his man.  Brian Rafalski, you are the worst person in the world.

Pete: But Professor, can't you place some of the blame on Jimmy Howard for selling out to the shooter?

Prof. Kelly: (Sigh) No, Pete, because Rafalski had the passer all the way until the end.  Howard needs to trust his defenders in that situation and trust that their going to give him the shot.  Do you try to come up with the dumbest fucking question possible or what? 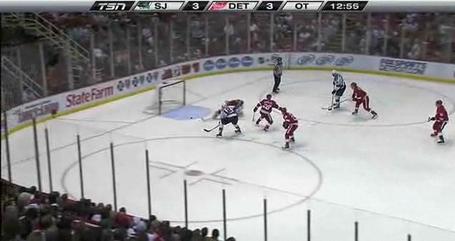 Prof. Kelly: Here you can see Patrick Marleau scoring one of the easiest goals of his life.  Rafalski was turned inside out by the pass and Howard did not expect the puck to get through.  Marleau is left with the easy score.

Dylan: He wasn't the only one who scored last night!

Prof. Kelly: Get out.

Dylan: What?  Professor, I was just kiddi-

Prof. Kelly: Get the fuck out.

Dylan: You can't talk to me that way, I'm going to the dean about this!

Prof. Kelly: I have tenure, you little shit!  I'm untouchable!