I love it when a plan comes together!

Share All sharing options for: I love it when a plan comes together!

Rudy may see June 11 as the date when some kick-the-ball tournament starts somewhere distant on the globe, but this date's been on my calendar for a completely different reason.  The A-Team is coming, the A-Team is coming! 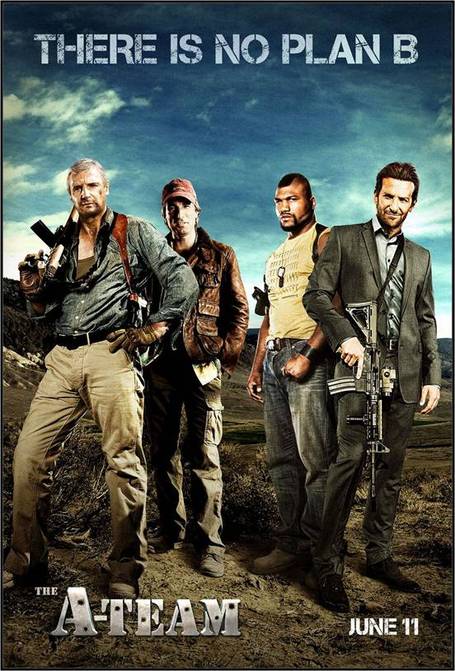 Now I've already watched Hollywood over-butcher other childhood staples such as G.I.Joe and the Transformers, so I am prepared for this movie to frequently piss me off tonight, but still I can't help being excited.  This show is a completely different beast for me, thanks to a post-college KDOC renaissance and the fairly recent DVD releases; I'm still quite versed and actively watching A-Team reruns.  In fact I'm typing this with an episode playing right now -- awesomely distracting.

Sure, the A-Team is nothing but an escapist formula show, but I think it's the greatest formula show ever made.  A-Team gets humorously hired to deal with a bully, has a first run-in that goes somewhat awry, learns about some deeper scheme at work, gets captured and locked in a warehouse or barn, they weld something silly together to boil everything down to a fistfight, and escape just in time as the military arrives.  Cars get flipped and exploded, Murdock finds a new way to piss B.A. off, Faceman pulls an overly awkward con, nobody gets shot, and Hannibal pulls off a shitty disguise to light a cigar -- it's perfection every time.

Now I already know (or sense) that a lot of this will be modernized -- people will get shot, B.A. won't wear a ridiculous amount of gold, and the A-Team will probably not weld anything together that doesn't involve some modern electronics aspect to it.  They'll follow some of the show's patterns -- escaping from a maximum-security prison -- but rather than starting it with a shammy conversation with a prison guard it'll involve some high-tech grappling hook out of Batman's arsenal.  They'll blow plenty of shit up, but those scenes will be much more digitally constructed, I suspect, than is really necessary.  Whatever, I guess -- hopefully the spirit of the show manages to shine through that.

In some ways, the movie cannot win for me -- my checklist is too long and I'm way too close with the old show.  I'll be pissed off, for instance, if they don't dress Hannibal up as a comical Mr. Lee at an early point in the movie -- that was a show staple.  And even if they do attempt it, I'll be pissed off that it isn't George Peppard offering bad-accented fortune cookie slogans with cotton balls in his mouth.  Damned if they do, damned if they don't.

In another way, though, the movie cannot fully fail -- as soon as B.A. gets angry at Murdock, I'll be grinning like a stupid idiot.  I'll cheer every time the van comes crashing through an obstacle, and I'll laugh whenever Faceman whines about anything.  Yeah, this movie is going to suck, but at least I'll have some nostalgic fun -- bring it on, Hollywood.