Ladies and gentlemen, I would like to thank you for attending today's press conference.  In the interest of time, I would ask that all follow-up questions be saved until after the press statement has been completely read.  I won't delay with introductions, as we are in the midst of a global pollution crisis -- the following is a prepared statement by the NHL Petroleum Company. 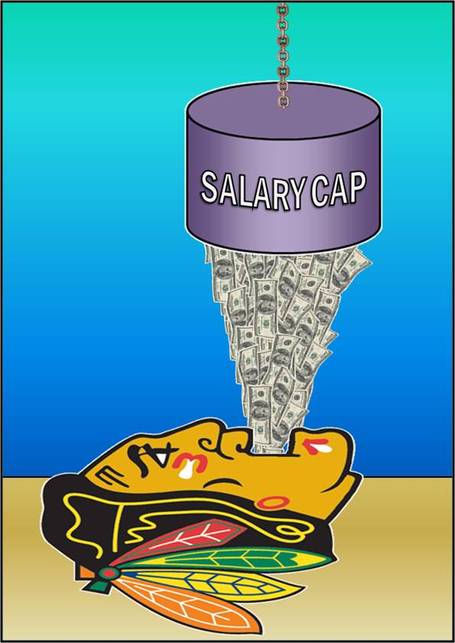 We are on the cusp of a global catastrophe, as reckless mining for salary cap loopholes has created a spending leak that we at the moment cannot contain.  The Chicago Blackhawks megacontract spill in the Gulf of the Central Division has been polluting the free agent trending waters for weeks now, but rest assured that the NHL Petroleum Company will not rest until this costly leak has been sealed.  The magnitude of the dollar-spewing is difficult to quantify at this point, as pretty much all of our efforts have been devoted to stemming the leak.

To the right you can see a diagram of the containment efforts; a salary cap dome has been lowered to try to capture and redistribute a lot of those committed dollars.  But there have been setbacks along the way; our first attempt went awry when it was discovered that the cap had been pre-filled with some of last season's bonus dollars.  Also, some of the committed dollars are escaping through a circumventing process known as AHL demotion.

At this point, the cap dome is mostly lowered over the leak, but it hasn't been secured into place just yet.  There is an NHLPA pressure point that we've located that can raise the cap ceiling by $2M for next season, which would limit our ability to capture all the dollar leakage.  If that is avoided, however, we believe it is still possible that we could achieve a lowered-ceiling hard seal -- that would really stick it to the Blackhawk.

We remain positive that a solution is imminent so we can preserve the ecological balance of UFA pricing, and going forward we hope to stem the hasty pollution caused by short-sighted GMs.  Already hockey congress is moving to enact a bill that will limit contract spans; hopefully that allows for less risky contract mining in the future.

For now, the NHL Petroleum Company is recommending short-term alternative sources of roster-filling, as player prices may fluctuate wildly in the next few months.  We sincerely look forward to moving past this particular contract-overcommitment crisis so that we can continue our services uninterrupted by future lockout.