The BoC Race to Twelve

Share All sharing options for: The BoC Race to Twelve

Kudos to commenter brokenyard for bringing this up a few days ago:

Here’s an interesting fact that I’m pretty sure is correct:

All 3 BoC teams currently have 11 playoff-series victories each.

Well, what do you know?  It's a dead heat!  Here's the listing of successful playoff series each BoC team has emerged victorious in over each franchise's lifespan:

The table represents 33 seasons ended by a BoC team.   Calgary has been eliminated by a BoC
opponent 7 times, Detroit 5 times, and both Vancouver and Colorado make the list 3 times apiece.

Now several of you Ducks and Sharks fans will be quick to note that the Kings had a 10 series-victory lead before either other franchise entered the picture, and for sure, there is that "Two Tortoises and the Hare" aspect to this storyline.  But we mustn't raise too big a stink about that catch-up, even if it does make for an easy punchline -- it's largely because of L.A.'s popularity-driving success (particularly in the early 1990s) that either other franchise ever made it on the hockey map.

And besides, who gives a damn really how we got to this point?  We're a forward-thinking blog.  For whatever reasons, we're all tied up in this arbitrary measure of franchise success now, and that's exciting. 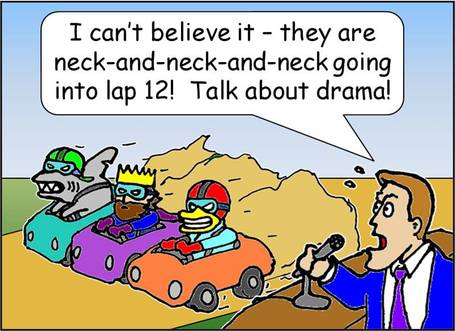 Now certainly, there is still a full summer and season ahead of us before we start ramping up for somebody's series victory #12.  It seems somewhat assured that one BoC team will get there, though; a BoC team has advanced past round one every season since 2000.