The polls are closed, and with over fifty voters choosing up to five teams to list as their favorites and five more to list as their least favorites, we have our results. The Excel graphs (Can you taste the blogging excitement?) can be found after the jump below.

Polling process: The results were weighted based on positioning - the teams mentioned first for like or dislike each got three points, then two points for second and one point for each of the others that were listed.

BoC teams: The purpose of this poll wasn't really to have a competition between fans of the BoC teams and see who could get the most votes, so it doesn't really matter to me which order the Sharks, Kings, and Ducks were in for Most Liked. I was more interested in 1) The other teams that our readers enjoy and 2) Which teams were the most disliked. In these regards, we got some awesome data - thanks to everyone who voted, except for that one guy who liked Dallas the most.

Sharks: San Jose gets a lot of love, but also a fair amount of dislike. I did notice that the Sharks were very rarely anyone's second-through-fifth favorite team. It seemed that our readers were, for the most part, either Sharks fans or disliked the Sharks.

Kings: The Kings didn't inspire a lot of votes either way - they definitely don't garner the same hate as the Ducks did in the BoC. I know that for myself, as a Sharks fan, there isn't much to dislike about the Kings - in fact they're one of my other favorite teams. You can do it, little guys!

Ducks: The Ducks get a lot of hatred, and it really isn't that difficult to figure out why. First, winning the Cup before either of your older brother California teams was really rude, guys. For shame. Not cool. Second, employing guys like Chris Pronger and Corey Perry isn't going to win you many friends. And finally, I know I've personally never forgiven the team for dropping the Mighty.

Most shocking discovery: I was blown away that there isn't more hate for the Avalanche out there. They only got 6 hate points.

Tastes like taint: I mentioned this survey on the SBNation Sharks blog Fear the Fin, which probably helped inflate the Sharks' numbers a bit. I did check the voters to make sure they had joined BoC before June 1st, however, before I counted their votes. The results we have should be fairly representative of typical BoC readers, meaning drunk and belligerent.

Teams nobody likes: Every NHL team got at least one vote from our readers as one of their most-liked. The teams with the fewest positive mentions were the Flames and the Senators.

Popular teams: After the obvious choices this list of most-liked gets a lot more interesting. Lots of people apparently share my love for the Sabres (Mr. Charisma Ryan Miller probably has a lot to do with that). The Coyotes got a ton of positivity from our readers, somewhat surprising for a Pacific rival - the trend here was for Ducks fans to pick the Coyotes second or third because of Bryzgalov, which is a pretty good reason. There was also a fair amount of support for the Flyers, and most people gave reasons aside from "they need to beat the Blackhawks" so this is probably legitimate rather than temporary. 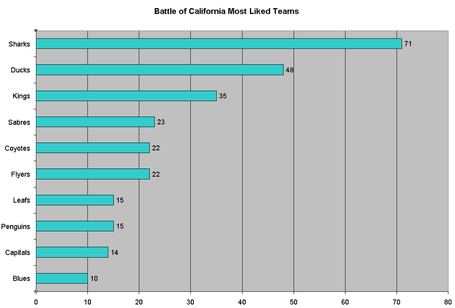 Teams nobody hates: Thrashers, Blue Jackets, Lightning, and Maple Leafs all had no specific mentions for dislike. Rudy and a couple other people did mention disliking Canadian teams in general, though.

Hated teams: The Red Wings ran away with this one, with 9 out of 10 voters mentioning them as a hated team, and almost everybody picking them as their number 1. I was happy to see the Stars get some scorn too, even though they suck now. The Penguins are strongly disliked, though it would be interesting to see what the numbers would be like without Crosby on the team. And how many people would have mentioned the Blackhawks if it wasn't for this post-season? 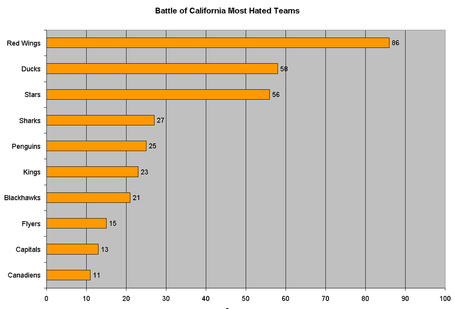 This was a lot of fun and a tremendous waste of time. Once again, thanks to everyone* for participating - it was really interesting to see what other teams people support and what everyone's reasons were. If you haven't yet, do yourself a favor and read through the lists in the comments of the last post - there's some hillarious and fascinating stuff going on there.

* = except, of course, for the guy who picked the Stars as his favorite team.