Share All sharing options for: Wiki-Sharks vol. 4: Weekend at Bernie's 2

How many more of these Wiki-Sharks things do I have left? Hopefully I can burn through a bunch of the less interesting players today. Let's get started!

No picture for Derek Joslin and not much interesting on his Wikipedia. Hoo-boy, we're not off to a strong start here. Anything at all of note about you, Mr. Joslin?

That's a pretty kick-ass list, and it has way more people on it than Ryane Clowe's Newfoundland and Labrador thing. Looking through the list though, I see that somebody has spent a lot of time marking the different players as either "Bi-racial" or "Multi-racial." I can't decide if pointing this out is racist or if it's more racist to try and put people on a list of Black players when "race" is such a nebulous concept that's impossible to really define. Either way, I'm fairly certain there's some hard-core racism going on somewhere. I, for one, am terribly offended.

Also, "Afro-Canadian" is the name of my new band, and we're going on tour this Summer. Check us out!

Final question - Olaf Kolzig was born in South Africa, has German citizenship, but grew up in Canada. Is he an Afro-Canadian? An Afro-German? Or an Afro-Germo-Canadian?

Did you mean: Henrik Larsson

The first recording in a real studio, Opus 1. Sixteen channels. Recorded and mixed by Henrik Karlsson who also owned the studio.

Wow, I had no idea! Okay, so before getting into hockey Henrik Karlson was a music producer in the late-80s early-90s. Wikipedia is so full of interesting information! I wonder what Henrik did prior to starting his music career?

The Archbishop of Uppsala (spelled Upsala until early 20th century) has been the primate in Sweden in an unbroken succession since 1164, first during the Catholic era, and from the 1530s and onward under the Lutheran church.

Was also friends with Saint Birgitta, in Rome and took part in the important political decisions during his years as archbishop, such as the Kalmar Union in 1397.

Had a good economical skill, was a wealthy man, and acquired many farms for the Church. At his death, he left them to the cathedral chapter, but Queen Margaret is said to have taken them in possession instead, which marked the beginning of disputes between the chapter and the states in the union (which lasted until 1520).[15]

Oh shit, he was the Archbishop of Sweden? Damn, this guy has had a wild life. Good work on getting those farms, Henrik.

Okay so somebody needs to update Henrik Karlsson's Wikipedia to say "NHL player for the San Jose Sharks, music producer, and Archbishop of Uppsala from 1383-1408."

Strike three as far as pictures go today. We're in a really rough part of the alphabet for Sharks players I guess.

Okay so he's American and he's 30 and he doesn't have a picture on his Wikipedia. What kind of NHL career has he had?

On November 6, 2009, Leach was claimed by the Montreal Canadiens on re-entry waivers from the Devils. On December 1st, he was claimed by the San Jose Sharks on waivers. Leach recorded his first NHL goal in an 8 to 5 victory over the visiting Nashville Predators on March 11, 2010.

On November 28, 2009, due to a high number of injuries to Canadiens forwards, Leach played forward instead of his usual defense position.[1]

Leach was claimed off waivers by the San Jose Sharks on December 1, 2009

Here we see a problem with the Wikipedia format. This is clearly sloppily written, as it mentions him being picked up by the Sharks off waivers two times. Who is the genius that added that last line without bothering to read the rest of the damned article and see that it was already there? Now it looks all shitty and nobody will ever fix it because nobody ever looks at Jay Leach's Wikipedia page. I blame Judson Couture for this travesty.

I don't know who that is, but I do know that if you go to her Wikipedia page, it says:

Whoever wrote that should buy a pregnancy test, because they missed a period.

Anyways, I have a sneaking suspicion that these little notes were added to their Wikipedia pages either 1) by Kathryn Tappen in a digustingly cutesy attempt at romance that Jay Leach couldn't care less about or 2) by some random friend of the couple as the worst wedding present ever.

Any interesting category lists down at the bottom for Jay Leach? 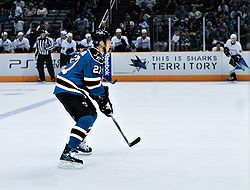 Caleb Malhotra is a fucking awesome name. That kid is going to be an indestructible sports-beast.

On October 8, 2004, during the 2004–05 NHL lockout, Malhotra signed a contract with HDD Olimpija Ljubljana, the most successful team from Slovenia[citation needed]

Take a little mental journey with me: picture the dude sitting at home on his computer who decides to look up Manny Malhotra's Wikipedia. He's happily reading through it when, suddenly, he gasps in horror. At first he can't believe his eyes, but slowly he is forced to face the terrible truth - somebody claimed that HDD Olimpija Ljubljana was the most successful team from Slovenia WITHOUT BOTHERING TO CITE THEIR SOURCE FOR THIS INFORMATION. Jesus, man, what is happening to the world? This is worse than rape.

The guy who added the [citation needed] here is a Wikipedia user named Slotrooper. If you actually join Wikipedia as an official user, you can hide your IP address, so I can't use Internet Stalking to find out where this guy lives...but I CAN look at the history of his contributions and take a pretty good guess.

Slotrooper has gone crazy editing the page for a Slovenian ice hockey team as well as adding Slovenian goaltenders to Wikipedia and having a fit over the site's policy to not include "diacritics" in player names. "Diacritics" are apparently those little accent marks over letters that indicate they have a funny, foreign pronunciation. Slotrooper made some changes to the Kings' page at some point to add diacritics to player names, but his changes were quickly undone. I know this is probably an issue of arrogance and ethnocentrism or whatever but this Slovenian Slotrooper and his stupid diacritics can suck my díçk.

Can you imagine what this man must be like? Spending hours on Wikipedia, obsessing over the tiniest little details, writing paragraph after paragraph about things nobody else in the world gives a shit about? What a sad, pathetic existence. How can a man like that live with himself?

*looks in the mirror*

What will become of Megalodon? Tune in next time for another exciting episode of Wiki-Sharks!