Last time our most famous Wiki-Shark was Manny Malhotra. I wonder if we'll have any better luck this time? 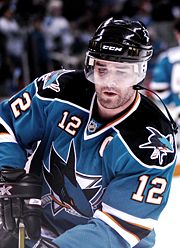 I assume this is another Ivan picture...what was the thinking behind the black-eye here? It might be time for a new pic - something without the "C" and with more of a playoff beard, maybe? Somebody make it happen.

Patrick grew up on his family farm near Aneroid, Saskatchewan. There is no hospital in Aneroid so he was born in nearby Swift Current, Saskatchewan.

God I love Wikipedia so much. This is awesome. Here we see evidence of countless furious Internet arguments about Marleau's birthplace, complete with the most aggressive citations ever. The first line was probably added as an attempt at compromise and explanation later on, and it makes the second part with the citations completely unnecessary, but it's still there for some reason. If there's no hospital in Aneroid so his parents went to Swift Current to have their baby, then HIS BIRTHPLACE IS CLEARLY SWIFT CURRENT. DISCUSSION OVER. STOP DEBATING THIS. WHAT IS WRONG WITH YOU PEOPLE?

Welcome to the Internet: the land where arguments never die. I'm sure there's somebody on some crazy message board somewhere who is still arguing in favor of the "four humours" theory of health. "You say you've got a headache? TOO MUCH BLOOD IN YOU - YOU NEED LEECHES."[1][2][3][4]

(I'd like to take this opportunity to promote my new book: Megalodon's Guide to Internet Comedy: Caps Lock Makes Everything Funnier!)

In his rookie campaign in 1995–96, Marleau exploded

Holy cow! Damn, I had no idea. How did he ever recover from such a devastating -

onto the scene in Seattle tallying 32 goals and 74 points,

leading his team to a playoff loss

Aw, what a depressing bit of foreshadowing. Has poor Patrick never had playoff success?

Kamloops? What the hell?

During the 1996–97 season, Marleau was named captain of the Thunderbirds

Well, the leader of the Thunderbirds looks like this: 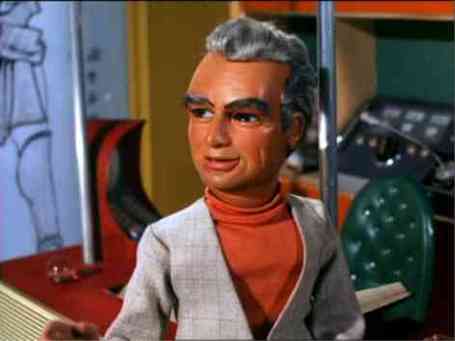 But I think Marleau looks more like Captain Scarlet:

In the playoffs, Marleau led the Thunderbirds to the club's first and, thus far, only Western Conference Championship

before the team bowed out in the WHL Finals to the eventual Memorial Cup champion Lethbridge Hurricanes in four games.

50 bucks says this edit was made by Drew Remenda.

When coach Ron Wilson initially rotated the captaincy to Marleau, previous captain Alyn McCauley advised him to leave it with Marleau.[citation needed]

Marleau was voted one of three finalists for the Lady Byng Trophy, awarded to the most gentlemanly player, but lost out to Pavel Datsyuk of the Detroit Red Wings.

When reached for comment about how he felt to lose out on the award for the most gentlemanly player, Marleau responded that Datsyuk is a "huge pussy" and "total fag-mo-tron." He then spit in the reporter's face and flipped off some orphans.

In the summer of 2009, Marleau was stripped of his captaincy

On December 30, 2009, Marleau was selected to play for Team Canada at the 2010 Winter Olympics in Vancouver at which he won a gold medal.

What shitty sentence construction. This is what happens when somebody makes a lazy edit to a pre-existing sentence and tries to cram another idea into it. Reading that sentence is like getting punched in the balls by a time machine.

You can be lazy and still do a decent job editing Wikipedia. Case in point, my edit of Corey Perry's featured here in the comments of my curse-breaking post. I didn't give enough of a shit to bother linking or citing anything, but I still wrote a coherent sentence that didn't give readers temporal whiplash.

Fuck, that sentence makes me angry.

Anyways, that was an awesome Wikipedia. Lots of detail and history and fun stuff to read - I sure hope whoever is next on our list can live up to this high standard!

John McCarthy (born August 9, 1986 in Boston, Massachusetts) is an American professional ice hockey left winger who currently who plays for the Worcester Sharks in the American Hockey League.

What the hell? That's it? THAT'S THE WHOLE THING? 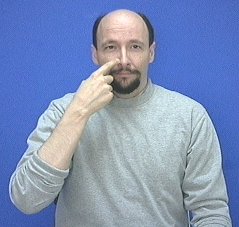 (At the risk of traveling further away from hockey on a tangent than ever before dreamed possible...this dude from the American Sign Language website looks an AWFUL lot like this dude, the head of the Church of Satan. 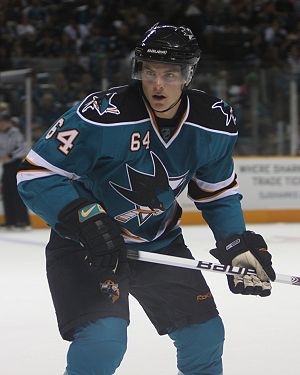 YES THAT'S AWESOME. God damn, forget what I said about Caleb Malhotra last week - this name rocks. I'm totally going to name my kid "something something the fourth."

I disagree! Without citations to back up your argument, this is open to debate. While 06-07 may have been his most productive season statistically, it does not follow that it was necessarily his "best" season, objectively judged. First, one must define the word "best," which is a very difficult-

In the 2006 NHL Entry Draft, McGinn was drafted in the second round, 36th overall, by the San Jose Sharks.

After his 2006–07 OHL season, McGinn was signed to an entry-level deal by the Sharks.

Fine. Be that way. Jerk.

This biographical article relating to a Canadian ice hockey centre is a stub. You can help Wikipedia by expanding it.

I hope you'll continue reading this series of articles, because I think I may have stumbled upon something huge. American Sign Language = ASL = American Satanic League? How could we all have been so blind?