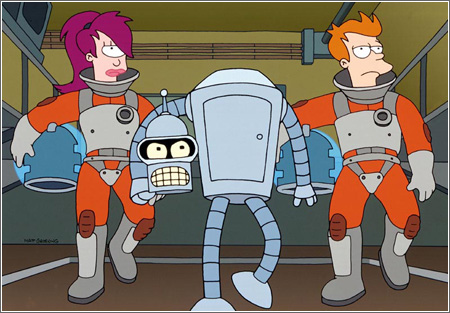 Good news, everyone! The best show ever comes back tonight!

Futurama is better than The Simpsons because Futurama is distilled and concentrated awesome; while The Simpsons took a few seasons to hit its stride and then gradually declined in quality, Futurama started strong and has only gotten better. While The Simpsons struggled after years of greatness because of the limited number of story-lines that a family-based sitcom can explore, Futurama has countless stories left to tell, ranging from traditional sitcom plots to wild sci-fi adventures.

Futurama is better than South Park because it isn't bound to topical issues -science fiction has a much wider audience and more lasting appeal. Just as people can still enjoy Jules Verne or H.G. Wells today, Futurama will be appreciated for decades to come.

Futurama is better than Family Guy because it doesn't suck.

Okay, okay, more than that - Futurama is a great show because it has characters with consistent personalities and a reality that, while wacky, is believable. Family Guy can have really funny jokes, but Futurama has hilarious stories and characters. And Futurama's plot was planned out years in advance, much more successfully than Lost or even Battlestar Galactica. It's true.

You may be confused if you've never seen an episode before tuning in tonight - the show isn't exactly forgiving for late-joiners, I guess. Whatever - watch tonight and then get the DVDs and get caught up. It's awesome!

WATCH THE SHOW - that's not a request.