Share All sharing options for: BoC and Roster Spending

Hey gang, sorry for the absence but I've been fighting the stuffy head demon a few days now.  As such, you should probably not treat anything presented in this post as "fact" -- especially when we're talking salary calculations it's a tricky gig.

For instance, here's a chart I put together of historical roster spending for the Ducks, Kings, and Sharks, but I do want to re-emphasize: there are tons of errors here.  I pulled from a mixed bag of sources and I promise that I did not spend more than an hour in creating it, so really it's only good for broad observations.  In the postlockout portion of the graph I've intended to capture "cash" spending (rather than "cap" spending), for what it's worth -- still I expect it's only vaguely correct. 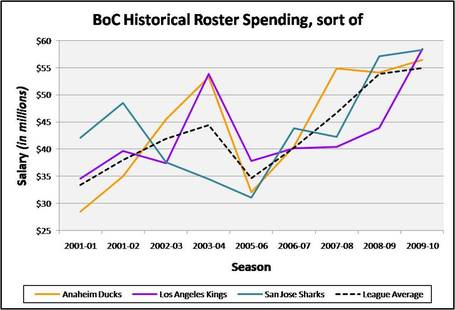 WARNING: This chart is best examined from across the room.

All three teams over the past decade have spent some seasons as above-average spenders, balanced against years of relative frugality.  You can see the league's salary rollback effect in 2005-06 (thanks, you crazy lockout!), and the immediate re-ascent of salaries since.  My numbers may be shaky, but it looks as if all three BoC teams each spent more in 2009-10 than ever before.

Now I'm not really sure if that's true -- there is also some CBA mechanism that overrides the last five seasons which says that salaries are "fixed" to league revenues.  That is to say, that if 30 teams collectively commit to more salary than the revenue percentage allows, then each player would receive only a portion of their negotiated salary; some of it gets redistributed back to the teams through an escrow account.  It's a safety valve built into the CBA (a document I'm entirely too lazy to read, so please fact-correct me whenever you can today), but I'm not sure that it really protects BoC teams -- per my loose understanding, any excess in the escrow account goes only to revenue-sharing-eligible teams.  BoC teams may still be spending full contract value on players, regardless of league overspending habits.

So basically, it's tough to guess what the BoC teams are spending next year -- it's possible we see a decline from at least one of the teams.  Regardless, I've got summer-starting salary charts after the jump, courtesy of CapGeek.

These tables show who is signed for next year and for how much/how long; let me know if I've neglected anybody important and I can update.  I've included cap hit, cash salary, potential bonus amount, and years remaining, though the bonus column is pretty much only important in the case of Drew Doughty.

The Ducks seem relatively set to spend money, but there's way more depth players inked here than difference-makers; Anaheim may have to deal away some excess bottom-sixers this summer.  A lot of salary will immediately go to Ryan and Wisniewski, and just like every summer, we'll have to wait and see on what Niedermayer and Selanne want to do (and for how much), and now Saku Koivu, as well.

Regardless, it seems that whatever dollars the Ducks do have should be spent on top-six forwards and top-four defensemen; they've got the bottom end pretty well filled out.  Even so, will the Ducks essentially be putting all their offseason money into re-creating last year's team, and if so, can it yield better results?

The Kings come in at a surprisingly high price tag, but $2.6M of that is hidden in unclear bonus clauses in Drew Doughty's contract -- if the Kings do intend on spending to the cap, that will hinder them at the start of the year, at least.   But maybe it brings into question how loudly Kings fans beat the "Drew Doughty for Norris" drum this coming year -- that could tangibly cost the team, I'd guess.

Still, compared to the Ducks, the Kings have a much more complete team -- way more top-six forwards and top-four defensemen under contract than Anaheim currently has.  I really neglected to put Jonathan Bernier up there -- he probably is playing in net over Ersberg, I'd guess, but the dollar difference is minimal.  Bernier's got one more year until he's an RFA.

How much do the Kings intend on spending next year?  Could they lure a top free agent to really put them over the top?

The Sharks are in a weird mess -- they've got less committed to, dollar-wise, than the Kings or Ducks, but a lot of the roster to fill out, and with so many important names in payday limbo it seems impossible to fully re-create last year's team.  There are certainly cap-cheating tricks that the Sharks could employ, but can San Jose really afford to overspend the salary cap?

What may be just as critical as the big-dollar signings are the small-dollar ones, though -- can the Sharks get Nichol and Malhotra inked to bargain deals again, or find similar cheap experience again this summer?

And who is going to play goalie?  If it's not Nabokov, that may prove to be the BoC story of the summer.

I think I'm too sick to make any sensible conclusions today, but at least we have a nice starting BoC overview or something.  Let's see what the summertime brings in.