Share All sharing options for: Imaginary Dilemmas: Know Your Priorities

Anyways, I wanted to pose a question to the blog that I've been asking random Ducks friends of mine -- it's purely hypothetical, but it may be an issue that arises down the road -- who knows? Maybe this serves as an early benchmark for future decision-making; it may not be completely pointless. The question is in the poll below: You are the Anaheim GM, and for whatever reason (let's say that the devil visits you in a dream, or perhaps the ghost of Hitler -- you can make that part up yourself), you are forced to trade one of Ryan Getzlaf, Corey Perry, or Bobby Ryan. You get to keep two and have to part with one -- who would you trade? 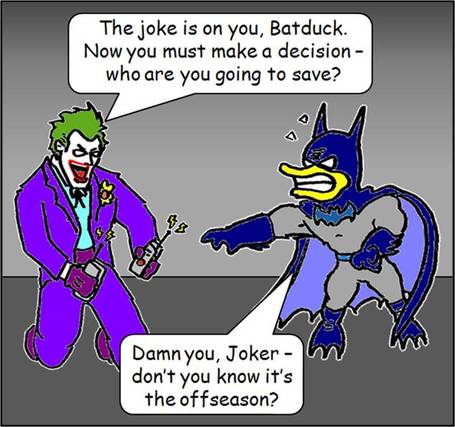 Here's last year's stat sheet for all three of them; some quick discussion after the jump:

Now normally in this sort of decision-making salary or age would be pretty big factors, but I think in this scenario, there's not too much to differentiate the three. Getzlaf and Perry are on identical-cap-hit contracts ($5.325M / yr) that both carry them through the next three seasons, and Ryan is about to make an RFA raise that will likely put him right in the same ballpark. Getzlaf and Perry are two years older and more experienced than Ryan, but that sort of balances the production so far -- Ryan's still somewhat on his developmental curve and may have more improvement ahead of him.

So I think this comes down to player preference and on-ice factors: with Getzlaf, you have an incredibly gifted passer and an angry bull of a player, but the downside is his mental makeup -- the guy will take bad penalties as long as he plays, and can be easily duped into a tough-man contest. He whines incessantly to referees and doesn't shoot nearly often enough, but the upside is pretty plain to see as well. The guy can carry a lot offensively and in the right mindset he can dominate, and he leads the trio in points-per-game by a pretty healthy margin.

Corey Perry's main asset in this debate is he's the guy I'd least like to play against. He's a constant nuisance and a pest to netminders everywhere, and he certainly is a talented scorer -- his weasel-like play on the boards and around the net are pretty unique. He's a proven winner in a lot of levels of hockey, too -- he's putting together a nifty Scott Niedermayer style resume at a pretty young age. One difficulty here is that he's played so much with Getzlaf it's sometimes difficult to separate the two; how much one contributes to the other's success is a tricky factor. Technically, Perry is cheaper than Getzlaf going forward -- cash-wise, Perry is due $15.6M over the remainder of his contract while Getzlaf is due $17M; there is a bit of spending-difference there.

Bobby Ryan is in a bit tough because he had his sophomore slump season after a really awesome rookie year. He's still a developing talent, I think, but already he's shown great talent at putting the puck in the net, even when not on the top line -- he has more goals over the past two years than any Duck. And I think he's a much more level-headed player as well, though his PIMs did climb last season. As mentioned, it's unclear where his salary and term will really land, so there's a bit of an x-factor there, but it's also a bit murky how good he ultimately might be.

And one other factor to consider here -- who would net the biggest trade return at this point? Does that matter in who you'd trade? Really, I suspect that there's no right answer -- I've certainly come up with different theories of how I'd go forward on different days I've thought it over. Feel free to cast your vote and discuss why you made that choice in the comments; even if you're not a Ducks fan feel free to participate. One last question to consider for the comments: would your decision change if Jonas Hiller was added to the mix?

And then we can sit back, take a breath, and thank the heavens that nobody really has to make this decision... yet.