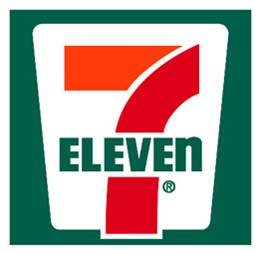 Yup, it's Sleekster's birthday today, and once again I'll just point out what a goddamn lucky birthdate I've got: 7/11/77. It rhymes, it's lucky as hell, and it's even multiplicatively sound.  Now some of you may not really believe in birthluck or green shirts or any of that garbage, but I'll offer a bit of a real-life rebuttal -- consider my "VIP" afternoon at Anaheim Ice yesterday.

Now I'd heard that the Ducks prospects camp was going on throughout last week, but I was too engrossed in video game cowboy murder and frankly didn't know enough about the Ducks' prospect pool to properly care, other than some names I heard drafted last month.  But I did have some free time yesterday before my late-night birthday dinner started, so I decided to stop by and check it out -- I threw on the lucky green shirt and headed on over.

If you've never been to Anaheim Ice, it's a basic two-rink facility with a general viewing section between the two rinks, and the Ducks prospects were set to play on the NHL rink at 6 pm.  I showed up a little early, wandered up into the viewing section, and was going to pick a seat.  Before I even sat down, though, I spotted something down at rink level that quickly changed the spirit of the afternoon.  On one end of the rink, behind the glass, they had sectioned off a small area with black curtains -- some rec hockey team had just finished a game, but since I assume the Ducks prospects were using the actual locker rooms to suit up, these poor suckers had to change out of their gear in a makeshift tent or something.

First thought: Hahahaha, look at those poor suckers, changing in front of everyone.
Second thought: Hey, wait a sec -- isn't that McRed?

"McRed", as I'll call him, was a two-time former roommate of mine, a die-hard Kings fan, and a pretty close pal since high school -- he was essentially the first person I regularly watched hockey games with as a new fan.  I'd known vaguely that he had a hockey game that day from talking with him earlier in the week, but I had never put together the possibility that I'd run into him here -- heck, I didn't even know that I'd be there.  So I headed on down to say hi to him in his locker-tent, and that's where things started to fall in Sleek's favor.

Because pretty soon afterwards the prospects came out on the ice, and instead of being seated up high on the side of the rink, I was suddenly standing rinkside with McRed and his teammates, and as an added bonus, I was drinking beers out of their team cooler, too.  Suddenly this was turning out to be a very very cool event -- here's basically what I was looking at for the first half of yesterday's scrimmage -- go shoddy iPhone camera! 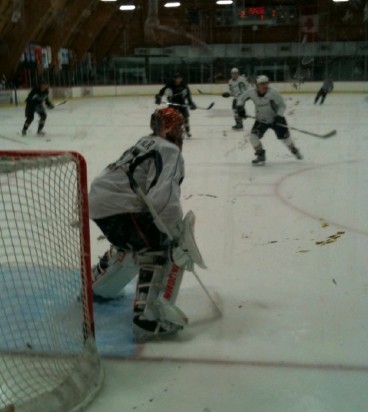 Former Sharks prospect Timo Pielmeier, one of the pickups in the 2009 Moen/Huskins trade.

Now I'm not going to offer that much in terms of "who looked good" or anything useful -- I made some of those observations, but generally they're only based on one play I saw a guy make that night.  But overall the style and quality of play was pretty astounding -- McRed's teammates were all somewhat in awe as well.  The skating, the skills, the size -- these kids look pretty darn good overall, and it was entertaining hockey to watch up close, especially from a spot I really wasn't supposed to be in and especially with a beer in hand I really wasn't supposed to have.  Damn I'm a lucky fuck. 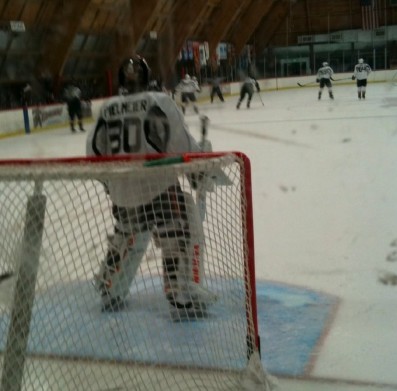 It's tough to spot through my shoddy photowork, but the back of Pielmeier's mask has a
Disney-old-school Mighty Duck logo on it -- way to keep that tradition alive, dude.

After the first half of the game ended, the staff finally got sick of us drinking rinkside and told us it was time to go, but that timing was fine -- McRed and most of his teammates were departing then anyways, and I knew that I had to go up to the stands again to find Arthur from Anaheim Calling (click there, btw, to get much better reporting on what happened on the ice yesterday); I had texted him earlier to tell him I was coming but hadn't even looked for him yet.  I found him, and soon Jen from AC joined us as well -- that was very cool.  We spent most of the second half talking about various imagined Ducks-blogger issues and just hanging out and enjoying the hockey.  Arthur was able to provide me with some background on some of the players I had been watching -- it was pretty impressive, since I was mostly just throwing out whatever name was recently visible.

I did have to take off before the second half ended, birthday dinner and all, so I said my goodbyes with 90 seconds to go and started out.  But even then my BoCventure wasn't over -- I got stopped by both brokenyard and Mike in OC on my walk to the car, which was very cool as well -- it's always a blogger thrill to meet real-life commenters.  Then it was off to Shabu Shabu and the birthday dinner -- that was loads of fun, too, but much less hockey-relevant.

So that's the story -- a prospect event that I really didn't know what to do with turns into an on-the-glass beer party and a solid blogger meet-up -- go lucky birthday.  I still don't really know that much more about the Ducks' prospects, but I do feel very encouraged by the general caliber of player I saw yesterday, plus it's always cool to catch a hockey game in July.

And hey, you too can be a part of the lucky vibe today -- break out your vuvuzelas, pour yourself a way-too-stiff drink, and if you're a talented UFA, why not celebrate with a paycut in Anaheim?