Outside the Box: Why not go the distance with B-Ry?

Share All sharing options for: Outside the Box: Why not go the distance with B-Ry?

As for the Anaheim Ducks specifically, we have our own issues we're waiting on -- waiting for Teemu, waiting for B-Ry, waiting for Wisniewski, and hopefully waiting for some domino moves on the blueline beyond that.  Now I'm a pretty patient dude these days -- I know there's no meaningful games scheduled until October -- but I still did want to write a crazy think-piece about the RFA negotiations with Bobby Ryan, as they seem to be going nowhere lately.

Now I should note that I'm a pretty bad blogger -- I haven't followed the back-and-forth between B-Ry and Barstool Bob very carefully, but as I understand it we're stuck in a dispute about contract years, not money.  B-Ry seems comfortable enough with a $5M-or-so cap hit to keep him in the Getzlaf-Perry neighborhood, but the Ducks want to sign Bobby for five years, covering 2 potential years of UFA paydays; Bobby and his agent apparently want just a 3-year deal, letting him hit the UFA waters alongside Getzlaf and Perry.

Now probably we're at an impasse because both sides are considering one of the two options, and that's probably fine, but I wanted to throw a third crazy option out there: why not try to sign B-Ry to a lifetime contract?  There might be a solution there that could meet both parties' needs. 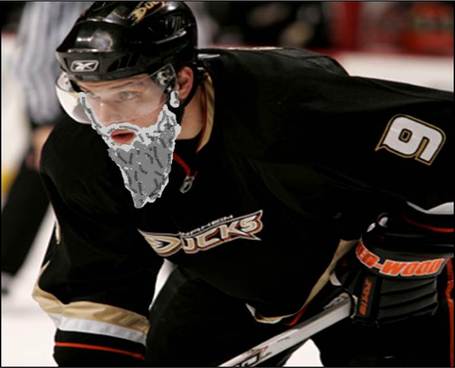 How 'bout it, B-Ry?  Wanna commit some of your old man years?

Now I know that there's a huge amount of risk in lifetime deals, and generally I'm opposed to them, but there's a few things to consider here:

1. The window for signing lifetime contracts is probably closing very soon. I think this loophole closes during the next CBA negotiation.  You can probably get away with this sort of thing this summer and next, who knows beyond that?

2. There is risk in signing a lifetime deal for sure, but the Ducks wouldn't bear it alone -- plenty of prominent teams have already put themselves at risk with similar signings, and I doubt the NHL will burn all of them.  The risk is mitigated because of teams like Detroit, New Jersey, Chicago, and Philadelphia -- I believe the league will allow an out from the awful years at the end of a contract.

3. Lifetime contracts should only be used for special players, and I think Bobby Ryan qualifies.  Other than this contract holdout, there's really been very few question marks about the kid's mindset or his ability to play.  He's young, talented, improving, and for-the-moment popular; he certainly is a decent candidate for a lifetime deal -- at least the best candidate we'll see negotiating contracts in the short term.

4. A lifetime contract for B-Ry (at least the way I'm imagining it) does not guarantee that B-Ry finishes the contract as a Duck.  In fact, I think the contract can be structured so that it's probably unlikely that he does.  I'll expand on that after the jump.

First off, here's an example of a possible contract I'd offer B-Ry.  I don't know that the focus here should be on actual dollars or length -- those are quite negotiable, but I picked fifteen years, which carries B-Ry to age 37, and an averaged cap hit of $5.2 M.  The individual years go something like this (in millions):

What does this accomplish?  First off, for the Ducks, they know that they will have four years up front where the actual salary will be lower than the cap hit -- this is quite attractive to lower or middle spending teams like Anaheim, where cap hits are largely irrelevant but real dollars reign supreme.  Then begins a stretch of seven years where his cash cost will exceed his cap hit -- this is much more attractive to rich cap-ceiling spending teams who are much more focused on average salary.  I think this means that unless B-Ry proves himself to be incredibly valuable (or valueless), he likely gets traded after four years or so to a "Rich Dad" team.  The structure of the deal enables the middle of B-Ry's contract to look attractive to big spenders in the marketplace, and rather than the Ducks losing Ryan for next-to-nothing in the UFA process, they may be able to pry some assets for Ryan's somewhat-cheap-cap-hit contract.

For Bobby Ryan, I think there's some charm to this deal also -- he gets some future security, and largely gets what he may be looking for in unrestricted free agency: a nice pay raise and a ticket out of Anaheim.  He'll likely get to play his early 30s on a cap-spending team who likes his lowered cap hit -- theoretically it should enhance his chances of winning the cup.  And if his game falters in his late 30s, he can retire without missing out on too much of the overall contract value.

Now of course there's tons of snags -- I can't truly say what either side really wants in the short or long term, so I'm conjecturing like crazy today, and it's possible either side is risk-averse enough that this sort of notion is ridiculous from the start.  But with both sides seemingly stuck in negotiations on the 3 years vs. 5 years debate, perhaps a crazy outside-the-box third option can get both sides what they want, or at the very least get the player and team to start talking creatively.

What say you, Ducks and hockey fans?  Is this sort of proposal crazy, or is there perhaps a workable solution here?  I'm just throwing out some theories -- shoot them down or fix them up in the comments.