Weird day.  I had about three hours to contemplate the Ducks paying James Wisniewski $3.25 M next season before he was shipped off to the Islanders for a 3rd-round pick.  And rather than write something meaningful, why not take the patented Sleek cheap way out and hide behind this cartoon? 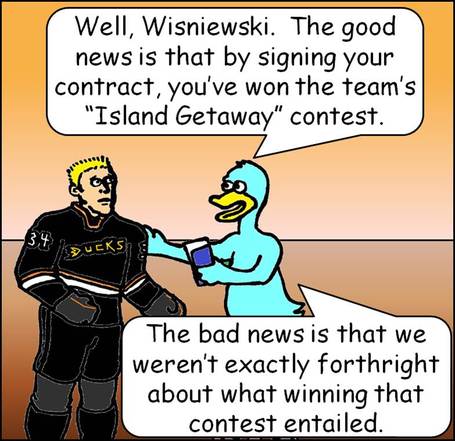 Here's where this leaves the Ducks salary-wise, stealing extensively from Capgeek.  Still, of course, missing Bobby Ryan and Teemu Selanne.

For the Ducks, the "CASH" columns matter much more than the "CAP" columns, and it's worth noting that there are about $900k in performance bonuses included in these numbers, $500k on Fowler's contract alone.  There's definitely money to spend and plenty of cheap contracts that could be used in a trade -- Ducks seem remarkably set to deal from strength with an over-the-cap team.  We can finally do a reverse-Mathieu-Schneider!

Either that or Scott Niedermayer surprises us all with his annual un-retirement.  That'd be awesome.

Feel free to add your reaction in the comments -- I'll write more about it later.