Share All sharing options for: Ducks transmit the disease Emingitis to Rangers

Well, while Rudy's off to a bachelor party weekend pretending not to follow the Kovalchuk sweepstakes, I've been devoting my blogging energies to ridding the west of CGI menaces in Red Dead Redemption.  Imagine my surprise, then, when Rudy texted me to let me know that Steve Eminger was no longer an Anaheim Duck.

Indeed, it's not a bachelor prank: Ducks trade Steve Eminger to the NY Suckers Rangers for Aaron Voros and prospect Jonas Ryan Hillier.  Here's a cartoon of my surprise -- the duck is playing the part of me: 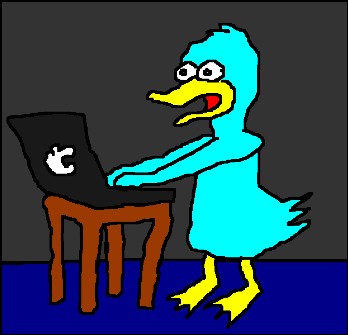 He's also demonstrating how I drew this cartoon -- drawn on a mousepad in fake-Paint.

Now we Ducks fans here at BoC may have been a bit hard on ol' Eminger -- one of his biggest problems was showing up in the immediate departure of Chris Pronger.  We had become so used to overall blueline competency that the mistakes of Eminger (and others for sure, Mr. Whitney) became a bit more glaring.  His inability to hit the net on his shots, his unwillingness to even pretend to play the body -- these failings became his traits, in a way.  All we could see was shortcomings.

It's not that he didn't try hard, or wasn't an okay player for his not-too-terrible salary; he can be a bargain next year if he's not relied on for too much and expectations are kept pretty low.  But I'm glad the Ducks aren't doing it again next year -- without Niedermayer now, there's too many minutes to distribute, and some would have definitely fallen on poor Eminger.  And whether fairly or not, he's not a guy I have that much confidence in when I see him out there -- sorry, dude, I'm too used to being comforted by Pronger.  :)

This isn't truly a huge deal -- shuffling deck chairs, sort of -- the Ducks certainly have more to do as this summer progresses, especially on the blueline and especially with a particular Finnish 40-year-old.  But it is nice that the Ducks are replacing some of the blueline toughness in Mike Brown's draft-day departure (I swear, that's a post I'll write during a break in my cowboy journeys) -- I think Voros is pretty safely pencilled in the Ducks' bottom six, but I haven't really watched a lot of Rangers games to know for sure.  Mostly I remember him as a member of the Wild, and he seemed pretty good then -- looking forward to seeing him lace up an Anaheim sweater.

At least more excited than I would be to see Eminger in a Ducks uniform again next year.