Well, everyone knows Custer died at Little Bighorn. What this Wikipedia presupposes is... maybe he didn't? 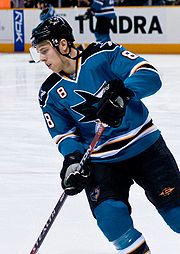 Before we begin, I need to get something out of my system:

Moving on, I already hit on most of the easy joke-targets from Pavelski's Wikipedia back on May 2nd (simpler, less painful times) so go read that if this isn't funny enough for you, you bastards.

He began playing at age 2. His mother said: "He loved anything athletic, and hockey was just a good fit for the winter. You didn't realize that your son was that good."

Uh oh, Pavelski's mom has some weird second-person perspective thing going on there. Oh well, she gets a pass because it was during an interview and because she birthed an American Hockey God from her loins. Excellent work, Mrs. Pavelski's uterus! We salute you!

This is a great example of acceptable, semi-relevant information about a player's relatives on Wikipedia. It's slightly interesting when an NHL player has a relative that is also a player of some note, so I'm fine with mentioning that. Notice that this article doesn't mention who Scott Pavelski is marrying or dating? That's because nobody cares, and if someone DID care they certainly wouldn't come to Joe Pavelski's page looking for that info. Let this be a lesson to you, Jed Ortmeyer's Wikipedia page.

During the 2010 Stanley Cup Playoffs, Pavelski had three straight multigoal games (Game 6 versus Colorado and Games 1 & 2 against Detroit), not only helping the Sharks win all said games, but also becoming the first player to do so since Mario Lemieux in 1992.

On January 1, 2010, Pavelski was selected to the 2010 USA Olympic team, the only USA player from the San Jose Sharks. [...] He was nicknamed "Swiss Army Knife" by USA general manager Brian Burke.[9]

In the offseason,[Which?] Pavelski signed a three-year entry level contract that paid him US$850,000 per year (not including bonuses) until June 2008.[citation needed]

Excellent use of passive-aggressive notes here.

Pavelski's Wikipedia page is actually kind of disappointing. I was really hoping for more. He can take comfort, however, in knowing that he has a much better page than either of his alphabetical neighbors on the list of "1984 Births." Adam Pakovich and Kevin Pauwels suck! Joe Pavelski rules! WOOOOOOOOOOOOOOOOOOOOOOOO - 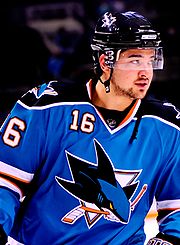 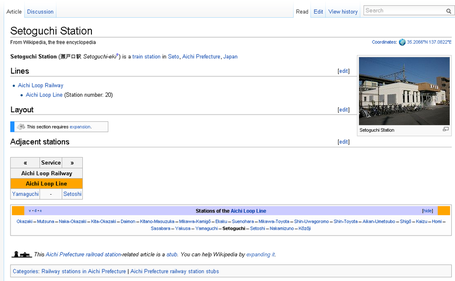 Oh okay cool, so it's the WORST TRAIN STATION in all of Japan. Seriously, that picture makes me want to kill myself. I always imagined Japanese train stations would look more like something out of Blade Runner or Minority Report. That just looks like a random part of Los Angeles.

I guess they have the link to the train station because Devin Setoguchi is the main result if you search for "Setoguchi" on Wikipedia. If you use Firefox*, you can go directly to any Wikipedia page just by typing "wiki [subject]" into your address bar. Sure enough, "wiki Setoguchi" leads you right to Devin's page. Cool! Time for some research...

"wiki Boyle" breaks the thing and leads you to a Google search that's mostly about Susan Boyle.

"wiki Vlasic" disappointingly does NOT lead right to the pickle company.

"wiki Murray" leads to a list of people with the FIRST name of Murray. I got distracted here by clicking on a link for "Murray, a demonic talking skull in the Monkey Island game series."

I hope we've all learned an important lesson here.

Setoguchi played one season with the now-defunct Crowsnest Pass Timberwolves

That's all for Setoguchi's page. Honestly he didn't turn out to be much more interesting than that stupid train station. These young players need to step it up and start having crazy shit happen to them, like Boyle. Or maybe they can ignite some ridiculous debate about their birthplace, like Marleau. Either way, Pavelski and Setoguchi have some big Wiki-shoes to fill.

Next time, in the 10TH AND FINAL VOLUME of this masturbatory time-waster series, we'll finish out the alphabet and I'll try and move on with my life.

* = this may be true for people who use Internet Explorer too, but who cares about them?