Boy, August is sure boring, eh?  To help pass the month, the NHL Network has been showing a series of the last 35 cup-clinching games, and tonight they've finally reached 2007 (fuck all those years before that).

As such, in lieu of any original pass-the-day content, I thought it'd be cool and lazy to borrow Meg's time machine and look back at what I wrote back then -- one of the benefits of long-time blog archives.  Good times, those:

(Author's note: a lot of this GDP is going to reek a lot of arrogance, as if the wounded Senators are not to be taken seriously in G5. Trust me--I am nervous as anyone about this game, but certain things must be attended to after 15 wins.)

Now that Anaheim sits on the cusp, speculation has begun about who's a suitable candidate for the Conn Smythe trophy.

In terms of scoring forwards, nobody seems to be carrying the team with any regularity. If anything, the kid line has shown the most consistency, but they are still playing in somewhat sheltered minutes. Regardless, the scoring Anaheim's using hasn't been dependent on any one line or one player, really.

In terms of the defense, Anaheim's top two candidates are tainted by games-missed:
So let's take a look at the guy I think should win it, then (surprise, surprise): Sleek-favorite Sammy Pahlsson (my choice after round one, as well as ESPN's current leader). In order to appreciate Pahlsson's Selke nomination as well as his overall value in a game, you probably have to get a sense of the difficulty of minutes Pahlsson plays. At even-strength, it is Pahlsson's job to match rigorously against the opponent's top offensive line and not get outscored.

And by golly he's been doing it very well this postseason, along with his checking buddies Rob Niedermayer and Travis Moen. Playing against top offensive threats, Sammy was +1 against Minnesota, +3 against Vancouver, +2 against Detroit, and +1 so far against Ottawa. Not only that, but his line's effectiveness led all four opposing coaches to tinker with their top lines, in an effort to free up a scorer: Gaborik got split from Demitra, Sedin got split from Sedin, Zetterberg got split from Datsyuk, and Alfredsson got split from Heatley.

On top of his difficult even-strength assignment, he also kills penalties for the Ducks—LOTS of penalties (remember, these are the punch-happy Ducks). Pahlsson leads the league (including defensemen!) these playoffs with 105 shorthanded minutes, including numerous 3-on-5 assignments.

And despite the toughest even-strength minutes available, and despite playing as many shorthanded minutes as possible, and despite hardly getting a sniff of any power play time, when you consider all this together, Pahlsson has been on the ice for 16 goals-for, and 15 goals-against (es: 14-8, pp: 1-0, pk: 1-7). Basically, Sammy has taken the toughest twenty minutes of every game, and helped turn them into a break-even/positive result.

For sure he's had loads of help, from the goaltender to the defensemen to his impressively tenacious wingers. But he is the steadfast centerman--the key to Anaheim's defensive match-up system, as he has been for each and every game this season. Oh yeah, did I mention that Sammy's been on the ice for 7 game-winning goals this postseason, including 6 of the last 9?
Pronger, by the way? 28 goals-for, 14 goals-against (es: 16-7, pp: 10-2, pk: 2-5). It's a shame he's such a headhunter.

So, now that you've been sufficiently brainwashed, who's your pick for if-the-Ducks-win MVP? Leave it in the comments.

If the Ducks can win tonight, one could argue that they have made the most money possible in these playoffs without having to face elimination. In every series thus far, the Ducks have played three home games, eliminating opponents at home to avoid unnecessary travel. Anaheim saved trips to Minnesota, Vancouver, Detroit, and possibly one trip to Ottawa. Now I don’t have much clue about how playoff revenue-sharing works, but you gotta think this is a significant earnings boost for the Ducks franchise—maybe even enough money to re-sign Giguere?

I'm not going to tonight's game, but I can't say that I'm that bummed about it. I spent my money and had a great time at G1 and G2, and can't cut work super-early tomorrow anyway.

Instead, I'll be where I was last game, reducing stress through comments at IPB's game post. (Be warned, newcomers. You've already got some nicknames to learn. You can check out their G4 post to see what I'm talking about.)

Prediction: Ducks 5, Senators 2. In each series so far, the Ducks have gotten three one-goal wins and one blowout win, and they’ve already got three one-goal wins this series. (Plus, this was the score the last time the Cup was set to be awarded in Anaheim.) Goals by Pronger, Selanne x2, Pahlsson, and Getzlaf.

Not too bad a prediction, but I forgot to factor in Chris Phillips.  Feel free to leave your precious SCF G5 memories in the comments.

Okay, I lied -- here's some original content, a silly movie poster pun based on "Juno" -- the best part may be the lettering. 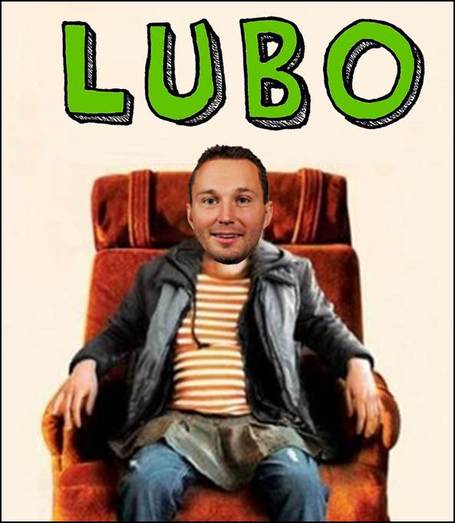 Even as a sassy pregnant teen, he's adorable.

Go Lubo -- it's going to have to be a solid year from our one proven scoring defenseman, that's for sure, and I can't wait to see his antics this season.

And no matter which season we're talking about: Go Ducks.