Who would you put on Mount Duckmore?

Share All sharing options for: Who would you put on Mount Duckmore? 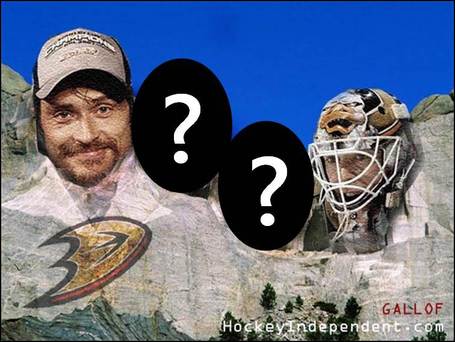 Two faces hidden so you'll have to click over.

Puck Daddy is running a summer series -- creating a photoshop Mt. Rushmore for each of the 30 NHL teams.  It's a nice way to pass a slow month of August while celebrating the founding forefathers of hockey each franchise has enjoyed.

As "Anaheim" comes first in the hockey alphabet, my four choices for the Ducks franchise get to debut the series.  Truthfully, my first instinct was to create a BoC poll and let readers make the hard decisions, but as the Puck Daddy overlords wanted secrecy, I bit the bullet and decided.

Feel free to read the piece and debate your choices over here -- hell, Kings and Sharks fans can predict their upcoming foursome, too.  August fun!