Share All sharing options for: Movie Week: Air Force One

I can't decide what the most ridiculous/best part of Air Force One is. A few nominees:

Harrison Ford's Haymaker. Harrison Ford has thing he does where he fucking GOES FOR IT whenever he punches anyone. He throws his whole body into it and he doesn't bend his elbow at all. Every movie he does this, whether he's fighting a giant Nazi in front of a plane or an Irish terrorist or a computer hacker. It's like a Falcon Punch. I'll be damned if it's not effective though.

The Greatest Pilot of All Time. Is there a greater movie death than throwing your plane in front of an oncoming missile to save the president of the United States from certain doom? I can't think of one. I'm a big fan of noble sacrifices in movies, even better when they're instant and with no questions asked. That's how I want to die, except instead of a missile it's a car and instead of the President it's some sort of noble hound. That's not too much to ask, is it?

[I've decided that when I get a dog I'm going to name it Murray if it's a big dog and Scooter if it's a little one ("Scoots" for short). You can't get mad at a dog named Murray ("Oh Murray, you rascal!") and yelling, "Scooter!" and watching him bound toward me would be awesome. Women plan their weddings, I plan adventures for me and my pooch.]

The rescue. Why don't they just send parachutes down to Air Force One? Seems like it'd be quicker and safer.

"Not so fast, you son of a bitch!" The thing about Air Force One is that it feels like it was written by me when I was 12. "Oh, OK, then the president gets attacked by fighter jets but this one guy's all, 'Not so fast, you son of a bitch!' and goes pew pew and then the president's OK!" The whole time I watch that scene my head's thinking, "OK, this is retarded," but my heart's thinking, "America, fuck yeah!" My heart always wins. Pew pew, take that you Russian fuck! 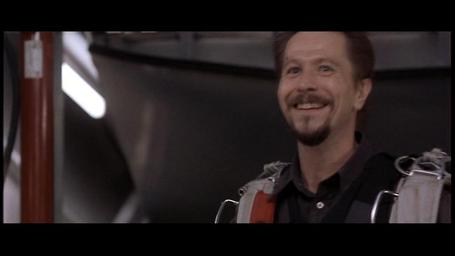 Dude gives it his all, gotta respect that. I think the key to creating a great action movie villain is to find a classically trained actor and tell him to go nuts. Look at Die Hard: the 2 awesome ones have classically trained actors as the villains (Alan Rickman, Jeremy Irons), while the 2 kind of crappy ones have understated actors at the main bad guys (William Sadler, Timothy Olyphant). Die Hard 5: Die Hardingest needs to star Kenneth Branaugh, clearly. He can be Adolf Gruber, the shitty youngest brother, or something.

A Female Vice President? I mean, c'mon. Also, why doesn't she sign that fucking order? THE PRESIDENT HAS BEEN KIDNAPPED BY TERRORISTS. How is this even a debate, you fucking idiot, he's going to release Radek! Stop him! The guy from Quantam Leap and Langoliers is the real hero in the movie.

How Much I Love Air Force One. It's dumb as shit and yet I can't stop watching. I'll love any movie that has these 3 things: jingoism, Harrison Ford, Gary Oldman. It could be a movie about Ford and Oldman rekindling a long dormant romance and I'll watch the shit out of it as long as they demean Eastern Europeans at some point. Great, great movie. At some point during this day, I'm going to yell, "You lecture me on the RULES OF WAR! Well DON'T!!!" and no one will know what the fuck I'm talking about.

Then I'm going to hit them with a Harrison Ford Haymaker.