Share All sharing options for: Movie Week: Reign of Fire

Today is Reign of Fire because it should be awesome but it's not.  Oh, and I also wrote about the Ducks over at SBNation Los Angeles.  Take that, Kings!

There is a movie out there starring Christian Bale, Matthew McConaughey, and Gerard Butler.

This movie is about modern humans fighting dragons in a post-apocalyptic wasteland.

This is the poster: 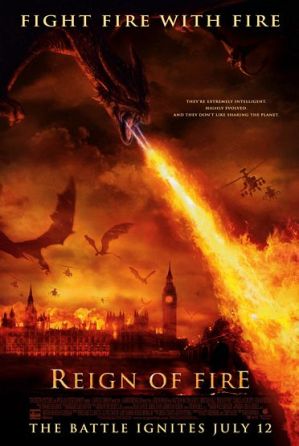 Here's the thing: this movie kind of sucks.

How is this possible?

Reign of Fire is probably the biggest missed opportunity in Hollywood history.  I mean, people fighting dragons in modern times, how do you fuck that up?  You do it by making the following mistakes:

Mistake #1: It's too realistic.  Look, I'm all for realism in films, but there are certain films where you need to go for it a little bit.  A film with giant dragons roaming the countryside needs a little chutzpah, you know?  Instead we get a careful description of how the dragons eat (they eat ash, swear to God), how people farm, how people protect themselves from the dragons, all that crap, for like the first 30 minutes of the film.  Basically, there is no way to kill the dragons and the people are all fucked.  Christian Bale is trying to lead his people, along with his right-hand man Gerard Butler, but he's quickly losing hope.

OK, so it's not quite as awesome as you'd hope, but you get an idea of where the movie is going.  Then this guy shows up.

So the whole movie has been spent making you accept that this scenario is realistic, and then you proceed to introduce the single most ridiculous character of Matthew McConaughey's career.  It'd be like having Wooderson show up halfway through Constantine.  (Actually, that sounds awesome, let's do that.)  McConaughey plays (*Sigh) Denton Van Zan, American Dragon Killer Extraordinaire who has a necklace made of dragon teeth to show his skill.  So, to recap: they spent 30 minutes saying dragons were indestructible, then they said this guy is a badass dragon killer.

He doesn't kill a single dragon in the film.  His method of killing dragons gets 3 of his men killed and only works because Christian Bale saves the day.  Then he leads his men straight into an ambush.  Then he tries to kill a dragon with an axe and gets eaten.  Those are literally the only things he does in the film.  Actually, that's not true: there is one part where he beats up Christian Bale and shows off his totally sick tribal tattoos in the process.

There's no reason for him.  The character's retarded.  It's like some English producer thought, "Hey, we need an American in the film to appeal to the U.S. market, but we secretly hate Americans.  Let's make some douche bag Texan and let him fuck up everything he does!  Chip chip!!"

Mistake #3: The method of fighting is stupid.  The dragons are like 50 feet long, can shoot a shit ton of fire, and can't be hurt by regular arms.  "That's OK, the people can use jets to fight them, right?  That would be cool!  Aerial fights with jets, or even helicopters!  Pew pew!"  I'm sorry, Fictional Person I Made Up to Prove a Point, but that never happens in the movie.  They have helicopters... that people skydive out of, after which they quickly get eaten.  Why do they do that when they could have a cool helicopter-dragon fight?  I have no idea.  I think they don't use jets because they're too good and would fuck a dragon up, but if that's the case then change your movie.

Mistake #4: One male dragon?  Fuck you.  What do you do after you've painted yourself into a corner by making the humans helpless against the dragons?  You throw in some stupid bullshit about there being only one male dragon that, if defeated, will basically kill all the other dragons.  Oh, and you also show thousands of dragons chilling in London, only for all of them to disappear except for the one dragon you need to kill.  It's stupid.  Why do that when you could show a giant aerial assault of London and thousands of dragons fighting?  The movie cost $60 million to make, it's not like they couldn't have pulled that off.

The whole movie is tonally inconsistent: it's realistic, it's ridiculous, the dragons are powerful but only because the writers handcuffed the protagonists, the characters are all normal except for one lunatic... the movie was badly in need of a good director but they got some guy who had only directed X-Files to that point.  It's clear that he couldn't handle the scope needed for this kind of movie.  Everything's too small and rushed for a movie that should feel epic.

Meg and I have talked about this movie for waaaay too long and we decided the best way to fix it would be to set it in the 1940s.  The whole movie has a "Battle of Britain" vibe; why not just make it the actual Battle of Britain?  World War II planes versus dragons would be awesome.  Get rid of the American guy, have more than 2 dragon fights in your dragon fighting movie, and make it fun.  Dragons fighting humans in a post-apocalyptic wasteland!  Make it awesome!

Truth be told, Reign of Fire isn't a terrible movie.  It's just kind of there.  It should be the greatest movie of all-time.  Someone needs to re-make it.