Happy Friday, gang!  Apparently Rudy has turned BoC into a mostly-movie-review blog, and I suppose it's my responsibility to bring our collective focus back to hockey -- hahaha, I'm just kidding; it's still August.  Nope, I'm going to write about one of my good offseason friends -- television!

Nowadays TV shows come at us a mile a minute (60 mph, per my math), and it's sometimes difficult to separate the good from the bad.  I'm not really going to help much there, but I did want to highlight one show that has recently caught my fancy -- the Food Network's Great Food Truck Race, airing Sunday nights at 9.  The show, already two weeks into what seems to be a six-week run, not only has an almost-decent concept but has pooled together some charismatic food truckers as well.  And the food looks pretty damn good, too. 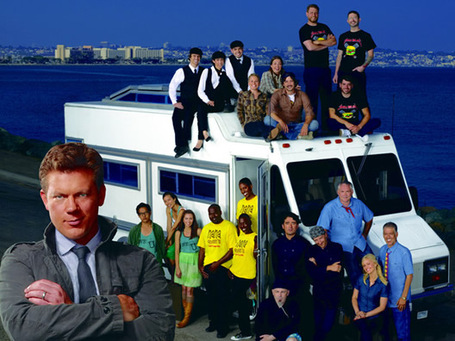 To keep things interesting, each team actually has their own truck.

The challenge is pretty straightforward -- seven food truck teams, three members apiece, go from city to city across the United States (first stop San Diego; second stop Santa Fe, NM), and are provided a fairly tight budget in order to fill up their pantries.  In each city, they are given some 30+ hours to find a parking spot and sell -- whichever team sells the least dollar-wise in each city gets sent on the lonely drive home.

So it's a food vs. food challenge, sort of, though a lot of success has come from calling-ahead preparation and knowing where to park.  And in each city there is a surprise challenge; last week the teams had to invent a new dish involving New Mexico chilies, and it earned one group a much-needed immunity.

To help catch you up, here's a quick profile on each of the seven food truck teams competing, courtesy of the Food Network hype site.  As a blog-related bonus, six of these seven trucks operate in California -- may even be worth a researched visit: 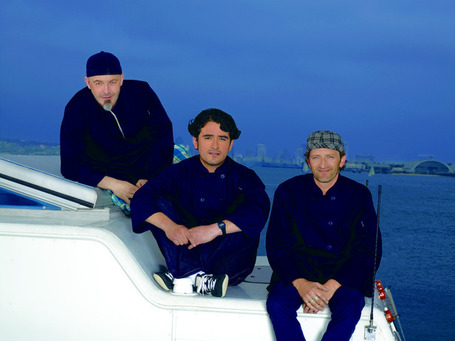 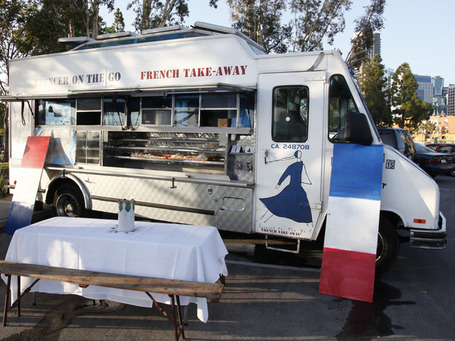 Spencer on the Go is a real strange entrant in this race -- their scope is well outside of normal food truck fare.  Their vision, best that I can understand it, is to provide fine French cuisine served restaurant-style on a tableclothed picnic table, all prepared within the confines of a pretty standard-looking roach coach.  They in particular are hampered by budgetary constraints in the contest, as well as difficulties in drawing random foot traffic; in a contest full of fast food purveyors they are the fish-out-of-water.  Spencer is a bizarre group, too -- the frontman sitting on the right is definitely French, but the dude on the left looks like he's ready to cook up some Chinese food.  Still, they've managed to survive the first two episodes, so they are doing something right, despite playing a somewhat different game than anybody else.  Can they sell in Texas, though? 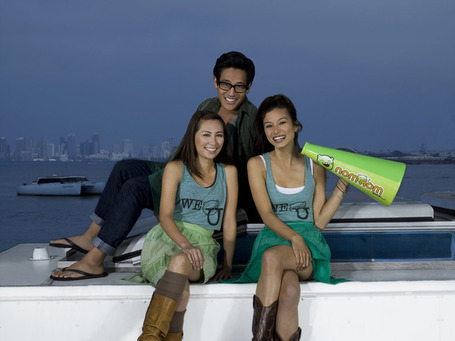 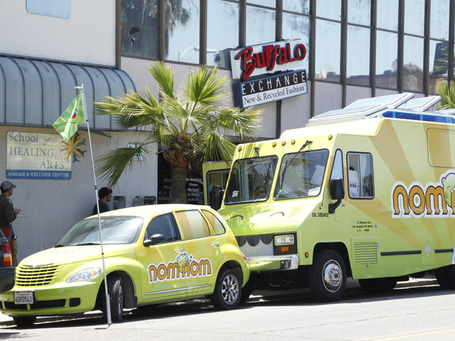 Nom Nom is an almost obnoxiously-successful truck that serves Vietnamese sandwiches, and it is run by three UCLA business school students who really know how to network.  In San Diego, they partnered up with an existing food truck and won the first week handily; in Santa Fe, they called ahead and were interviewed by a local newspaper reporter, and were popular before they even arrived -- Nom Nom swept week two as well.  But it's not just that they have good business minds and a good-selling product; they're cocky, too.  In Santa Fe, Nom Nom was doing such fantastic business that they didn't even bother attempting the immunity challenge -- they were too busy to take time to invent a new dish.  Tough to argue with their results, though -- they turned $300 into over $3,000, and look pretty unbeatable so far. 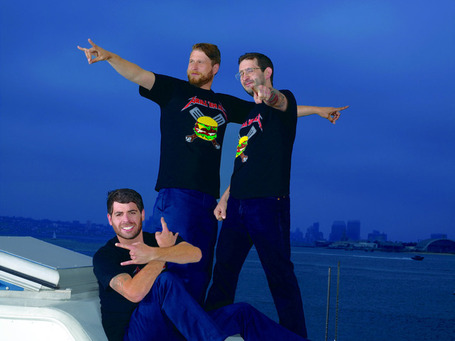 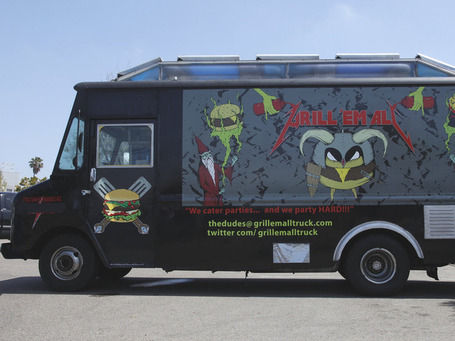 The Grill 'Em All guys like to think they are the bad boys of the show -- they dress like rock stars and their roach coach is covered in demons and such -- but behind the image they do serve a quality burger.  Heck, one of their offerings uses frickin' grilled cheese sandwiches instead of hamburger buns!  Out of all the trucks, Grill 'Em All seems like they serve the most natural food truck fare, but they've been hit-and-miss so far -- they narrowly escaped elimination in week one before rebounding nicely in Santa Fe, to the point where other groups were trying to leech off their success.  Their biggest coup was jumping aboard and essentially hijacking a hungry tourist bus -- they look to be picking up steam as the show progresses. 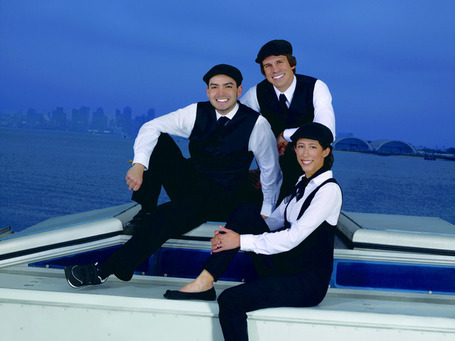 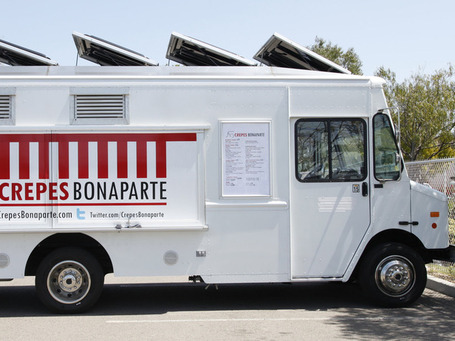 I really don't know what the deal is with Crepes Bonaparte -- they dress like fools and do some sort of softshoe corner dancing to attract business, and the show makes it seem like they never are swamped with customers, but their crepes do quietly sell.  When the final tallies have come in, they've been the most successful team not named Nom Nom, finishing near the top in each of the first two weeks. Nobody on Team Bonaparte is particularly loud, or obnoxious, or in-your-face, but the lure of sweet crepes plus the cute little setup keeps customers coming -- they are contenders in this race for sure.

Quirky and whimsical, but getting the job done.  Ducks equivalents: Teemu Selanne or Saku Koivu, take your pick. 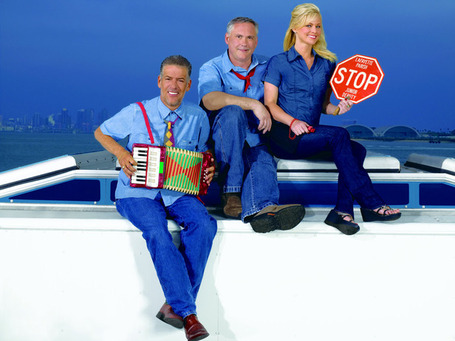 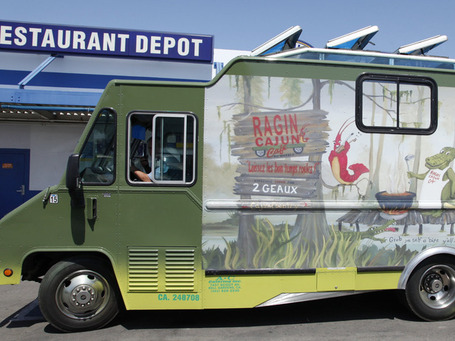 Ragin' Cajun has been the real spirit of the show so far, especially the dude wearing a metal tie and playing an accordion -- he's like a Forrest Gump on steroids or something.  He'll stomp around on his two-step board, yell into a megaphone, run up and down the street, whatever it takes for you to try some of their cajun food -- essentially it's sale by obnoxiousness.  They do serve good food, it seems, but their planning has been faulty -- they tried to poach off Nom Nom's customers via megaphone-bullying in New Mexico, but it didn't pay off at all.  They ended up looking foolish and silly, and their encroachment strategy saw them sadly eliminated in week two.

Obnoxious to the point of endearment.  Ducks equivalent: Corey Perry. 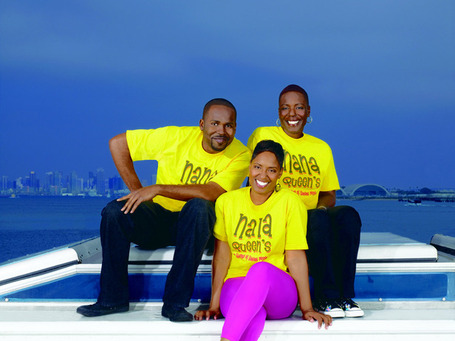 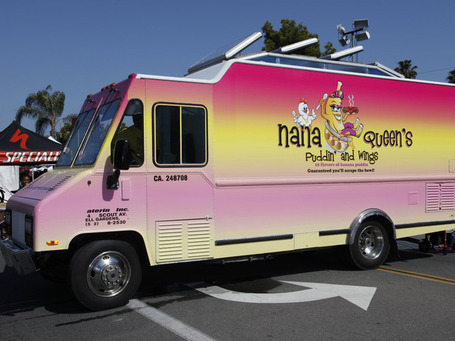 Poor, poor Nana Queens -- we'll never really find out how good their combination of hot wings and various banana puddings would have sold -- they had a fairly disastrous elimination in week one.  After sweet-talking their way into a two-day San Diego festival with loads of foot traffic, they hit a huge snag on day one when they realized that they had no propane to light any fryers.  By the time they fixed that for day two, the dude (who I'll admit pulls his weight by dressing up as a giant banana) managed to oversleep by three hours -- by the time they showed up to the festival, Ragin' Cajun had managed to sweet-talk their way in as well.  It was a flat-out disaster; only by crying to the festival promoter that they were able to reduce the vendor's fee enough to make a profit, but it didn't spare them the show's first lonely drive home. 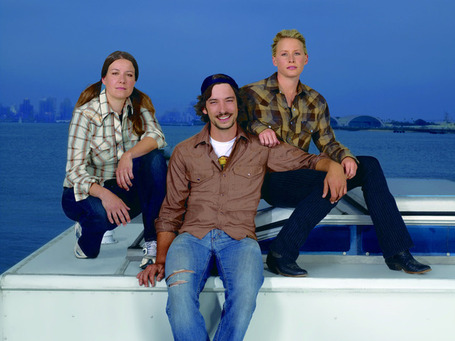 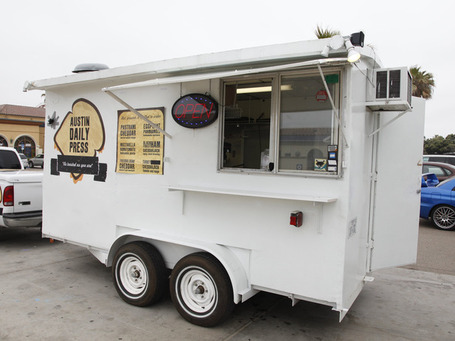 Austin Daily Press is the one entrant from outside of California, and their food truck is more a mobile trailer than an actual roach coach.  They make various iron-pressed hot sandwiches, which do look really good, and the cowboy dude works really hard to try to generate customers -- handing out coupons at bars, offering late-hour "name your own price" sandwich specials, going into an alliance with the burger truck (only to get shafted when the hijacked tourist bus only bought hamburgers).  The Texans are really likable but they haven't done that well in finding good parking locations, and they have found themselves near the bottom both weeks so far.  There is hope, though -- next stop is in Texas!

So now you're caught up on this show -- it's by no means fantastic television, but if you're bored, feel free to give it a view or two.  Or alternatively, if you're a Food Network junkie who doesn't know anything about hockey, now you're all caught up on the Anaheim Ducks. :)

Has anyone eaten at any of these trucks?  Feel free to share that story -- or just share that one silly TV show that has been helping you through August.