Who goes on your team's Mt. Suckmore?

Share All sharing options for: Who goes on your team's Mt. Suckmore? 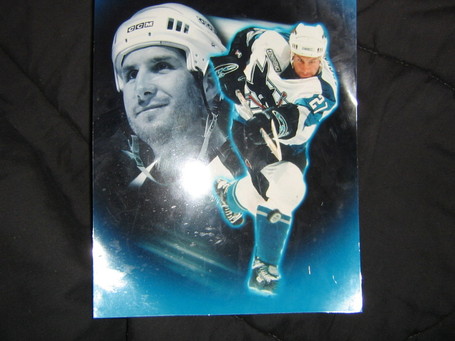 A glossy picture of Bryan Marchment. I own this.

As Earl unveiled to everyone here yesterday, Puck Daddy is going to be doing a series of "Mt. Rushmores" for each NHL team, in which popular bloggers name their picks for the four iconic figures in their team's history. Your favorite players, the best coaches, or the world-class GMs that made your franchise shine through the years. I can't wait until they get to the Sharks (Thornton, Marleau, Nabokov, and Nolan, and if you think different I'll cut you).

This is a great idea for off-season blogging fun. However, it should be noted that happy thoughts and favorite players can only get you so far. There is another side of Mt. Puckmore that needs to be explored. A dark, dirty, terrible flip-side. We'll call it, in the interest of family-friendly blogging (hah!), NHL Mt. Suckmore.

These are the four players (or coaches or GMs or whatever) that, when you think of your favorite team, just fucking drive you out of your mind. The guys that you couldn't stand even when they wore your team's jersey, or players you are embarrassed to have once cheered on. Coaches who stayed long past their expiration date or GMs that couldn't make a good deal to save their lives. The blotches on your team's past roster that embarrass you whenever they are mentioned.

For the Sharks, I have made the following four nominations:

1. Kyle McLaren : This hulking oaf was, for a very brief time, a positive force on the Sharks blueline. He even hurt Drew Remenda, which is a huge plus for me. He could deliver some punishing hits and wasn't a liability on the ice...for a while. But then something happened. He got hurt. After this injury, Kyle McLaren was completely worthless. He stopped getting good hits and was even slower than he was before. He took bad penalties and was a HUGE negative on the team. For game after game I remember shouting at the television, wondering what in the hell McLaren was doing anywhere near an NHL arena. He never got any better, and he never had his playing time reduced!

Because of Kyle McLaren, my least favorite type of player is his model of plodding, penalty-taking defenseman with no offensive upside. For the frustration he caused me until he was finally let go, Kyle McLaren goes on my Sharks Mt. Suckmore. At least things got better after he left, right?

2. Todd Harvey : Having an instigator like Todd Harvey on your team is a double-edged sword. You like him when he gets under the skin of the opponent, but you always feel a little dirty when you see him do something shitty and underhanded. Harvey could fight a little bit (and also knock himself out cold on the ice), but the majority of his time was spent yapping and hosting little segments on that stupid Sharks show with Drew Remenda. Todd Harvey falls into the same mold of player as Corey Perry and Matt Barnaby, and all those players are little shits. They have a role to play in the game and on the team, but that doesn't mean I have to like them.

Up on the mountain you go, Harvey.

3. Bryan Marchment : Currently employed as a scout for the Sharks, Bryan Marchment was, for his time playing with the team, my biggest hockey blindspot. I was an unashamed Marchment apologist, constantly viewing his actions through teal-tinted glasses. I defended his dirty hits and complained when he got penalties that were (in retrospect) probably justly deserved. Marchment was a filthy, dangerous player, and that's something that I just didn't see when he was on the team. Admitting you are wrong is the first step to improving yourself, and I see my changing attitude on Bryan Marchment as evidence of my maturing as a hockey fan.

My Marchment experience should be a lesson to us all. Are you ignoring the misdeeds of a player on your team just because of the jersey he wears?

I'll put Marchment, and by extension my more naive self, up on Mt. Suckmore.

4. Jamie Baker (as a broadcaster) : Nothing against the man as a player, but as a broadcaster he's just not good. He's negative and overly-critical and frequently drunk on air, especially after the second intermission. He reminds me of watching a game with an irritating uncle.

Please share your nominations for your tream's Mt. Suckmore in the comments. It's cathartic.