Don't you hate it when you have only one joke about an incoming player and then you go squander it in the headline?  Oh wait, I made this movie poster, too.  Adapted from a classic; updated to reflect modern NHL rules: 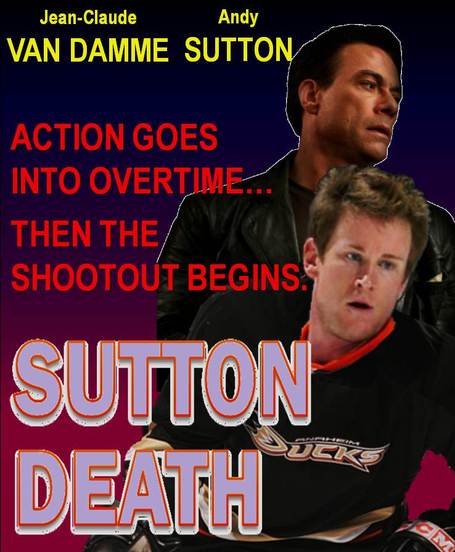 This nickname will really work if he kills somebody or mysteriously falls over dead -- two ways to win!

Andy Sutton signed a two-year deal ($2M, $2.25M) with the Ducks on Monday, and while that's definitely good news, it's another guy who played on the east coast that I didn't pay any attention to last year.  But Sutton  is definitely huge (6'6", 245 lbs) and hugely needed -- if you sorted last year's Anaheim blueliners by total ice time last season, the Ducks have parted ways with guys #1, 2, 3, 4, and 6.  Nearly 75% of last year's blueline minutes are departed, including nearly 90% of special-teams minutes.

Sutton alone won't make up the difference, but any experience is pretty much a life-saver at this point.  Analysis after the jump!

Here's next year's nine blueliners for Anaheim with the minutes they played at the NHL level last year:

The bottom two rows are the key, though -- they show (a) what last season's Ducks defensemen totaled last year while in an Anaheim uniform, and (b) the percentage increase that the guys above would have to collectively achieve in order to match those totals. If the Ducks go forward with the nine guys above, they will by necessity play way more games, way more minutes, and will need to score way more points than they collectively did last year.  Especially on special teams -- consider: last season Scott Niedermayer played more shorthanded minutes than the imports Sutton, Lydman, and Syvret combined.

Scoring from the blueline is another factor.  Last year the Chicago Blackhawks led the league with 188 points from their blueline (this is approximate -- had to tally d-man stats 30 times for this one).  The Ducks were 13th in that category with 158.  The Stars and Devils were tied for last with 112.  As you can see in the table, the nine guys totaled only 96 NHL points last season -- they'll need to step that up for sure, and additional ice time will help make that feasible.

Now of course there's some big X-factors that aren't represented well in last year's NHL stats -- Luca Sbisa's scoreless 8 game sample and Cam Fowler's zero games.  It's possible that one or both of these guys makes an immediate step forward (seems they'll have ample opportunity) and helps close the gap between what these 9 blueliners did last year and what they'll need to do this coming year.  But rather than this being a luxury improvement for the Ducks, it almost has to be a necessity; it's unrealistic to think we'll see huge leaps from any of the veterans.

Also, it's possible that the Ducks could employ a foward (*cough*Kariya*cough*) as a pointman on the power play, helping to close the gap for that man-advantage time, at least.

For today, though, the stats here are purposely pessimistic regarding next year's Anaheim blueline -- based on last year's totals, the Ducks are really rolling the dice this summer.  But at least they are rolling a lot of them -- it's still tough to really say what the result will end up being with this unprecedented amount of d-man turnover. With so many east-coast imports and new kids entering the mix, I'm interested as hell to see how it all turns out.

It's still a gamble, but the blueline is definitely more stable with Sutton on board, at least.  Sutton Death!