The Gang Accuses Lou of Circumvention

Share All sharing options for: The Gang Accuses Lou of Circumvention

Ken Holland: Alright, guys, we gotta do something about Lou.  He's acting like a Goddamn maniac and frankly, I don't know how much longer I can take it.

Mike Gillis:  I know, he's always been insane but he's been even more crazy lately.

Paul Holmgren: He's been drinking and smoking and getting around the salary cap and it's like, hey, why aren't you doing those things with me?

Ken: I mean, we've all circumvented the cap a little bit here and there but he's gone way overboard with this Kovalchuk contract.

Mike: Yeah, I think we may need to accuse him of circumvention.

Paul: I completely agree.  It's like, circumvention?  What does that even mean?

Ken: ...What?  You know, I think we may need to talk to you about you circumventing grade school.

Mike: Yeah man, you've gotten REALLY DUMB lately.  Besides, you know what circumvention is: it's what you tried to do with Pronger but you screwed up and now his contract counts no matter what.

Paul: Haha, OK, Pronger's contract counts no matter what... wait, is that true?

Ken: You're an idiot.

Paul: That's not the point!  The point is, Lou's circumventuating the cap.  AND he won't play One Up Sather anymore.

Mike: What's One Up Sather?

Mike: Is it?  Because it sounds like you call Glenn Sather and tell him you one-upped his offer on a free agent so he'll overbid.

Ken: Is that how you ended up with Danny Briere?

Lou tries to pull a gun but it's wrestled away from him.

Lou: The hell you guys doing?

Ken: Haha, we got you!  You've been circumventing the cap, haven't you???

Mike: No you're not you sick son of a bitch!  You've been circumventing the cap!

Paul: Yeah, AND you won't play One Up Sather anymore!!!

Ken:  Goddammit, Paul, no one wants to hear about how you and Lou call Glen Sather and get him to overpay free agents.

Paul: That's not what it is.

Lou: Actually, yeah, that's exactly what it is-

Mike: OK OK OK, everyone calm down!  The fact of the matter is, Lou's been circumventing the cap and we caught him.

Lou: Hey look, maybe I circumvented the cap, maybe I didn't.  I'm just saying, I don’t know how many years on this Earth I got left so I’m gonna get real weird with it.  Now give me a light; I'm gonna roast this bone.

Ken: I'm not surprised.  But yeah, let's not fight.  Now who wants wine in a can?

Mike: Sounds good to me!

(Suddenly, Dale Tallon bursts through the door being followed by Gary Bettman, AKA Gary the Snail.)

Dale: Stop touching me!  Will you leave me alone?

Gary the Snail: Hey guys, wanna get high and hand out suspensions?

Ken: What the hell, Dale?

Dale: It's not my fault; I signed Marian Hossa and this asshole's been following me around ever since.  I don't even work for the Blackhawks anymore you son of a bitch!

(Paul Holmgren emerges with a can of salt.)

(Paul throws salt at Gary the Snail, driving him towards the door.)

Mike: Who the hell cares? 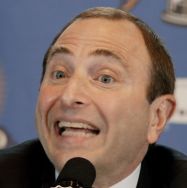