If I said you had a beautiful Wikipedia, would you hold it against me? 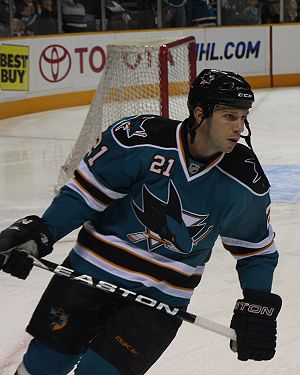 On December 21, 2006, Nichol made headlines when he blindsided Buffalo Sabres defenceman Jaroslav Spacek with a punch to the head, after he thought Spacek made a dirty hit on him. The act earned Nichol a 9-game suspension.

I totally forgot about this. Video of the incident is here. Nichol gets twisted around by what probably should be a penalty and knocks the net off, then comes up and punches Spacek in the side of the face. Spacek's play was dirty but Nichol's was way more dangerous, so Scotty was probably in the wrong here...but it just looks so awesome to see 5' 8" Nichol punching this dude in the face that I forgive him.

On December 3, 2007, he was suspended for five games for cross-checking Montreal Canadiens forward Patrice Brisebois in the back of the head in a game December 1. Nichol was declared a repeat offender under the terms of the NHL Collective Bargaining Agreement.

Repeat offender? If I was Nichol I would have gotten that tattooed across my back in old-English letters. That fucking rules.

I can't find a video of this one, but I'm sure Nichol deserved the suspension. He's a textbook example of a little guy who has to be mean to make it in the NHL, and he's great at it.

On March 4, 2010, Nichol was injured when Montreal Canadiens forward Maxim Lapierre hit him on a late and dangerous hit, leaving him with a Upper Body injury for at least seven days

Why is Upper Body Capitalized and Why Did You Not Put a Period at the End of the Sentence?

Also, "an" Upper Body injury. Somebody fix this, okay? I'd do it, but it would violate my code*. 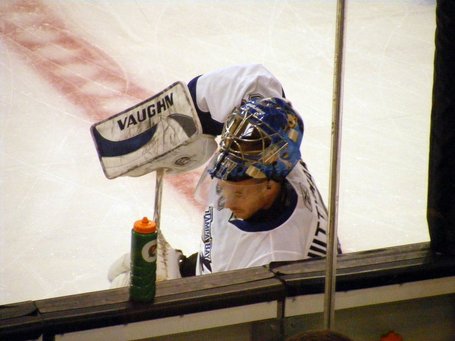 Wow what an awful picture.

Hey, look - his middle name has a footnote in it. I didn't even know you could do that! This is opening up a whole new world of naming possibilities for when I eventually have/adopt/steal a child.

I'm thinking my child's first name will have a possessive "s" and his middle name will just be an interrobang**.

At the 2006 Winter Olympics, while playing for Team Finland, he was voted the MVP of the entire ice hockey tournament.

God damn do I want to watch this guy play for the Sharks already. I'm excited.

Niittymäki was the Philadelphia Flyers' 6th round pick (168th overall) in the 1998 NHL Entry Draft. [7] "I didn't even know I got drafted. I found out the next morning. I was really surprised," he said in an interview in November 2003. [8]

More footnotes! I was going to compliment the various Wiki-editors who have been so meticulous about this page, but then I found out that the whole thing was done by one crazy lady. I guess these days instead of cats or gardens lonely women have pet Wikipedia pages?

Jesus lady, you're not in the footnote Olympics here. I appreciate a good citation FAR more than the next guy, and even I'm starting to get annoyed.

His starting stint ended after the Flyers acquired Sean Burke from the Phoenix Coyotes. Upon Esche's recovery, Burke took over the backup job and Niittymäki was sent back down to the Phantoms. [16][17][18][19]

Niittymäki extended his lifetime winning streak against the Atlanta Thrashers on 6 March 2010 to an impressive 17-0-0.[14][37] He has the longest streak of such amongst active goalies, alongside Detroit Red Wings goalie Chris Osgood, who is 17-0-0 lifetime against Tampa Bay.[38][39][40][41]

This all reads like the opening sixty pages in a true crime book called "The Footnote Murders."

On the first day of free agency in summer 2010, Niittymäki signed a two year, $4 million contract with the San Jose Sharks. He replaced long time Sharks goaltender Evgeni Nabokov because of salary cap considerations. The Sharks' general manager Doug Wilson aggressively recruited him because Wilson believes Niittymäki has a similar playing style in comparison to successful goaltenders such as Antti Niemi and Jaroslav Halak.

Oh god the footnotes are back! Run for the hills!

Hey - who wants to see what a list of 56 footnotes in a Wikipedia article about an obscure goalie looks like? 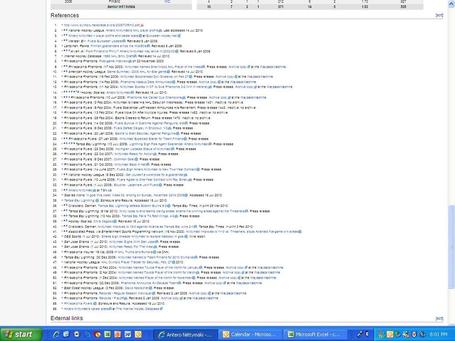 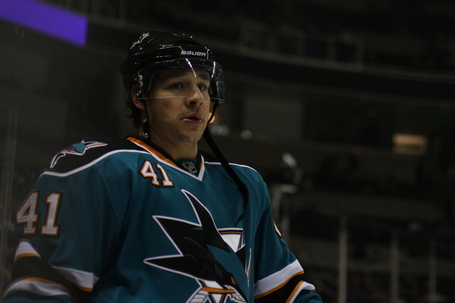 Due to the 2004–05 NHL lockout, Ortmeyer spent the entirety of the following season with the Wolf Pack. He returned to the Rangers full-time in the 2005–06 NHL season, playing on a line with Dominic Moore and Ryan Hollweg, which was known as the "HMO" line

Ah yes, the "HMO" line. Some of the Line Nickname Committee's finest work.

On January 2, 2007, one day after his self-predicted return date,[citation needed]

Uh oh - nobody tell that lady from Niittymäki's page about this.

Help me out here, people. Who married Maggie - Jed or Jake? If it's Jed then this is poorly written and that should be a new paragraph and shouldn't use the pronoun "he," and if it's Jake then it's frighteningly irrelevant for inclusion on Jed's Wikipedia page.

Next time on Wiki-Sharks, I'll be found dead in a shallow grave with my mouth stuffed full of footnotes.

** = Sorry folks, Interrobang is already taken as a band name.***