Recommend this post if you think Meg's a douche bag.

Children's Sci-Fi Shows: What the fuck?

Growing up, my mind was fucked on a weekly basis by children's cartoons.  I don't know what the fuck my parents were thinking.  Imagine waking up one morning, groggy and without your morning Honey Smacks (not to be confused with your afternoon Honey Smacks) and all of a sudden this appears on your TV:

What the fuck is going on?  There's a green bunny, a sexy fox and a little fairy kid shooting toads and there are more cuts than there are in Dark City.  I still have acid-like flashbacks to this show every time I see a frog reading the news... or maybe I have flashbacks to frogs reading the news every time I see this show.  The point is, children's TV shows used to be batshit insane, and I have no idea why.  A few common traits of our favorite Sci-Fi children's shows:

They had animals shooting lasers

Basically, take an animal, strap a laser on his eye or his shoulder or his hip or wherever, get some Korean kid to draw it up, profit.  I get why they do this: they can't really show humans getting killed without it sucking (I'm looking at you, GI Joe) so they use animals and therefore maintain the status quo from show to show.  It's weird, though, and it kind of creeps me out.  Why do bunnies and toads hate each other in Bucky O'Hare but they get along fine in Star Fox?  Are Bucky and Slippy friends either before or after the great Toad War?  Or is it because Slippy's technically a frog and also a pussy?  It confuses children.  To this day I still think there is some kind of fundamentalist war going on between rhinoceros and turtles, if only I could prove it.

And what's up with animals always fighting each other?  Why is every conflict the result of species strife?  Maybe there's a scorpion that wants to ride with the Cowboys of Moo Mesa, why won't they let him into their ranks?  Where's my racial harmony, you crackers?

(As an aside: Bucky O'Hare is a bunny, but he's drawn like a cross between WWII propaganda poster and the Grinch who stole Christmas.  It makes me uncomfortable.)

They were overly complicated

Dino-Riders was about people riding around on dinosaurs shooting lasers.  It's the simplest and awesomest idea in the history of the world.  It's even more awesome than dragons fighting humans.  How do you fuck it up?  By having the single most confusing intro in TV history:

Lost wasn't this confusing.  There are Valorians who can use mind control but they were ruled by the Rulon Empire so the Valorians escaped to Earth but the Rulons followed them and now they fight for control of the Space-Time Energy Protector... the fuck is going on?  How the fuck was my 7-year old brain supposed to keep all that in?  Just say, "Dinosaurs and lasers fuck yeah pew pew pew!!!"  I'd line up fucking today to watch that, not some weird ass mind control bullshit.*  Same thing with Gargoyles: just show gargoyles going around kicking ass.  We don't care about mystical wizards and whatever the fuck.  And The Mighty Ducks... I still don't know what this means:

As it turns out, the legends ended up being true. The last of the Saurians escape Dimensional Limbo and return to Puckworld with an armada of robotic attack ships. The group of four is led by the last of the Saurian Overlords, Lord Dragaunus. They invade the planet, enslaving the people of Puckworld so that they can produce more weapons to conquer the universe. However, a resistance was formed by Canard, a brave duck who found The Mask of Drake DuCaine in a tomb in the mountain called Twin Beaks. With it, the wearer of the Mask could see through the Saurians' invisibility cloak. Canard formed a band of Ducks to fight Dragaunus. The members of his team consists of Wildwing, Nosedive, Tanya, Duke, Mallory and Grin. They go on a mission to destroy Dragaunus's fortress the Master Tower and free the planet from the Saurians' control. However, Dragaunus and his forces escape in their ship, the Raptor. The Saurians opened up a dimensional gateway and did the same thing that they did to escape Dimensional Limbo, attempt to escape through it. But Canard and the others followed him into the portal with the Aerowing, intent on capturing him and returning him to where he belongs and return home victoriously.

That was a weird ass show, man.

*...Of course, I did own that big ass T-Rex with the sweet laser attachment, so maybe they just figured kids wouldn't give a fuck about the story anyway.

They had acronyms.  Lots and lots of acronyms.

Examples: All of them

Why you would call something "Sentient Protoplasm Against Colonial Encroachment" and shorten it to "S.P.A.C.E." when you could just call it a normal name kind of ties into the point below...

They had the dumbest fucking logic

OK, so there are 5 magic rings that a kid from around the world has: Earth, Wind, Water, Fire, and ...Heart.  Imagine you're some kid from Ghana or whatever and all of a sudden you're whisked away by the planet.  They tell you you're one of 5 chosen people and you represent one of the 5 elements of the Earth.  Then you're told that you best represent Heart.  Would you be offended?  Wouldn't a small part of you think that the Earth just called you a fag?

...Call me crazy, but shouldn't they combine their powers all the time and use Captain Planet to fight regular criminals and let the police handle the polluters?  What is a human trafficker going to do to a blue guy with a mullet that can throw lightning bolts?  Why fight the one thing that can harm you?  It's baffling.

And if Captain Planet were busy punching rapists to the Moon, wouldn't the regular police be able to kick the hell out of the polluters?  Lieutenant Smog-o would throw a cloud of smog at a policeman, the police would shoot him in the fucking head, problem solved!  I swear, it seems like no one thought this through.

And Mighty Morphin' Power Rangers... I've just never understood why the bad guys didn't just get big right at the beginning.  Why send Putty Patrollers, then whoever could shoot sparks out of their hands (they could all do this), THEN get big and destroy half a city (imagine how many people were crushed by Zords in that fucking city)?  Just get big first, step on the high school all those little dorks go to, then go do whatever the fuck you want!  It's so simple!

The Mighty Ducks had a goalie as their captain.  C'mon, no one's stupid enough to do that.

There was always a human and they always, always sucked (except Casey Jones)

Examples: Bucky O'Hare, Captain N: The Game Master, Teenage Mutant Ninja Turtles, The Mighty Ducks, pretty much all of them

See, when all of your main characters are animals, you're going to have a hard time getting your child audience to connect with them.  So what do these show creators and probable child molesters do?  They throw in some annoying ass kid with the group.  The intent is to get kids interested, but really, kids don't give a fuck about a human.  Why worry about Willy DuWitt (that's a weenie name if I've ever heard one) when there are toads and bunnies fighting to the death right off screen?  Why wonder about Captain Nintendo's problems when you can see Simon Belmont hang out with Mega Man?  Why care about Casey Jones?

Now that we know the common characteristics of our favorite children's shows, I'd like to unveil my own.  Without further ado, I give you...

Far away in the Vachon universe, the Knights of the Interplanetary Nascent Galaxy Squad had roamed for millenia, nurturing new star systems into existence with care.  The balance was lost, however, when the evil Lord Badd and his band of ruffians threatened the balance.  The K.I.N.G.S., led by Gasper Darkeyes, were able to defeat Lord Badd and banish him to a distant galaxy called... the Milky Way?  Yeah, that's right, I think.  The victory came at the cost of Gasper Darkeyes' life, however, and young Anze Darkeyes had to take his father's place.  Seeking revenge for his father's death, Anze pursued his father's killer to Earth.  There they assumed the form of animals to blend in with society.  Lord Badd's crew turned into, like, beetles or something.

Anze Darkeyes, a raccoon and the leader of the group.  Possessed with the ancient Dark Eyes of Lothria, Anze can see into his opponent's minds and find their weaknesses.  Haunted by the loss of his dad, Gasper Darkeyes, Anze is unsure if he is capable of leading the group; however, Anze is clear-headed in battle and always quick to defend his teammates.

Dustin Sleepsbrow, a turtle and the enforcer of the group. Dustin is fiercely loyal to Anze Darkeyes and has been ever since Anze saved Dustin from the clutches of a vicious beezmar.  Dustin's favorite things are fighting and sleeping, though not necessarily in that order.  Dustin can lift heavy objects with the use of, oh I don't know, the Gloves of Ping, uh, Ding or some shit.  When awake, Dustin is a fierce fighter.

Drew Dangery, a precocious sloth.  Hey, here's a picture of a sloth so you know what I'm talking about: 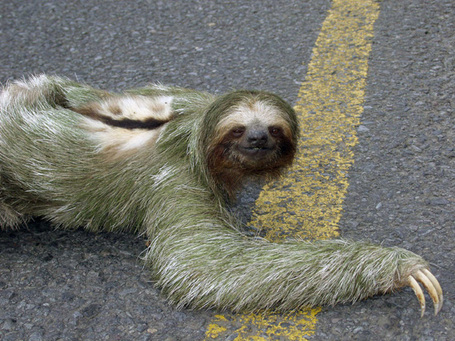 Despite his species' inherent nature, Drew is quick-witted and fleet-footed.  The group's submarine pilot, Drew is the youngest in the group and the most likely to get himself into trouble; however, he's probably the best at getting himself out of trouble.

Jack Imadouchebag, a goose.  A serial rapist in his homeland, Jack was banished 1,000 years ago to Earth and now has been forced to join forces with the rest of K.I.N.G.S. to stop Lord Badd.  Known for his sonic scream that can annoy his enemies into submission, Jack can be a valued teammate if you can control him.  The dumbest man in the group, Jack is often jealous of Drew and tries to rape him at every turn.

He also has syphillis.

Ryan Smyth, a pre-teen mincing gaywad who is worthless and always gets the gang into perilous situations.  No one likes him and he is habitually raped by Jack Imadouchebag.  He has syphillis too.  AND Chlamydia!

Can Anze, Dustin and the rest of the K.I.N.G.S. stop Lord Badd and bring peace to the galaxy?  Sure, why not. 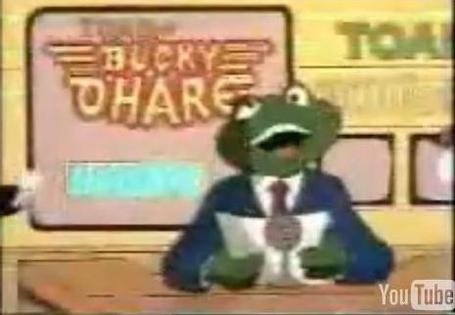