I wrote up a little ditty for SBNation Los Angeles about the Kings training camp battles to watch this weekend.  My prediction* that Kyle Clifford will make the team is off to a good start!

*It's actually Quisp's prediction from like 6 months ago but I'm stealing it. What is he going to do about it?  HAHAHAH- ow!  Hey, stop throwing things! 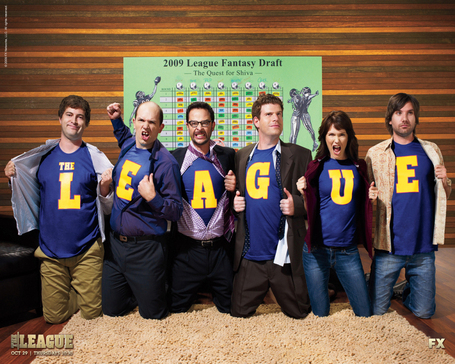 Hey, watch The League.  Do it now.  Well, not now; tonight.  But watch it.  The League is one of those shows I happened to catch last season despite not liking the commercials or the premise that much.  ("A show about a bunch of fantasy nerds?  Why don't I just go over to Earl's house and hang out?")  But the show is really, really funny.  It's created by Jeff Schaffer, a man with an impressive writing credentials:

-EuroTrip (despite the lame premise, EuroTrip is actually really funny)

-He was also an executive producer for the latter half of Curb Your Enthusiasm.  The guy knows what he's doing.

Anyway, the show is ostensibly about a fantasy league, but mostly it's about a group of guys.  They're all in various stages of marriage and they all use their fantasy league to get away from the problems of being an adult.  It's surprisingly true to life.  It probably helps to know about football to get some of the jokes but you don't have to know much to get jokes about filling a joint with ball hair and getting someone else to smoke it.  Or jokes like this, when they're trying to convince the guy they always make fun of to abandon his other league:

Andre: Do you guys promise you're going to stop making fun of my sensitive teeth?

Andre: You're not going to keep making the same jokes?

Pete: You mean... that the semen's dissolved away all the enamel?

Kevin: Do they say, "Oh Andre, can we shoot it in the back of your mouth instead of getting it on your teeth?"

Oh, and there's Taco.  Oh, Taco.  Taco's a moron and doesn't give a shit about fantasy football.  He fills the Kramer role on the show, the one guy on the entire show who is completely unrealistic yet nevertheless awesome. Take one episode where Kevin pays Taco (his brother) to dress up like Kevin's daughter's favorite toy and scare the shit out of said daughter so she'll stop playing with that toy because it's annoying him.  Taco dresses up like the toy and tries to scare the little girl but she is happy to see him and wants to play.  What does Taco do?  He shrugs and has the little girl help him rob his brother's house.

Oh, and he sings songs like this (starts about :50 seconds in).

Anyway, The League's on tonight after It's Always Sunny in Philadelphia and you should watch it.  I'm not getting paid for my endorsement or anything, I just think it's funny.