So the Ducks signed defenseman Paul Mara to a discount deal yesterday (1 yr, $750k), which does give them another useful option on defense -- you can see a list of some of these blueliner options in my NBC camp preview thingy yesterday.

Lubomir Visnovsky, Toni Lydman, and Andy Sutton appear safely penciled in the top six, but beyond that it's a mixed bag of possibility.

Toni Lydman’s debut with the Ducks will be delayed indefinitely as the club on Thursday revealed that that he has double vision and will miss the start of training camp.

According to the team, Lydman suffered an acute episode last week and has undergone a battery of tests that have ruled out most major medical concerns but have not identified the source of the problem.

Yikes!  Well, I can only approach this setback the way I approach all hard news: via cartoon. 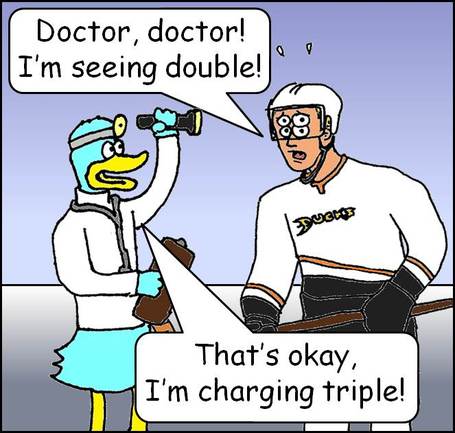 Today the visual gag is better than the punchline.

Anyways, I'm out of town and offline tomorrow and Sunday, but I think I will be going to Monday morning's training camp -- look for the guy in the green shirt yelling "VAYOOOOOO!"  In the meantime, make sure to follow the OC Register, Anaheim Calling, and ALLDUCKS tweets for all the Ducks training camp updates you'll ever need.