Phoenix Coyotes (preseason!) at Anaheim Ducks (preseason!), 7 pm
Go visit Anaheim Calling and Five For Howling to see how ready they are.

I'm not really doing gameday posts for preseason games -- this is just some practice to get me back into season shape.  But indeed -- preseason starts tonight, and the Ducks' site is slated to stream it (if history is any indication, audio only).

The Orange County Register put together these possible line combos for the Ducks:

Anaheim Calling has a great breakdown of what to look listen for from each line combo -- good stuff. 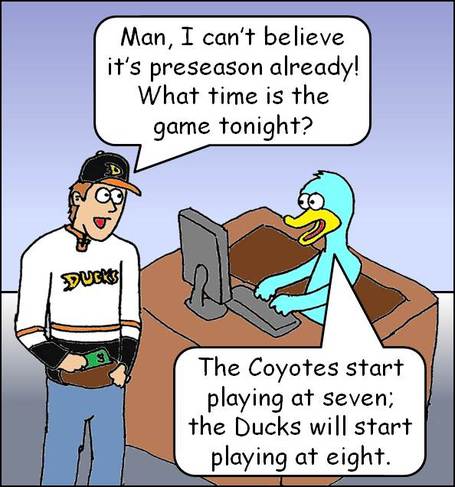 This is supposed to take place at a box office, by the way.
Instead it seems I've drawn a duck working out of a box. :)

I know preseason doesn't matter and that I shouldn't judge results of half-NHL rosters, but it would be pretty encouraging to see hear some improvement in how the Ducks start games -- c'mon first period competence!

Prediction: Ducks 4, Coyotes 2. Goals by Lubo, Smith, Pelly (I guess each surname scores), and (even though he's not playing) VAYOOOOOOOOOOOO.  I'm telling you -- this guy could become my new Pahlsson.