Share All sharing options for: Rambling About Hockey Video Games 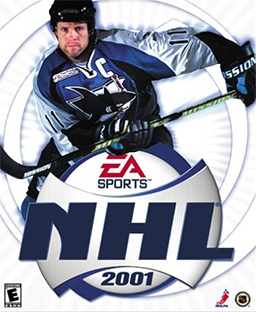 (Warning: this post will basically be me complaining about how I suck at modern NHL video games and how much fun I had with one ten years ago. If you have anything more important to do, like alphabetizing your book collection or checking the batteries in your smoke detectors or performing the job for which you are paid*, then you should probably do that instead.)

NHL 11  comes out today. The demo has been available for a few weeks, and that was reviewed in detail on From the Rink. I'm going back and forth on this damn game, and I don't know if I should get it or not.

I've played the demo a couple of times and to me it's frustrating and boring. I can't do anything on the ice, and I know that it's just because of the learning curve and that if I put in the effort to actually practice the millions of different things you can do it would probably be awesome, but I just don't seem to care enough to do that.

The biggest new features this time are the revamped physics engine (cool I guess), more detailed face-off strategy (okay sure why not) and sticks that sometimes break (oh at last my prayers have been answered!).

Why does everyone skate so damn slow in these games now? I hate it. I guess that's "realism" or something, but in my opinion it's painfully boring. I guess if I buy the game the first thing I do will be to go in to the settings and turn up the speed.

Man, remember the "speed boost" button they used to have in these games? That was the best.

The last NHL game I purchased was NHL 09. The career mode was pretty cool, but I wasn't engaged enough to finish a whole season. Then I stopped playing for a while and wanted to get back in to everything with a fantasy-draft season, and I found that option wasn't in the game. What the hell?

Before '09 I think I had '04 or '05 or something (whichever one had Dany Heatley in his Thrashers jersey on it). But before THAT I had my favorite version ever: NHL 2001.

NHL 2001 had Owen Nolan on the cover. It came out the season after Nolan scored 44 goals and so he was ridiculously over-powered in the game. I played through several seasons of a dynasty with the top-line of Owen Nolan, Vincent Damphousse, and Jeff Friesen. I turned the line changes off and proceeded to score about 20 goals a game with the same two moves - either a one-timer with two players rushing up the ice or a wrap-around from behind the net. I think if I did this now I would get really bored with how easy it was, but at the time I loved the hell out of it.

One of the best things about NHL 2001 for me was that I had the PC version. Now PC sports games can be a mixed bag, but this one was an absolute gold mine. It had all these extra built-in options - most notably the abilities to import your own logos from image files and to customize all of the in-game music with your own music files.

I had an awesome time with the custom teams, drawing my own logos in MS Paint and making my dream team (which was basically the Sharks with Hasek in net) and a team of the dudes I hated (with Roy in net and Forsberg on the top line). I forget what I called my dream team but the bad guys were called the Goats and their logo was a shitty goat face I drew in paint and they wore pink jerseys. They sure did look like fools out there.

Custom music in sports game is one of the best things ever. I loved hearing my favorite songs play for goals or penalties or fights. I went nuts with this feature - I remember buying a "Jock Jams" CD just so I could have the right songs, then editing the files so only the perfect 15 seconds of the song would play**.  Do any modern games have this anymore?

If I can't hear this song when I elbow a guy in the head, then why even do it?

I guess what I'm trying to say is that NHL 2001 was the shit and since then I've never really gotten invested in a hockey game. Am I crazy? Is it totally worth it once you get past the learning curve? That Ultimate Team mode in '11 does seem like something I would really like...

Basically my problem with hockey games, and sports games in general, is this: if they're too easy I get bored, but if they're too hard I tend to find something else to do rather than get better at them. This only seems to happen with sports games - I can lose or die in another type of game a hundred times and it doesn't bother me if I feel like I'm getting better each time, but with sports games if I lose two games in a row I check-out and start playing something else.

I need help, people. Please share your advice, your opinions about NHL 2011, or your remembrances about the good old days in the comments.

** = These days I try to channel my bizarre tendency to put a great deal of work in to things that don't matter at all into more constructive activites, like blogging.