Hey, everybody!  It's finally time to get off my travel-weary ass and start posting again!  And instead of reporting on All-Star shit or Comic Book stuff or anything particularly useful for tonight's game, I thought I'd go back and look over all the games I've missed -- not in any useful fashion there, either, since all I have are boxscores -- but more along the lines of "What was Sleek up to in that southern continent while these games were going on?"

While the Ducks were taking a crap at Staples Center, I was starting my South American tour in Santiago, Chile -- we had a meet-and-greet with our travel group the night before, but this was our first of our many guided tours.  Now I should note -- the vast majority of pictures I'm using for this post weren't taken by me, but rather by our tour director.  It's not that I was camera-less or anything (go iPhone!), but I tend to get distracted from taking photos of major attractions, and instead will take pictures of weird things like stray dogs.

For example, on this opening day we took a trolley up the Funicular Mountain to get a great view of the city of Santiago -- here's a shot that the tour director took:

Smile for me, Santiago.

Meanwhile, I was off studying the sleeping habits of homeless dogs, which are quite common throughout the city.

Who will win this sleeping contest?

The stray dogs in Chile are actually pretty fascinating, as Chileans generally keep them well-fed and don't pester them much, and the dogs in turn seem content to find shady spots and live the lazy life.  It feels a bit bizarre at times but it also adds a nice distraction while walking around the city.

Don't get me wrong here -- Santiago is a pretty cool town; I'm just a sucker for the canine aspect of it.

Wooooooooo!  The Ducks got off to a quick start in this game, and we got off to our own start down in Southern Chile, in the Patagonian area.  A 2-hour flight south brought us to more agricultural regions of Chile, where we explored fish markets and wineries, as well as ran into fellows like this guy: 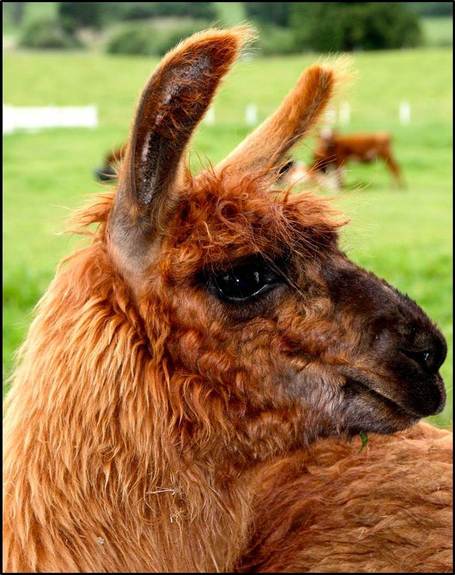 Llama or alpaca?  You decide.

The tour at this point was ready to make its way into Argentina, but rather than just fly over the Andes to get there, we were taking a road-and-lake crossing through the foresty mountains -- apparently where we crossed had the same essential latitude as Oregon, and the nature was fantastic.  There are a couple of glacier-fed lakes that are amazing to boat through, and I spent a lot of time in general awe of the might of the mountains themselves -- incredible. 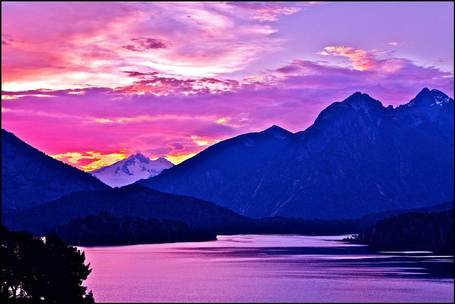 Along the way, we were also introduced to a drink known as the Pisco Sour -- pisco is a type of liquor derived from grapes in an unorthodox way or something, and it's a popular drink in both Chile and Argentina.  It's actually a pretty sweet concoction, but after a few of them your day goes by a lot easier.  The lake crossing and the accompanying hotel stays were definitely a highlight of the trip, plus I even went zip-lining (not pictured)!  Wheee! 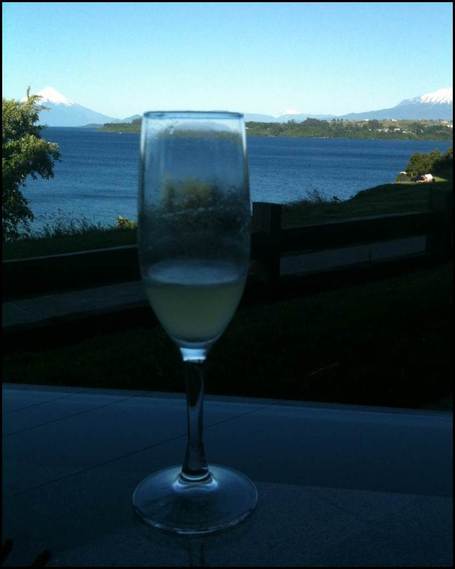 Ah, Pisco Sour, you are too sweet.

Woooooo!  By New Year's Eve, we had finished the lake crossing and were staying at the fabulous Llao Llao (pronounced "Jow Jow") Resort in Argentina.  They were throwing an end-of-the-year gala that was pretty outrageous -- fancy dinner, tango show, dance floor -- there were even rumors that the Dutch royal family was going to attend (though I can't attest that ever happened).  Looking back, I've actually spent very few New Year's Days outside of California, but this was a real blast -- booze was flowing, spirits were high, and even the usual-spoilsport Ducks decided to further solidify the night with a victory over another Prongerless team. 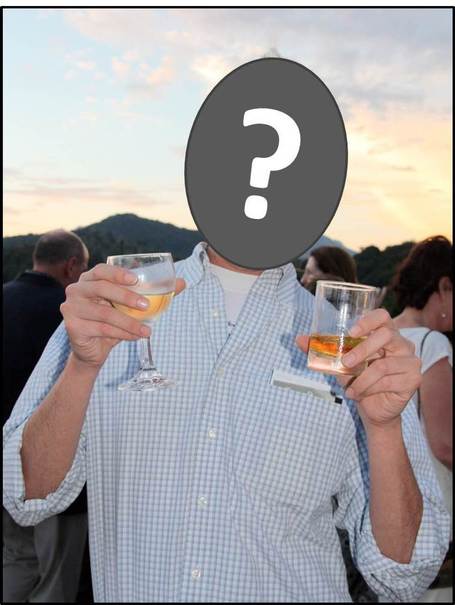 It turned out to be a completely zany night, as my sister and I later managed to find ourselves in a different private party with some random Argentine family with another open bar -- not even sure how that happened.  Memories get a bit vague after that, but I'm pretty sure I owe Llao Llao for one shattered champagne glass -- my bad.  :)

Wooooooo!  The next day we were off to Buenos Aires, another 2-hour flight.  As our local guide told us, Buenos Aires is a city of contrasts -- a sprawling shanty town sits just across the train tracks from a wealthy district where we were staying, and there's plenty of history here, including the somewhat controversial Eva Peron -- apparently everybody in Argentina is either remarkably pro-Evita or anti-Evita -- but she was a fascinating story of governmental transformation, and our local guide did a great job of offering both perspectives. 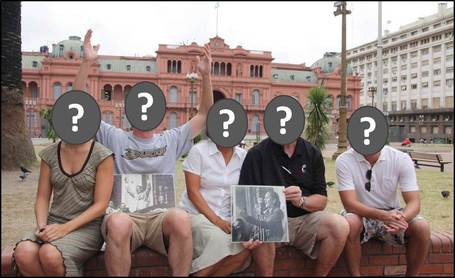 The entire Sleek family in front of the Pink House in Buenos Aires -- I'm channeling my inner Peron.

There are much fewer stray dogs in Buenos Aires compared to Santiago, but there was still plenty to see as we made our way through different parts of the city.  And we certainly had our opportunity to change our focus from Chile's excellent seafood (try the reineta -- it's delicious!) to Argentina's excellent beef.  Mmmmmm: 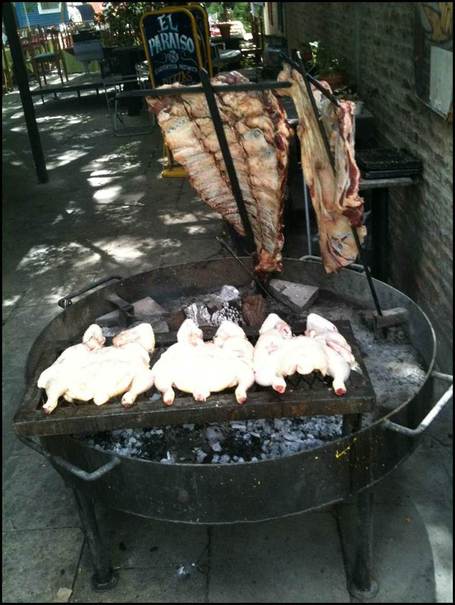 After two days within Buenos Aires, with plenty of touring, shopping, eating, and tango shows, we went outside the city to a gaucho farm to get a taste of Argentine country life (you can see gauchos playing musical chairs here).  This was a great break from all the city touring, and they fed us really well plus gave us a little horseback time, too. 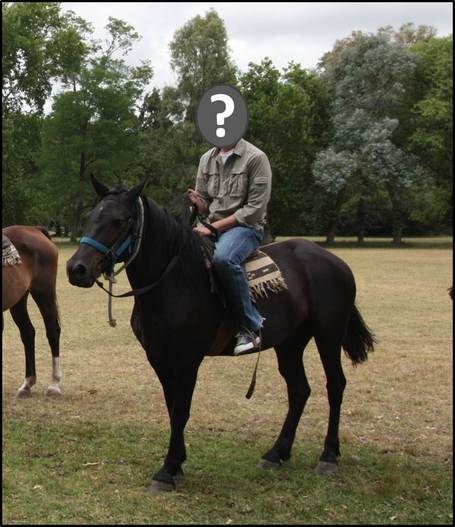 Look at me!  I'm a sloucho gaucho!

Ducks may have lost this game, but I was still a winner, because this was around the time we were kicking it at Iguazu Falls.  You can take your Niagara or your Victoria or any other fantastic waterfall and it feels pretty pithy compared to the 275 waterfalls that make up Iguazu -- and especially on the Argentina side, they offer plenty of bridge paths that can take you up really close: 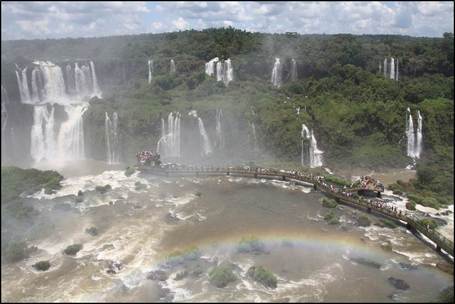 Nothing feels better on a hot muggy day than the Iguazu spray -- plus it's just awesome to behold.

This was pretty handily the highlight of the trip in my eyes, though the day we went was during the Argentina summer break, so the park was way crowded.  Still, even with the Disneyland-style crowds and lines, the falls were impressive as fuck.  The falls sit on the border between Argentina and Brazil, and we visited both sides -- as our local guide told us, the Argentine side takes you up close so that you can be in a painting; the Brazilian side offers a much wider view of the painting itself.  Either way, it's breathtaking. 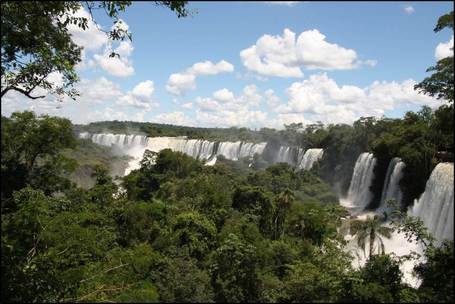 Another shot of the awesomeness.

We even took a boat trip down in the river below the falls, where we were each provided a bag for our shoes and cameras -- the boat tour got us completely drenched, but that was pretty awesome, too.  From nearly any perspective, the power and scope of these falls can take your mind off of any Ducks loss.  Especially when it's followed by...

Rio!  Wooooooo!!!  Our last two-hour flight took us to Rio de Janeiro, where we totally lucked out on the weather.  Apparently their summer season is also their rainy season, and it had been raining for a week straight before we arrived (and I heard it picked up again after we left).  But for our last few days of the tour, it was nothing but sunshine.  The beaches in Rio are amazingly sprawled yet amazingly packed -- the city has too much of a good thing, much like that Ducks game.  We also caught the main sights, as well: 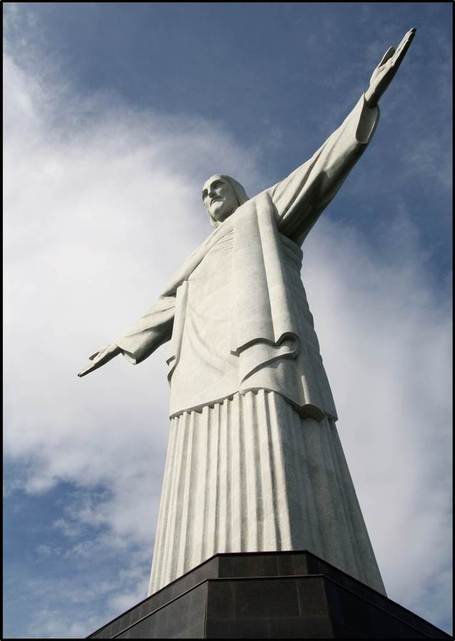 We had plenty of drinking opportunities in Rio, too, as our tour was winding down to its farewell.  One of the featured Brazilian drinks was a concoction called a caipirinha, which is a lime-and-sugar mix with another local liquor -- it too is pretty sweet, and can be made in a variety of forms, including one made with vodka and cashews (well, that's what was translated for us, but these were too huge to really be cashews) which went down way too smoothly.

We were given plenty of time in Rio to explore it on our own, but we also got taken to the place where they were preparing floats and dances for the upcoming Carnival celebration -- there we got a short lesson in samba dancing, and my tour group would be pretty disappointed if I didn't include this picture: 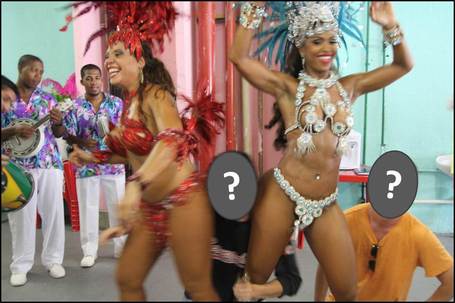 My brother and I got recruited to go cheek-to-cheek with some samba dancers.

All in all, it was an excellent tour -- we got lucky in certain respects (the weather was constantly fabulous, the other members of the tour group were all pretty fun to hang out with, and the liquor never stopped pouring), and generally it was an excellently-run tour -- sometimes it was fast-paced, sometimes it was slow, but I think we accomplished a good deal over the two weeks or so, and it was never "not fun" at all.  I still can't pick a favorite country out of the three we visited, and that's a good thing.

The flight home, though, was another story -- thanks to mileage-bought tickets, we took a roundabout way back home through Miami, Dallas, and John Wayne that essentially put us behind airport security for nearly 24 hours.  Still, nothing like news of a blowout Ducks victory to help ease that travel pain, plus it sort of disoriented us enough to get back into the right time zone (Santiago is shockingly five hours different from San Diego).  I'm still a little warped -- I was up terribly early this morning and thanks to all the eating we did on the trip, I'm regularly hungry -- but I can't complain at all.  Go South America!

Plus I made it back home in time to watch this game, too...

Wooooooo!  Back home on the couch watching and commenting like old times; that's a nice way to get back into hockey again.  Go Hiller!

Anyways, that's the general gist of the tour I took and some of the sights I saw.  Feel free to ask any questions, tell me how jealous you are, talk about all the hockey news I'm ignoring, or lament at how much you already miss Spade's gameday previews (thanks again, man -- you're a lifesaver!).  Even though it was an awesome trip, I'm glad to be back, and soon enough I'll be properly reunited with the scanner once again -- you'll have to wait one more game for some cartoon silliness.  :)

Prediction: Is tonight's game really on Fox Sports West?  Awesome -- I can watch it from my hotel room, then, so I'll be around for tonight's comments.  As I noted before, the Ducks are 17-6-1 with the Pep Boys in the lineup, so Ducks 4, Blues 2.  Goals by Stray Dog, Pisco Sour, Iguazu Falls, and Llao Llao.