Greetings, BOCers! It is I, the Shark Guardian! The Savior of San Jose, the Many-Toothed Defender, the Tech-Dude with Attitude...whatever you may call me, my duty is to defend the city and people of San Jose from any and all threats - and right now I am needed more than ever!

Following the San Jose Sharks' recent third-period collapse against the Toronto Maple Leafs, coach Todd McLellan attempted to contact me for assistance through the use of the Shark Signal. Unfortunately, since I spend most of my time underwater and the Shark Signal is up in the sky and stuff, I didn't get his summons. But then last night he called me on my cell, so everything's good now. I'm here to help, citizens!

My Aquatic Danger Sense is warning me that the Sharks may be in big trouble. They're in the midst of a terrible losing streak, they can't score more than a goal or two a game at most, and they've suffered some key injuries that are making it difficult to right the ship. At this point in the season they need to be consistently trending up in order to improve playoff positioning, while instead they are currently out of the playoff picture.

This shall not stand! The Gilled Guardian will not allow it! San Jose shall triumph!

I pledge to lend every ounce of my technological and sharkological expertise to Doug Wilson, Todd McLellan, and the rest of the Sharks management and coaching staff in an effort to get the Sharks back on their feet - metaphorically speaking, of course. And if some problem comes along that can be solved by a horde of telepathically-controlled sharks, then I'll take care of that as well.

And as for Colton Orr, the renegade who came this close to ending Logan Couture's season...I have a very special vengeance in mind for him. It involves a sealed chamber slowly filling with water...and hundreds of ravenous sharks. To be honest, I got the idea from that movie The Cell, then just added the ravenous sharks because I always like plans better when they involve ravenous sharks. Colton Orr will pay!

Tonight the peaceful city of San Jose will be invaded by the filthy Oilers and their own Defender. Just look at this foul monstrosity: 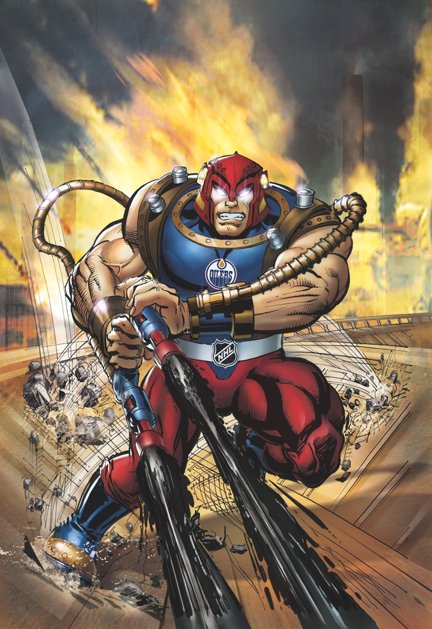 We Defenders are supposed to be champions of good, but this guy is CLEARLY a villain. He even sort of looks like Juggernaut! And where in the name of Gary Bettman does he get off spraying oil all over everything? Doesn't he know how harmful that stuff is? Hasn't he ever heard of the Gulf Oil Spill? This guy is just totally crude!

I will not allow San Jose to suffer defeat by the Oilers or their Captain Planet-villain "Guardian." I stand on the side of good, the side of the Sharks and their fans, and together we will be victorious!

Prediction: The Oiler Guardian sprays a bunch of oil around, causing car crashes and polluting the water. The Shark and the Oiler begin to fight, but the Oiler is stronger and gets the upper hand - so the Shark bites out the dude's throat and lets him bleed to death, because that's what a Shark does, damn it.

Also the Sharks win 3-1 with goals from Marleau, Boyle, and Clowe.