Share All sharing options for: Ducks Gameday -- Why I Ottawa...

Sleek the world traveler finds himself back in Vegas again!  You know what that means, Kevin Y: 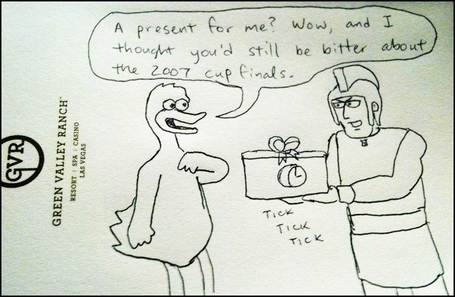 Thanks again for being such pushovers, Senators!

Since I've been back in the northern hemisphere, I've been pretty light on hockey content, so I thought today I'd create a spreadsheet of Ducks scorers that could be sliced up by date or opponent.  I don't know that there's anything too revealing in the various slices of data, but it did enable me to come up with a three-question quiz for Ducks fans -- just to see if you've been paying attention:

Q1. Who has been the Ducks' leading scorer since Christmas?

Q2. Who leads the Ducks in road penalty minutes?

Q3. Who leads the Ducks in goals scored against Eastern Conference opponents?

Feel free to take your guesses or just read on for the answers:

Q1. Who has been the Ducks' leading scorer since Christmas?

This was the main spreadsheet slice that I wanted to look at, as it covers a lot of the games I never got to watch.  But it does show how the team has survived so valiantly since Getzlaf's injury departure.  Lubo does lead the team in points over the past ten (whattaguy), but it's a tight race -- eleven Ducks are at half-a-point-per-game or better over the past ten games, and that balance is definitely good to see.

Interesting to see that Bobby Ryan, the top goal-scorer over the past ten, and linemate Corey Perry are both -2 since Christmas -- and the Lilja-Fowler pairing has been bleeding even-strength goals-against, too.  Even so, there's been enough positive contributors, including the suddenly-wicked power play, to overcome these issues.

Q2. Who leads the Ducks in road penalty minutes?

A2. Corey Perry by a very narrow margin.

Top Ducks Scorers on the Road

George Parros' one road goal doesn't allow him to make this list, but he has 64 penalty minutes in 22 road games, two less than the Ducks' top scorer Perry.  Perry's an interesting split -- I can't fully tell you why, but he has 66 penalty minutes and 25 points in road games, compared to only 16 penalty minutes and 24 points in home games.  For some reason, Perry leaves his discipline at home when he travels, but it's tough to tell you that it's a bad thing -- he has more road goals than the next two Ducks combined.

What's also striking about this road table is the plus-minus column.  Pretty much every player not named Lydman is a road "minus", even the team's best scorers.  It's a big concern, especially as the Ducks play a bunch of road games this coming month, but wow -- Toni Lydman is awesome, isn't he?  He's the top plus-minus guy for the Ducks on all three of these data tables.  It's not a terrible choice to call Jonas Hiller the Ducks' MVP, but I'm still on Team Toni -- however this guy manages to stay "plus" in any circumstance, it's incredibly valuable for Anaheim.

Q3. Who leads the Ducks in goals scored against Eastern Conference opponents?

A3. Wouldn't you know it?  Ryan Fucking Getzlaf.

It's obviously a pretty small sample, but Getzlaf for some reason is quite the sniper against eastern goalies -- 8 goals in 12 games is a shocking number for pass-first Baldy in nearly any circumstance.  And yet there it is -- he's leading this category rather handily, though many Ducks have done well against the east this season.

Check out the plus-minus column in this table -- pretty much everybody is a positive contributor against the eastern conference.  And still Lydman leads them all.

I don't know that this exercise in data slicing has been too valuable, but there have been a few interesting tidbits of information, and some of the overall trends have been a bit revealing -- Ducks need to improve on the road, but perhaps their next three road games against eastern conference opponents can help with that.

Ottawa in particular seems to be a beatable opponent -- they've won only 1 of their last 9 games, a win against the Islanders -- and they currently sit below the Maple Leafs in the standings.  That does scare me, though -- Ducks tend to play terrible against less-scary opponents.

I don't know what my story is for game comments tonight -- I won't get back to the hotel in time for puck drop, and will probably try to watch some of the game over in the casino's sports betting area, but I'm not sure how well that's going to work out.  We shall see.