Ducks Gameday: Hudson Blackhawk and Duckie 2-tone..would you rather be a Maxim?

Share All sharing options for: Ducks Gameday: Hudson Blackhawk and Duckie 2-tone..would you rather be a Maxim? 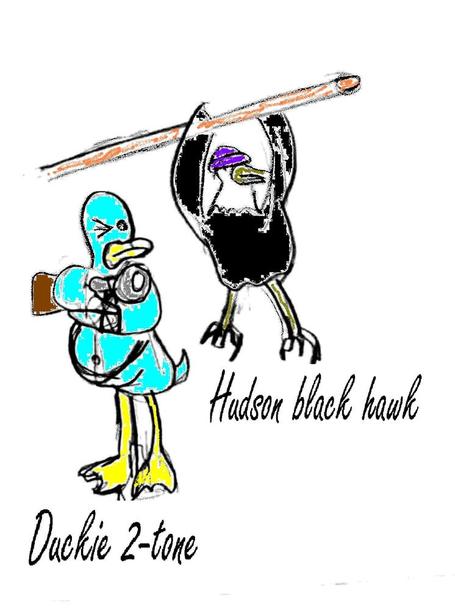 suppose to be the plunger bomb things they were shooting in the movie..didnt come out right

before I get to my original post I need to talk about los patos....Im not sure what gorilla head said or did (maybe spanked them with a wire hanger like my mom used to do to me)to all his players..but they've won 2 straight. Most importantly though they have won it playing there identity In my temporary author's opinion. The ducks are built to win games 5-2, 6-4, 4-3 etc..with there shitty back end..they need to keep constant pressure by forechecking hard and creating turnovers keeping the puck out of the carnival zone that is the ducks dzone...the big line uses there long reach to intercept passes and bang fuckers into the boards the 2nd line uses there speed to get right on top of Dmen..and the 3rd and 4th outhussling..sitting on leads does not work for this team as they dont have the defensive talent to hold leads..now the ducks were attemping to do this in the begining of the season and where creating turnovers etc...but were either a)unlucky..lots of posts and blocked shots or b) stupid and overpassing...so then it appeared they tried going in a more defensive gameplan and then took a freefall..so it appears were back to more aggressive approach and it has paid off..as the ducks are starting to see some of those shots finally go in and maybe carlye drilled it in there head to stop being so cute...a perfect example was yesterday when bobby picked up the turned overed puck instead of looking to make a pass he shot first and scored a beauty..if the ducks can stick to this identity and accept that there a below average defensive team and keep the pedal on the gas at all times...utilize there 3rd and 4th lines to keep everyone fresh(lupul has helped tremedously with this)..we can get back on a streak and then who knows right?....

and it looks like the new aquire link here Maxim Lapierre will be centering Lupul and brandon mcmuffin on the 3rd line for tommorows game wearing lupuls/kunitz old #14...all I hear about this guy is that hes a big dick and perry will have a new friend....he scored 15 goals a season once...so he should fit right in here...more maxim info here ..so lets welcome him here and hope he adds some spark to the bottom six like lupes has 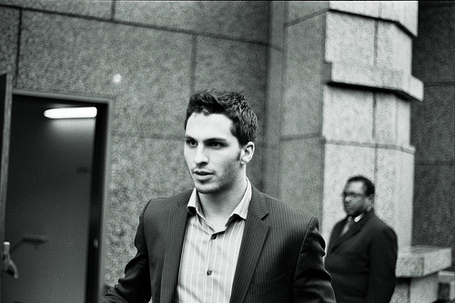 hey he doesnt look so bad? (i imagine this is what meg looks like...ill find out on the 9th)

Famous "bird burglar" Hudson Black Hawk is released from Sing Sing once again and meets up with Duckie 2 tone. They are blackmailed this time by Mr. Easse. Cosse to steal the presidents trophy from the Verizon Center..
Hudson Black Hawk & Duckie 2 tone break into the Verizon center and hawk jabs at duckies fat waste line..Duckie informs hawk he still wears his girdle
Hawk: Ok Duckie 31 secs to break in , 1 min to compromise the alarm, 30 secs to steal the item, 30 secs to get the hell out of there
Duckie: 2 mins 31 secs….swinging on a star?

Would you like to swing on a star
Carry moonbeams home in a jar
And be better off than you are
Or would you rather be a Shark?

A Shark is a fish with a long funny snout
The regular season is what there about
There back is brawny and there brain is weak
He's just plain stupid with a stubborn streak
And by the way, if you like to fart
You may grow up to be a shark

Or would you like to swing on a star
Carry moonbeams home in a jar
And be better off than you are
Or would you rather be a King?

A King won't do anything, but suck on the ice
Quick will lose the vezina to Carey price
To fool the the LA fans is his only thought
And though there talented, It’s all for naught
But if you’re the sort of fan that likes a fling?
You may grow up to be a King

Or would you like to swing on a star
Carry moonbeams home in a jar
And be better off than you are
Or would you rather be a rudy?

ducks win there 3rd straight...spade sees the whole game against chicago this time instead of passing out in the 2nd period...5-4 ...goals by the rat, brandon mcmuffin, Maxim, lupul, ryan da centre and hudson blackhawk gets sent back to sing sing and duckie 2-tone escapes and laughs

p.s. an oldie I did awhile back for good luck

the og swinging on a star..I couldnt find an instrumental so u could play the music along with reading..but it will give u an idea