Burkie, Jiggy, Frenchie, and Brownie (suspended).  A trip to Toronto is a trip down Ducks Memory Lane -- and heck, throw in a sprinkling of Francois Allaire and Ron Wilson, too. 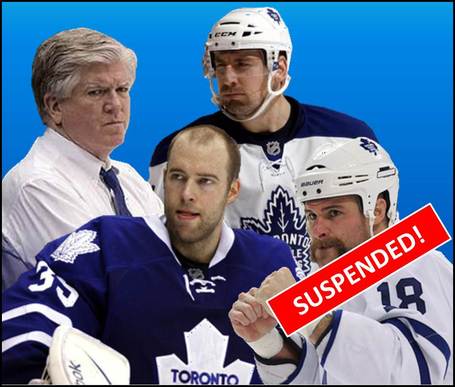 These guys used to be soooooo cool.

For the most part, they're great memories, too.  Burkie brought us Scotty Niedermayer, Chris Pronger, and even the rebirth of Teemu Selanne, plus he was regularly entertaining as a blowhard GM.  Jiggy brought us to the cup finals and later sealed the deal with a cup win -- when games mattered most, he turned our ties into wins.  Frenchie punched out Iginla, knocked out Brunette, and provided cheap and reliable minutes alongside Niedermayer.  And Brownie knocked Jiri Hudler all the way to the KHL and back.  Allaire produced constantly excellent goaltending, and Wilson led us to our first postseason series win -- everybody's got a good story to tell... from Anaheim.

In Toronto, of course, it's been a different story for them, I think -- Burke went to a city where he could spend more money but had less young talent to start with in the cupboard; he's made big moves but spent a lot of assets doing so.  Jiggy was on a sharp decline in Anaheim before Burkie brought him aboard -- he's steadied somewhat but hasn't been the superstar of old.  Frenchie is still a solid minute-eater, just not at his old price tag.  And Brownie is still Brownie -- never hard to root for that guy, but he still has to be played carefully.

In some respects, you'd think all this former-Duck hoarding would make me somewhat of a Maple Leafs fan, but I dunno -- mostly I'm just glad these guys played or worked for Anaheim when they did.  Ducks fans, feel free to share your favorite memory from any of them in the comments.

When I first became a Mighty Ducks fan in the late 90s, I used to get a lot of shit about how un-scary a duck was in nature -- how was anybody supposed to be scared of a duck?  But c'mon, I'd reason, isn't a duck like a thousand times more threatening than a maple leaf? 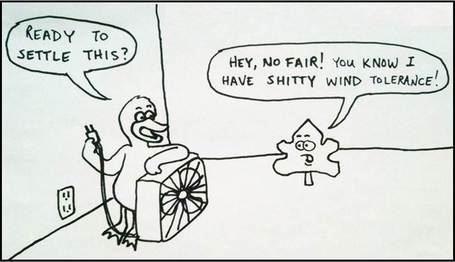 Drawn with a sharpie, photographed with an iPhone.  Go Vegas cartooning solutions!

At any rate, I'll be flying home today and should make it just around puck drop -- feel free to stop by for game comments, even if you're trendy enough to root for the Blackhawks (and sure, SCHers, feel free to share your favorite Versteeg memory).  :)

Prediction: The Leafs have already earned regulation victories against the Sharks and the Kings this season, and they did represent one of the most gut-punching losses Anaheim suffered last season.  Plus they're coming off of a 7-0 beating at the hand of the New York Gaboriks last night -- they'll be playing for revenge tonight.  Meanwhile the Ducks are playing shitty hockey but winning anyways -- we'll probably leave Hiller on his own tonight.  Leafs 4, Ducks 2.  Goals by Beauchemin, Giguere, Burke, and Giguere.