Setoguchi's Revenge is now leading our league, ladies and gents.

LVP: Who the heck is Michael Frolik? I mean, aside from a lousy hockey player.

LVP: Andrew Ladd had one goal, but was a minus seven. SEVEN!!!!

Spade was close to victory, only one shot and a couple of power play points behind the Anzeholics, but he couldn't quite get there.

Sleek and Destroy vs. MEEEEEEEEEEAAAAAAAAT

MVP: Scott Gomez is apparently still playing, and got four assists this week.

LVP: Least Valuable Player has to go to Braydon Coburn: no points and a minus four.

McSorley's Stick got such an awesome week from his players that he won despite not setting up his team. Tough break for the Teal Blades.

LVP: Tukka Rask had a GAA of 9.00. That's not how you steal the starting job from Tim Thomas, Tukka.

LVP: Marian Hossa is a superstar of getting zero points and a minus three.

Nothing to see here. Just a boring tie. Move along.

MVP: Johan Franzen and Henrik Zetterberg both had solid weeks.

BROWS won the goalie categories with a 3.46 and an .890 save percentage.

MVP: Shane Doan had five goals. I hate that guy. 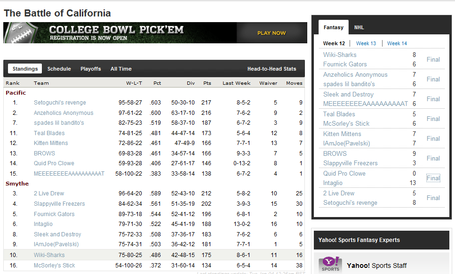