(For specifically Sharks-related content, skip to the end of the post. You probably can't be bothered to read anything else, right? I know you're sooooo busy and everything, Mr. President.)

Despite what some joyless old fogeys might say, the NHL Guardian Project is totally rad.

Don't believe me? Well I've taken the time to construct a mathematical proof of the Project's greatness. It goes as follows:

Cool + Awesome = RADICAL TO THE MAX!

Sorry I had to be so brutal, but you people deserve to know the truth.

When I was in middle school I spent a great deal of time one summer coming up with what powers NHL-themed superheroes would have. If the NHL Guardian Project had come out at that time my parents would STILL be scraping my brains off the wall after my mind was blown to pieces.

Sure it's cheesy, but since when has hockey been above cheesy? Goal songs are cheesy. Organs in arenas are cheesy. Our league has a team named "The Wild," for crying out loud. The Guardian Project is part of promoting the NHL All Star game, which is all about doing stupid stuff the fans enjoy: the best players in the league play a meaningless game, the captains will pick their teams like they're kids playing pick-up hockey, and everybody will see who can shoot the hardest and skate the fastest. And we're going to turn up our noses at some cartoon superheroes named after our teams?

The Project has unveiled five of the Guardians so far. You can see them in the photo gallery here. In the spirit of the project, I'm going to flash back to my middle-school self and review each of the five Guardians revealed so far, in terms of how well they capture the spirit of the city and team and how good they are as a superhero. I'll also include a description of what my version of the Guardian would be like (which I shall refer to nerdily as the Megaverse version of the hero). 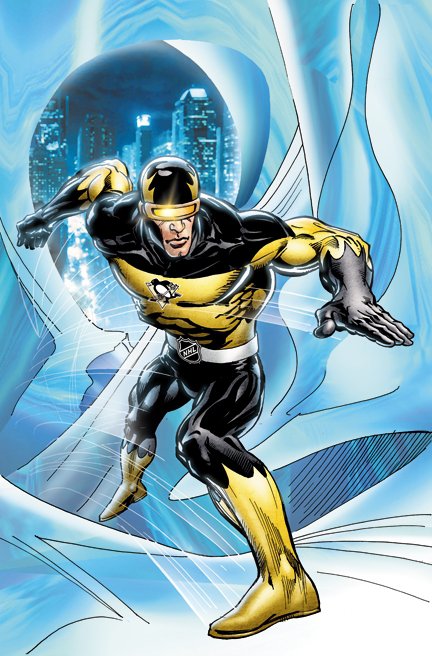 Description: "The gritty young hero of the Steel City. Can project ice missiles from his hands and travels on a frozen ice sheet."

Powers: The aforementioned ice-related stuff. Super maneuverability. Magnetized suit. And probably some kind of Cyclops-type eye beams I would assume from the picture, but it doesn't mention those anywhere.

Grade: C. It's cold in Pittsburgh (and wherever penguins live), so all the ice stuff works perfectly. He loses a lot of points for the magnetized suit though. Is that even a good idea? I get that it's releated to the "Steel City" nickname and everything, but what exactly would this magnetized suit do, aside from attract bullets and stray knives and stuff?

Also, what's with the Cyclops head? Neither the YouTube video or the picture mentions anything about eye-beams, so is that just a really stupid mask? And if he does have eye-beams, then why does he also need to shoot ice missiles? I don't like it when superheroes have redundant or counterproductive powers.

Megaverse Penguin: A hulking Colossus-type man made of steel whose hands are super-chilled and can project freeze rays. His catch phrase is "You'd better put some ice on that!" 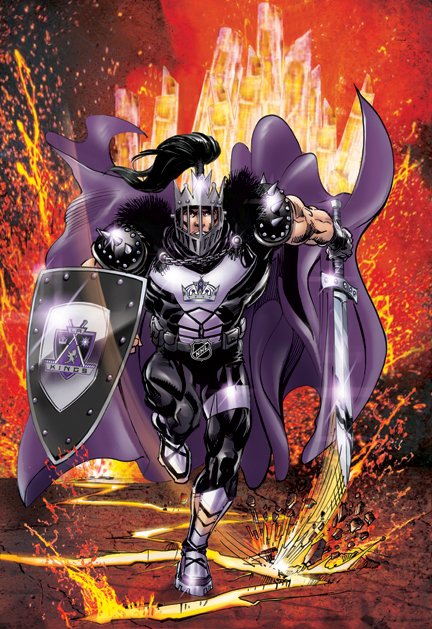 Description: "A regal ambassador of the City of Angels. Has a shield that creates force fields and a sword that causes earthquakes."

Grade: A. I'm so damn jealous that the Kings already have their Guardian, and that he is totally awesome. I just know the stupid Shark one is going to be some Aquaman loser who will be way worse than this. The King can kill you if you're far away with his earthquake sword, and if you try to get in close you'll get a super-strong sword slash in the face. Plus you'll never hurt him, since he has a force field shield, a helmet, AND accelerated healing. The only problem with the King might be the Superman factor of being SO awesome that other Guardians are irrelevant.

Los Angeles is a better city than pretty much any other city in the world, so it makes sense they would have a hero that is totally sweet.

Oh yeah - and the King is black. Black super heroes are always cooler. I don't know if Stan Lee and his team of comic geniuses made the King black because of Wayne Simmonds* or not, but either way it earns a bunch of extra points. The King will be the Guardian to beat.

Megaverse King: My King is a mind-controlling magnificent bastard who constantly straddles the line between hero and villain. His ultimate goal is world domination, but he plans on being a benevolent dictator. His catch phrase is "I am your king!" 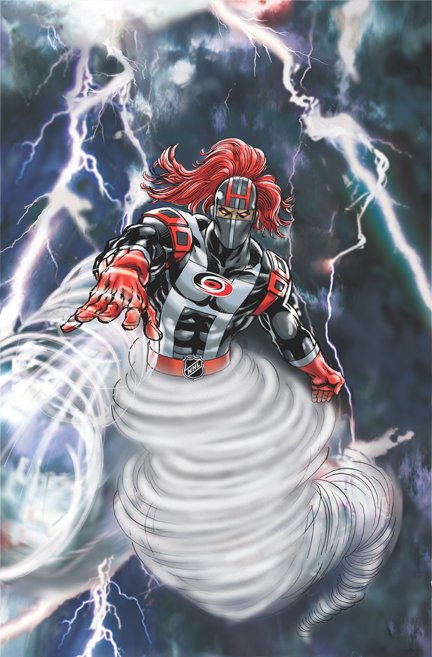 Description: "A barometric nightmare with a personality as wild as the weather patterns he commands."

Grade: D. Environmental empathy? What the hell is that? So he can't exactly control the environment, but he really understands how it feels? And "barometric implosion"? Nothing in a hurricane implodes, as far as I know. I feel like they had the B-team of writers working on this guy, and they just took a bunch of random weather-related words and attached them to things that sort of sound like super powers. Look, I can do that too: Precipitation beams! Humidity rage! Fog punch!**

It's a real shame the Hurricane sucks so bad, seeing as how the All Star game is going to be in Carolina and everything. Sorry guys. If "having a stupid costume" was a power, the Hurricane would be like a million Supermans.

Megaverse Hurricane: To better capture the spirit of the city, my Hurricane is a down-and-out bare-knuckle boxer living in North Carolina in 1903. He desperately needs money, so volunteers to be a test pilot for the Wright Brothers. While flying in a glider at Kitty Hawk, a freak storm sucks the man up, transporting him through time to the present day and granting him the powers of flight and super speed. His catchphrase is "Dry up, you hooligan, or I'll give ya a real sockdologer***!" 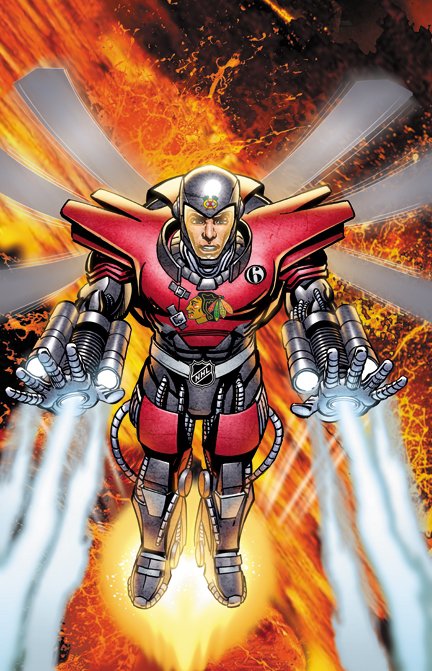 Description: "Big shouldered friend of the Windy City. Controls the element of wind."

Grade: B+. This is pretty good, aside from the obvious "elemental empathy" blunder. Somebody over at the NHL Guardian Project needs to check the definition of "empathy."

But regardless, this sort of Iron Man/helicopter guy does a great job combining Chicago's "Windy City" nickname with the idea of a Blackhawk helicopter. Concussion cannons are pretty awesome, and if there was a real fight going down I think I would want this dude on my side.

It's a little unfortunate that "Controls the element of wind" sounds like it's talking about farting. Still, it was a good choice for the Chicago Guardian.

Megaverse Blackhawk: If comics have taught me anything, it's that if a guy has "Black" in his name then he needs to be African American. So my guy is basically Samuel L. Jackson with giant hawk wings and a fireman's axe. He can control the wind too because, hey, why not? His catchphrase is "Blow me!" 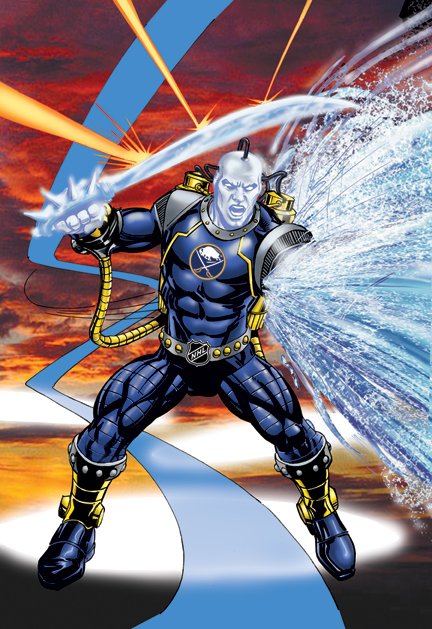 Description: "A human hydroelectric plant. Manipulates water in all its forms from liquid, solid, and gaseous."

Grade: C-. I'm a little underwhelmed by this guy, especially because "The Sabre" is such an awesome name for a hero that I feel like this was a huge missed opportunity. They gave him a bunch of powers that seem to conflict with each other and only make sense in connection to Niagra Falls and hydroelectric power, which is pretty damn geeky even in the world of hockey-themed superheroes.

The water stuff also seems to run counter to the idea of a sword, so it's just confusing. If this guy has a hydro suit then I assume he goes under water a lot? What the hell good would a sword be down there?

This feels like a failed combination of a sword-themed hero and some kind of elemental guy, and overall seems a little jumbled and dumb.

Megaverse Sabre: A mild-mannered hockey goalie named Ryan Miller discovers a magical sword that has fallen from the heavens. When he holds it he becomes the Sabre, a fearless warrior with superior combat skills. He has a Bat Cave-style base hidden in Niagara Falls. His catch phrase is "Cut it out!"

That's all for now, folks. I hope that in reading this you were able to understand a little bit more about the childish glee that the NHL Guardian Project is bringing into my life.

If you read Working the Corners (which you really should, if you're a Sharks fan) then you already know how pissed off Ryane Clowe was after the last game. Clowe's one of the leaders on the Sharks and seems to be the one most inclined to get pissed off and call people out for poor play. That's good. That needs to happen, sometimes. Patrick Marleau certainly never did that (I'd be shocked if he ever said a word in the locker room. I think he just sits silently with his eyes darting around like a cat watching a fly.). Joe Thornton is all about encouragement and positive attitude, which is great, but I don't really see him yelling at a guy when he screws up. The team needs someone to fill that role, and it seems like Ryane Clowe is ready to do it. I salute him for it.

Clowe is right to view the performance against Vancouver as disappointing, despite the closeness of the score. The well-rested Sharks got outworked yet again by a team that was playing back-to-back games. The Sharks were drastically out-shot, which was really rare earlier in the season but has recently become more frequent. At times this season it has felt like the Sharks just can't do everything they need to do correctly at the same time. When they're shooting and scoring a lot, they play crappy defense. When they focus on defense, their offense suffers. Rarely it all does seem to click, and then in the next game they just play like a bunch of fools.

In more positive news, Logan Couture was rightly named the NHL rookie of the month for December. Regardless of the possible salary consequences or whatever, I want Logan to win the Calder. He's awesome and he deserves it.

* = am I being racist? Is it racist to think that maybe they made him black because the Kings have one of like five black players in the league on their team? Sorry everyone.