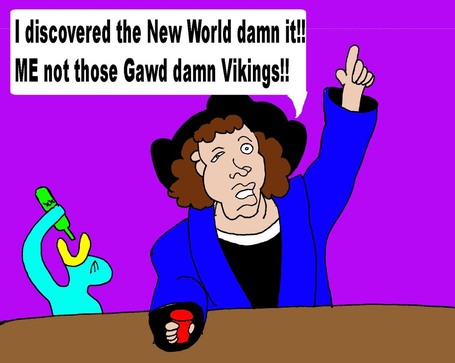 before we get to todays game (say hi to sleek and check out guachos!)and topic lets talk about the last one...frustration....we got hiller-ed and it was a drag...pikke fart out of my ass renne was good or just so fuckin big he coverd the whole gawd damn net ..and gobbled up everything...the ducks actually played decent in this game firing off 41 shots. The ducks were really unlucky in this game hitting posts..or rebounds slighty out of the reach of forwards..and the preds goals came on a deflection and a video overturn. Just one of those games i guess against a great defensive team and good coach and Ill try not to overreact. (me making fun of trotz probally didnt help). Maxim or "magazine" in his first game starting off shitty by letting his man get away to pass to set up the 2nd goal I beleive but came on strong later in the game and even got time on the top line and looking like kunitz with his 14 and his crashing the net style of play. I wouldnt be shocked if he got a closer look up there. Belesky is serviceable up on the top line but seeing maxim up there you can tell he makes things happen..somthing that belesky will some day achieve hopefully. Ryan isnt too shabby at winning faceoffs either..bottom line ducks could have won this game with a little more luck and less turnovers..

I don't like tonites matchup at all...this should be the game not having getzlaf will really hurt us with nash coming in...not that getzlaf matches up that great with nash..its just that no one else on the ducks roster even comes close...this could get ugly unless gorilla head comes up with some plan

moving on I hate the columbus blue jackets for one simple reason...the "columbus" in the name.(although "blue jackets part is stupid too but doesnt bring on hate) The truth is starting to come out about that portiguise piece of shit and I was gonna write a rant about it but I can't articulate for shit as you all know so I employed a little help from jewells from the crown author-hot mamma piece of ass-manhater* whom I love dearly Miss Niesy (miss right?)..Ill add some commentary of my own in italics.have a read..after the jump anyways

Columbus wanted to make the people he "discovered" Christians, but also slaves. He stole their land and their homes. Though by Columbus' own account the local Taino Arawaks were generous and friendly, he immediately planned on returning to conquer them all. He left some men behind to found a colony, and went back to report the news.

oops...somtimes it doesnt pay to be nice...maybe thats why rudy is such an ass its a survival technique

While he was away, the men of the settlement had made themselves so hated by their rape and pillaging that the inhabitants had risen up and wiped them out. When Columbus returned, he made sure to hunt the 'guilty' ones down to murder them in turn, and proceeded to subjugate the rest, also exploring Jamaica and the coast of Cuba. If any resisted -- as you might expect -- they were killed. But at least some of their souls were saved! How awesome for them.

Aren't Europeans so enlightened and generous?
who knew people didnt like to be raped and pillaged?

Another aspect of Columbus that gets way too much play is the notion that he was out to explore for the good of science, to prove the world was round. Many others had already theorized that. He just wanted a direct route to the Indies (Asia) because that would be a good way to get really fucking rich. But he didn't find the Indies, and they wouldn't have lasted that long on their dinky ships even if other continents weren't in his way. He had severely underestimated the circumference of the Earth.

For a long time, though, he still thought he had landed on some uncharted islands near China or Japan. So he called the people "Indians." Dumbass.

I wonder were the similar reference "engines" came from?

His various expeditions were backed by Spanish bankers and King and Queen of Spain. He was to get a 10% cut of the profits. Needless to say, everyone needed a return on their investment, so Columbus forced the native people to bring him tribute or he'd kill them or cut off their limbs. He was convinced that the island (modern day Haiti/Dominican Republic) was chock full of gold. It wasn't. He demanded it anyway.

On his second expedition, the 'invasion' force with 17 ships, he packed 500 of them up and sent them back to Spain -- he suggested to Queen Isabella that they be sold to recoup some money. On his third expedition, he reached South America proper.

I think I read most of the 500 died...Im sure it wasnt cuz of the first class lodging and service they had on these wooden ships...it must have been one of those mass suicide things..ya thats it!

Of course, the conquistadors that followed in his wake were also brutal, bringing mass murder, rape, and pillage to a greater part of the "New World." The vast majority of indigenous peoples were wiped out. Disease was the biggest factor -- some give estimates that more than 70% died. But the Pope issued an edict making the subjugation of the inhabitants wonderful and everything. Non-Christian barbarians weren't really people: they were to convert instantly or be destroyed, even if they didn't understand what they were being told. All of the lands were Spain's rightful property. It must be God's work.

This is true...I researched world holidays and good percentage of them is "idependence day" from you guessed it Spain!

Later, the colonialists needed more people to farm their newly stolen land. So they shipped more and more slaves from West Africa to keep up with the labor demand. That's right, more slavery. It's a story that gets even more depressing as it goes along.

So we see now why it is vital to celebrate Columbus. He was the first colonialist bastard, and the first slaver of the New World. And millions of people died, because he "discovered" these lands by accident while on a venture capitalist jaunt. He was not even the first European to sail to the New World, since Vikings had set up failed colonies hundreds of years earlier in Greenland and Newfoundland. But we have honored him with a federal holiday since 1971, because we love revisionist history, and because we are stupid.

At least he caught malaria. Yaaay.
hey it ties into my cartoon beautifllly!!

thanks niesy for the help your one of my favorite people in the world kinda like mic jagger!

Ducks win to avenge the Tiano People..the city of Columbus comes to there senses and changes there name to Nash City but ducks still win 4-2 goals by Parros, Lilja, Perry,Teemu

*she is gonna kick my ass...but I think I'm ok with that

who wins in a Spade-Niesy-Columbus battle Royal?