Hey, we're at the halfway point of the season! That's exciting, right?

The Sharks have been hard to figure out this year. They've had struggles on offense, defense, and in goal. So, with half of the season behind us, are the Sharks headed in the right direction? Are they improving or getting worse? 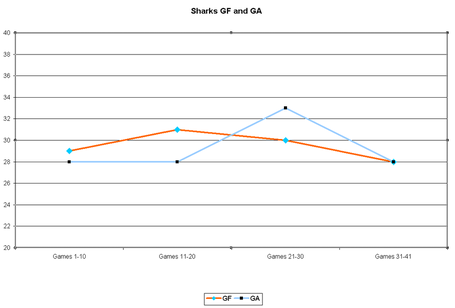 Breaking down the season thus-far into quarters, I looked at the Sharks' goals for and goals against. The orange line, goals for, barely moves. The blue line, goals against, went up a bit as the Sharks struggled and had some blowout losses, but has also remained fairly static. Judging by this graph, it's hard to say the Sharks are any better or worse  now than they were at the beginning of the season.

So what about their win-loss record for these same 10-game segments?

Once again, the only thing consistent about the Sharks this season is their inconsistency.

Prediction: Sharks win 3-1, with goals from Clowe, Couture, and Thornton. This begins their unprecedented second-half turn-around, in which they go 41-0 before losing in the first round of the playoffs.