Looks like Meg has been keeping busy since the Sharks last played, but not me!  I'm a professional crastinator!  Well, maybe not professional, but I'm very in favor of crastination.  Because I've known for a week that I was going to draw up a blog logo for Fear The Fin this morning, and yet didn't really pen or scan anything until last night.  Typical Sleek, right?

But despite waiting until the last minute yet again, the result isn't horrible.  Well, as a logo it's kind of terrible, but as a Sleektoon it's got its typical charm.  Run for it! 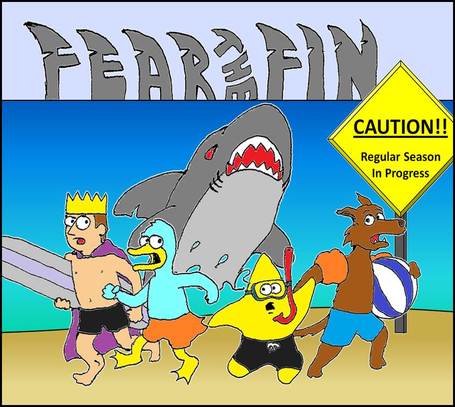 Last Saturday the Sharks hung their fourth straight Pacific Division title banner, which really is impressive except for the lack of postseason banners.  But it's a good enough achievement to get the rest of the Pacific Division featured as victims in this design -- plus, quite frankly, it's the easiest division to draw (hooray!).

As a logo, it's a bit shoddy -- the blog name is decent, but it's not really featured.  The yellow shark warning sign has an okay gimmick, but that'd get hidden if the cartoon got shrunk.  Same problem with a lot of the cartoon characters.  But I'm not really sure I care about those things too much -- for this project, it works!  Go crastination!  :)

The Sharks are certainly a scary opponent -- they outshot the Ducks by 60 shots in 6 games last season.  Yet somehow each team scored 17 goals and each picked up three wins.  Thanks, Sharks goalies!

We'll see what happens tonight.  I'll warn you now -- there's a strong likelihood I'm watching tonight tape-delayed an hour or two.  If I disappear from comments that'll be the reason.  But no matter what happens, it's awfully nice to have a meaningful BoC game again (I hope)!