Almost a week off between games 1 and 2, and then back to back games? Alright, whatever.

Here's the thing: I like to write my gameday posts a day or so in advance, if possible, and then make adjustments at the last minute to include the most recent scores and team news and stuff. But the Sharks are playing on a Saturday, and I'm going to be busy, so I'm not going to have time to sit down and write about the awesome victory/humiliating defeat against the Ducks on Friday night. If it were later in the season I could fake it and talk about recent trends for the Sharks, but that obviously won't work. It's still way too early to do any real analysis, and anyone who tells you different is a mad man.

I'll just throw a whole bunch of stuff I'm wondering about out here, and feel free to react to whatever you like in the comments:

1. Dallas isn't going to be a good team this year, are they? That can't possibly be true.

2. Why aren't the Kings scoring more?

3. How many goals will Joe Pavelski score this season? Probably a lot, right?

4. At what point did the writers of Lost decide the show was no longer about a complex mystery that they were going to eventually answer and was instead about the characters and their relationships?

5. If The Rum Diary isn't very good, will I be able to handle it without hurting myself or others?

After the jump I've got some amazing photoshop work featuring Sharks in the big city.

My 80th-favorite movie of all time is Cloverfield. While writing this post I found a really good Cloverfield-style picture of some of the Sharks walking around New York last year: 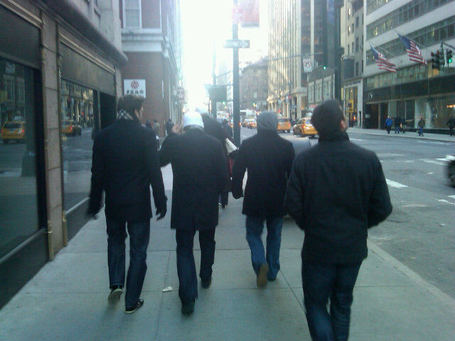 Oh, wait - that doesn't really work, does it? Cause I'm pretty sure that guy on the right is Devin Setoguchi. I'll just crop him out... 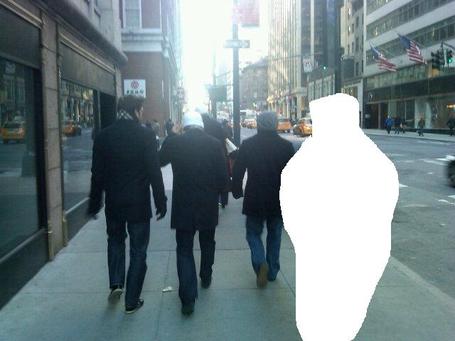 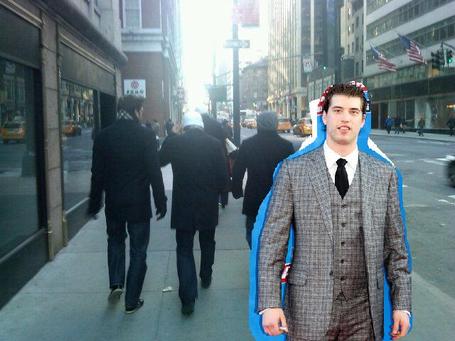