BoC Gameday -- And they're off!

Share All sharing options for: BoC Gameday -- And they're off!

Yay!  Another divisional cartoon this morning: 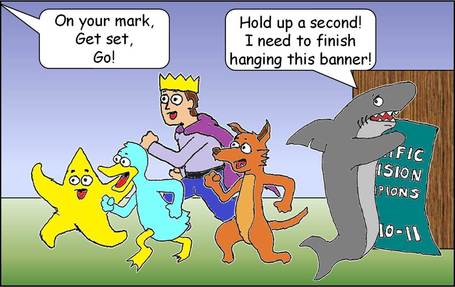 Woo hoo!  Ducks are second place in the Pacific Division and fourth place in the western conference!  Sure, these aren't tremendous feats, and it may only last for one day, but let's not forget -- last season the Ducks got to enjoy these accomplishments for one day only (fortunately it was the last one).  Best to celebrate them while we can.  :)

But the Sharks will be a very motivated opponent tonight -- they haven't won since two Saturdays ago.  Neither team plays again until Friday, so this could be a pretty hard-fought game.  Both teams would certainly savor a victory -- go October drama.

Per the ol' sponsor:

Tickets still available for Sharks game tonight vs the Ducks; Avg Price $87.  Get in for $45.  All deals here.

Prediction: I should be around tonight for game comments -- feel free to join in on the nonsense.  The Ducks outscored the Blues 4-2 and the Blues outscored the Sharks 4-2, so (scribbles some math) Ducks should win 16-4.  Goals by everybody except Getzlaf and Parros.