(Meg is swamped this week and I've never written one of these before. Good luck to both of us!) 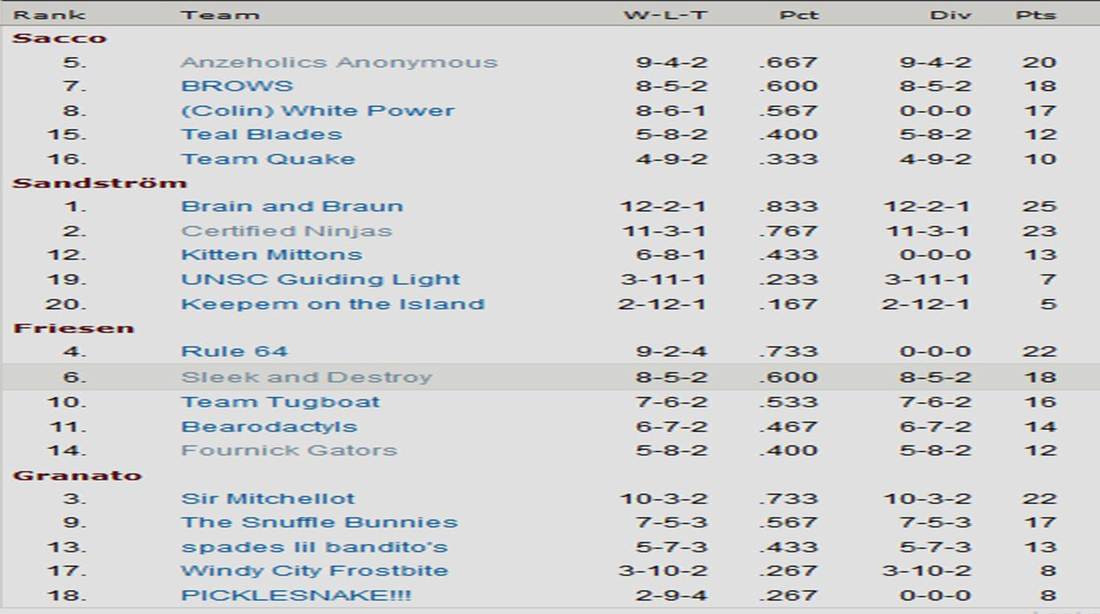 MVP: Kris Letang, who before his week two suspension picked up 5 assists and 15 SOG in week one; Bunnies won both those categories.

LVP: Evander Kane was pointless and a -2 and isn't even getting played many minutes in Winnipeg.

Spade did kick ass in his goaltending with Vokoun and Backstrom; the Bunnies' Luongo and Crawford only got one win apiece.

MVP: Pittsburgh's James Neale had five goals and 24 SOG in week one; Rudy won the SOG category by 24.

LVP: It's unfair, but San Jose's Marty Havlat hasn't played yet this season.  He only gets listed because Bearodactyls didn't put him in the IR slot.  Opportunity wasted!

Another instance where Bearodactyls won most of the goaltending categories but lost the week.  Skaters matter!

By far the most heavily contested goaltending battle, which ultimately got decided in the overtime of the Kings-Flyers game.  Thanks, JMFJ!

MVP: If you haven't heard, this Anze Kopitar fellow is pretty damn good.  3 goals + 4 assists for week one.

LVP: Quisp dropped Antti Niemi instead of putting him on the IR.  Then he got one goalie start out of Brian Boucher -- a loss.

Quisp has since added Jason Labarbera and J.S. Giguere -- let's hope those former BoCers can get him some goalie wins.

LVP: Not sure why Ang benched Dany Heatley for his debut -- she only got one assist out of the former Shark in week one.

Not a ton to choose from to highlight in this matchup -- BROWS' Erik Johnson led all skaters on both teams with four points.

MVP: Daniel Sedin had 2 goals and 5 assists -- he's playing like he got snubbed from some trophy or something.  And Jimmy Howard was 3-0.

LVP: Nut's goalies are all backups, and Bernier, Garon, and Rask failed to pick up a win in week one.  Still, it was good enough to split goaltending categories.

A very tight week one battle, but Plank comes out a slight victor.  Be wary, though -- seems Nut has pulled Sidney Crosby off the IR.

MVP: Goaltending was tight in this one, it seems, but Rule 64's Thomas, Varlamov and Khabibulin were able to out-start and out-win Picklesnake's Rinne, Greiss, and Brodeur.  And Jeff Skinner picked up six points despite being a -6.

LVP: Joe Thornton had zero points and was a -1.  He's the anti-Kopitar.

This matchup is probably the reason Meg is busy this week -- he's writing inspirational letters to all of his players.

MVP: Hooray!  Jonas Hiller is back!  He went 3-1 with a 1.71 GAA, .931 sv%, and one shutout.  Plus Certified Ninjas has the two Blue Jackets worth having -- Vinnie Prospal and Rick Nash combined for five goals and five assists.

LVP: Clarke MacArthur from the Leafs picked a tough time to be suspended -- can't put a guy on the IR for that.  Ryan Miller had a good week, but got no support from Rick Dipietro or the real Dan Ellis.

Let's hope Certified Ninjas used up all its mojo in week one -- I've got to play him for week two!

Brain and Braun vs. Keepem on the Island

MVP: New Jersey's Johan Hedberg ended up winning more games (3) than he started (2) this week.  He and Florida's Jose Theodore ended up putting up some stunningly good numbers.

LVP: Atlanta's Winnipeg's Dustin Byfuglien was pointless and a -3 for week one.  That's not unstomachable for a defenseman, but Keepem on the Island is using up a forward spot for the drunken boater.

Brain and Braun may be losing Jeff Carter for the next who-knows-how-long, but at least he also has Carter's top-line replacement in Derick Brassard.  We shall see how that band-aid holds.

MVP: Hey look!  It's another Sedin with a 2 goal, 5 assist week one.  Henrik and Patrick Kane led an offensive outburst -- Sir Mitchellot tied the league lead with 16 goals scored and led the league with a +27.

LVP: Awww, poor Lubo.  Pointless and a -4.  Little did Windy City Frostbite know that in the first two weeks of the season, the Ducks defenseman to have is Sheldon Brookbank!  :)

Windy City Frostbite was able to snag Antti Niemi off the waiver wire, so his previous pairing of Craig Anderson and Ray Emery will get a solid boost.

Anyways, that's that!  Brag about what went well in week one, and talk shit about what's going to improve for week two!