Share All sharing options for: Ducks Gameday -- What Almost Happened...

Have you ever come up with an idea that you weren't sure was going to be a good one or not?  Something that maybe could lead to something fantastic, but you need to get started on it a bit to see whether it will pan out or not?  And then, while sort of exploring that idea, you start realizing that it's way overambitious and super-nerdy and time-consuming and while possible to pull off, wouldn't really be worth all the trouble?  :)

That's what happened to me this morning.  The Ducks are starting a lengthy road trip today -- they'll hit seven cities over the next twelve days, all against teams I've already drawn blog logos for.  So I thought it'd be cool to have some long-running saga story throughout this lengthy road trip, and maybe with more time and research, it could have been done.  But I'm aborting this mission before it really starts -- it was going to be way too difficult considering the schedule and my laziness and the pain of divisional losing streaks and all.

But here's how it would have started, more or less...

Lord of the Road Trip, Part 1

Once upon a time in a faraway land called Middle Ice, there lived a blueline hobbit named Lubo Baggins.  He lived a simple life in Shireaheim, chumming along with his pals Camwise, Frenchy, and Lydpin. But then one day he was visited by the great wizard Getzdalf the Grey, who revealed that Lubo was in possession of the powerful Ring of No-Look Passes. 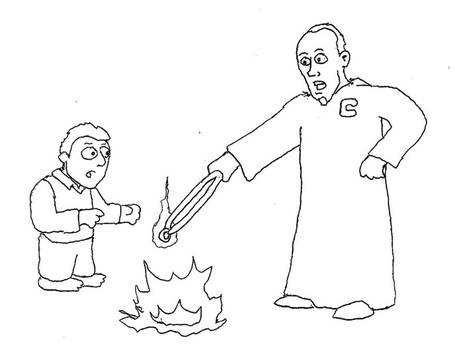 "It is a weapon whose power must be respected, but at the same time it can become the source of many turnovers," explained Getzdalf.  "I myself cannot be trusted with such a ring; even as I stand near it, I already suffer from high-risk delusions of over-creativity.  Only you can carry it, but do not be tempted to wear it!  Its consequences are too severe."

"No, you must take it to the heart of Detroirdor and see it destroyed."

So the four blueline hobbits embarked on their daunting quest to destroy the ring, but were almost immediately set upon by a roaming band of Ringhawks -- dark, menacing opponents who relentlessly pursued the ring's power.  The foursome scrambled to hide from the Ringhawks' offensive rush, but as their pursuers neared, Lubo could feel the ring calling to him: "Put me on, Lubo.  What's the harm in one little no-look pass?  It'd be an easy escape from the defensive zone." 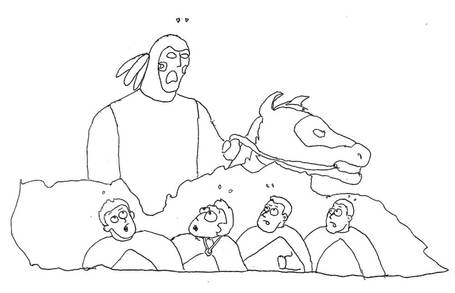 Lubo gave in and tried it, and it seemed to work -- the foursome managed to escape temporarily to the nearby town of Crease, where a lanky stranger named Perrygorn was spending way too much time.  But the no-look pass also focused the attention of the Ringhawks -- they knew their prize was nearby and increased their forechecking aggression.  Just as Perrygorn led the blueline hobbits out of Crease, they were attacked.  The hobbits and Perrygorn defended mightily, but in the fracas poor Lubo tried another blind pass and got injured as a result. 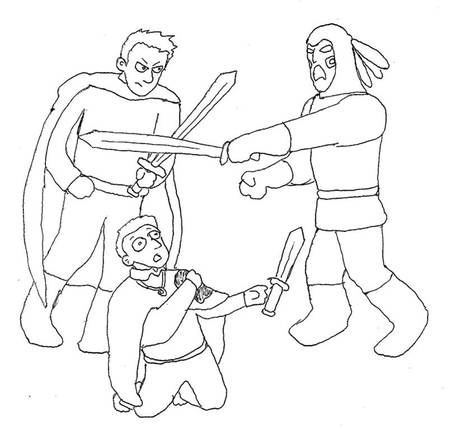 With Lubo losing consciousness, the group limped its way onwards to Forwardell, where the Elf King Elryan was able to come to their aid.  The Ringhawks were repelled and defeated, but the victory came at a high cost, and the torturous road trip had only just begun...

Tune in Thursday for Part 2 -- Fellowship of the Road Trip!

Anyways, it would have gone somewhat onwards from there.  You can take a look at my notes if you want, but they're not really that focused or organized -- I have very little idea how the rest of this would have gone.  All you really would have had to look forward to would have been Teemölas the Finnish Elf and Georgeli the Moustached Dwarf, and maybe I'll draw up those two for one of the games this trip. 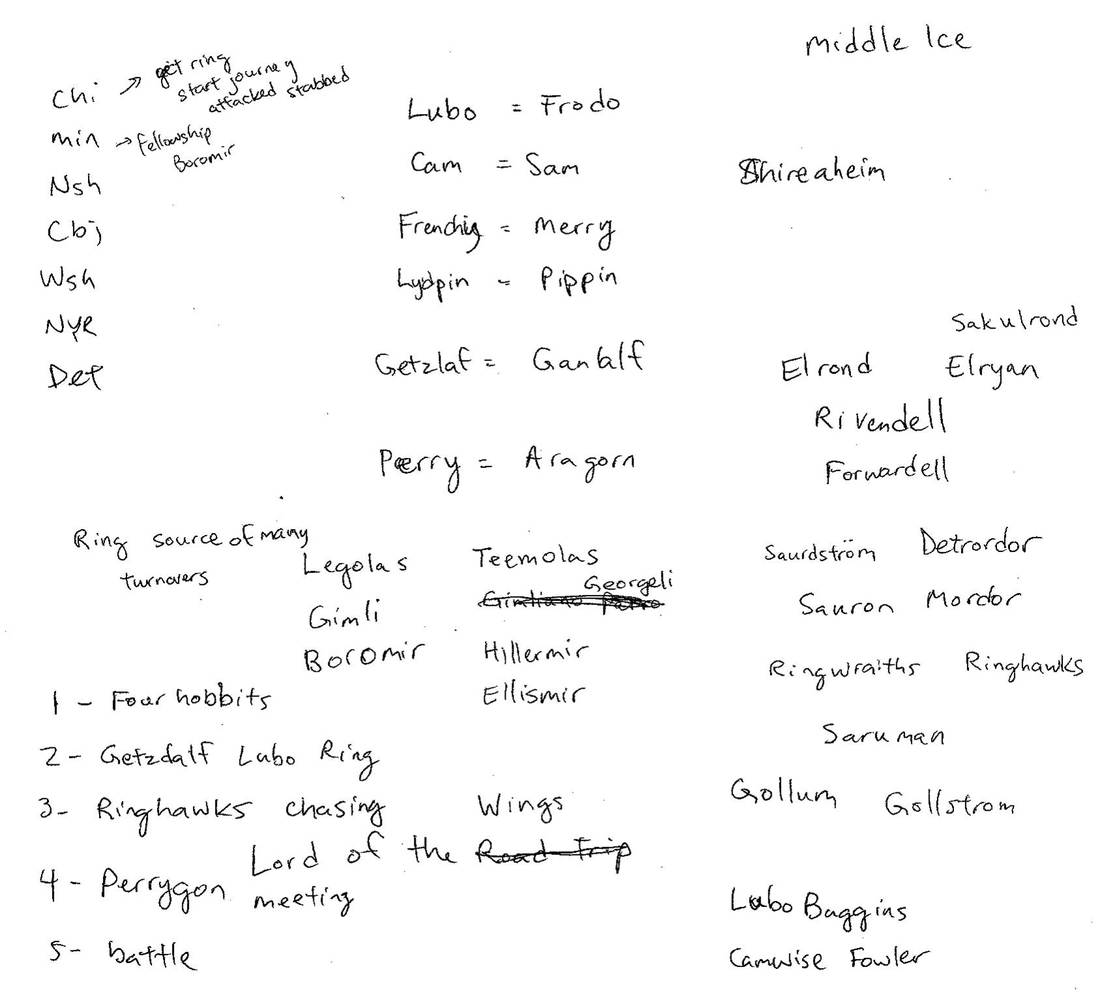 And while you might argue that the start of this saga has some legs and should be seen through, I'm really much more a Star Wars nerd than a LOTR nerd.  I'd need to catch up on the story and then adapt and draw it, and I probably don't have the energy to cram that in this tight a game schedule.

So sorry, nerds!  And for the rest of you, thanks, NHL schedule makers!  Saga aborted.  :)

Prediction: I'll be around for game comments tonight -- stop on by.  As per the start of the saga, Getzdalf the Grey and Lubo Baggins make too many blind passes and the Ringhawks burn them for it.  But the group does make it to Forwardell, and Elryan pots the game-winner.